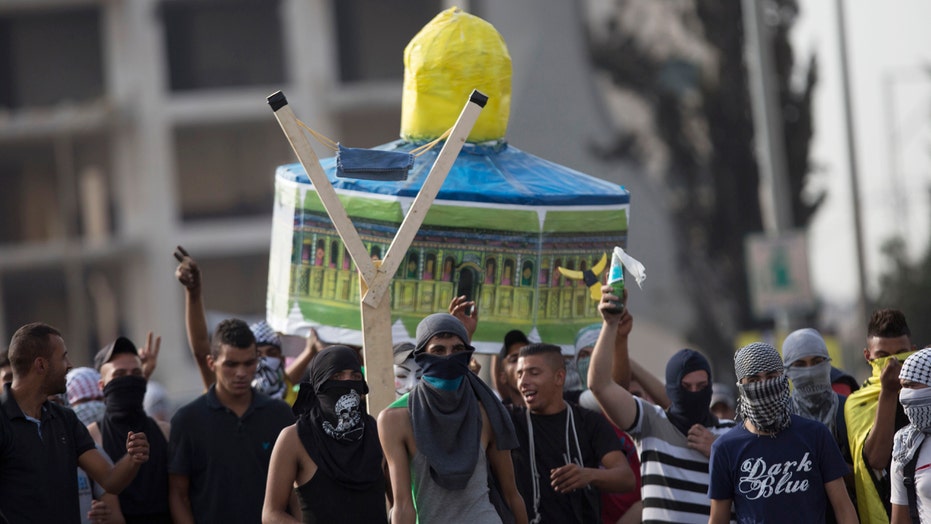 Israeli police say an Arab man stabbed an Israeli soldier on a bus and tried to seize his gun before he was shot and killed by an officer, the latest in a series of Palestinian attacks against Israelis.

Spokesman Micky Rosenfeld said the Arab had fought with another officer before he was killed.

Earlier Monday, two Palestinians stabbed and critically wounded a 14-year-old Israeli riding his bicycle, after attacking a 20-year-old as he walked down a street.

One of the attackers was apparently hit by a car and wounded. Police say they shot the other attacker and killed him when he ran at officers with a knife raised and ignored calls to stop.

The attack took place in Pisgat Zeev, a Jewish settlement in traditionally Arab east Jerusalem, which Israel seized in the 1967 war and annexed shortly thereafter. Palestinians have said they want east Jerusalem as the capital of their future state.

She said the officer shot and wounded the woman, whose condition was not immediately known.

In addition, police said they shot and killed a Palestinian man who attacked an Israeli officer with a knife. They said that attack took place near a gate of Jerusalem's walled Old City.

Samri told the Associated Press border police officers ordered the Palestinian to take his hand out of his pocket. She said the man then attacked the officer, who he was wearing a protective vest and was not injured.

Israeli Prime Minister Benjamin Netanyahu lashed out at Arab lawmakers in the Israeli parliament Monday, accusing them of participating in what he calls incitement fueling a wave of unrest. It came as Israeli police reported a series of stabbings targeting officers and at least one teenager.

Netanyahu accused Arab parties of "undermining" the country, saying that certain lawmakers have spoken in favor of violence against Israelis.

He called on Israel's Arab citizens to "kick out the extremists among you."

Netanyahu has blamed the violence on incitement by groups including the Islamic Movement, which runs religious and educational services for Arab citizens of Israel. Netanyahu is seeking sanctions on the group, which has led a campaign accusing Israel of plotting to take over a sacred Old City compound revered by both Jews and Muslims, a claim Israel denies.

Israeli police said they have arrested a local leader of the Islamic Movement in the Bedouin Arab town of Rahat in southern Israel who was suspected of organizing a group of protesters who vandalized security cameras and other property in the town on Friday, as demonstrations have been taking place in predominantly Arab cities throughout Israel.

The European Union's top diplomat, foreign policy chief Federica Mogherini, told Netanyahu and Palestinian President Mahmoud Abbas in phone calls Sunday evening to avoid action that could increase tensions, and called on both sides to agree on "substantial steps which would improve the situation on the ground" and lead to renewed peace talks, according to an EU statement.

Marwan Barghouti, a popular Palestinian figure who was convicted of planning deadly attacks on Israelis during the second intifada, published an op-ed in The Guardian newspaper Sunday saying the cause of recent violence was "denial of Palestinian freedom."

Barghouti, who was arrested in 2002 and is serving five life sentences, is seen as a possible successor to Palestinian President Mahmoud Abbas.