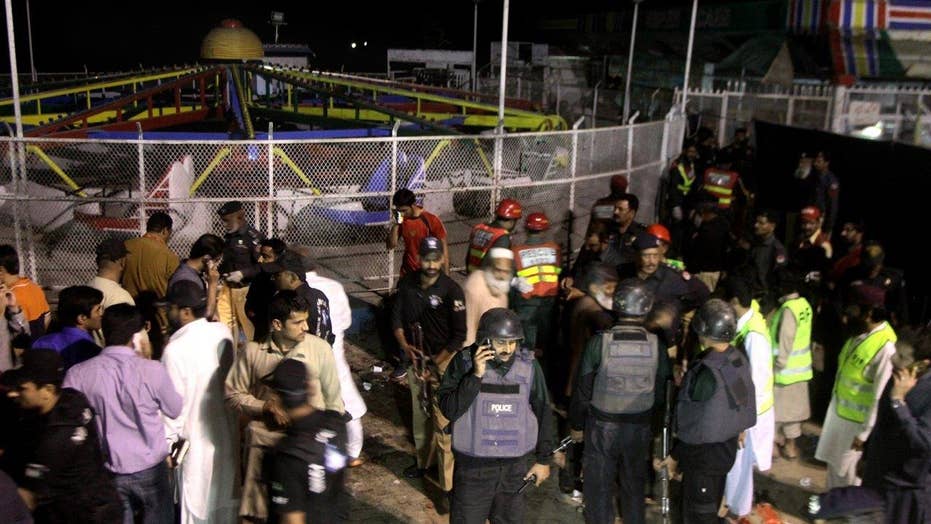 Dozens killed in Easter attack on Christians in Pakistan

At least 70 dead, 300 injured in bombing in Lahore, Pakistan

Pakistan's prime minister on Monday vowed to eliminate perpetrators of terror following the Sunday suicide bombing that targeted Christians gathered for Easter in the eastern city of Lahore, killing 70 people and injuring around 300.

In response to the attack, the military reportedly arrested dozens in raids in eastern Punjab, where several deadly militant organizations are headquartered.

And in Lahore, forensic experts sifted through the debris in the park where the suicide attack took place. The bomb had been a crude devise loaded with ball bearings, designed to rip through the bodies of its victims to cause maximum damage, counter-terrorism official Rana Tufail said. He identified the suicide bomber as Mohammed Yusuf, saying he was known as a militant recruiter.

The pope, speaking to the faithful in St. Peter's Square, said many of the victims were women and children and that Pakistan should "make every effort to restore security and serenity" to Pakistanis, particularly religious minorities in the largely Muslim Asian nation.

Rescue workers move a body from the site of a blast in Pakistan. (Reuters)

Ahsanullah Ahsan, a spokesman for the breakaway Taliban faction Jamaat-ul-Ahrar, which has sworn allegiance to ISIS, told The Associated Press late Sunday that the suicide bomber deliberately targeted Christians celebrating Easter in the park. The mostly-Muslim country has a small Christian community, accounting for less than two percent of Pakistan's total population.

The same militant group also took responsibility for the twin bombings of a Christian church in Lahore last year.

But most of those killed Sunday were Muslims, The Associated Press reported. Of the dead, 14 have been identified as Christians, Lahore Police Superintendent Mohammed Iqbal said. Another 12 bodies have not yet been identified, he added.

Shama Pervez, widowed mother of 11-year-old Sahil Pervez who died in the blast, was inconsolable during funeral prayers Monday. Her son, a fifth grader at a local Catholic school, had pleaded with her to go to the park rather than stay home on Sunday, and she said she finally gave in.

Women mourn the death of a family member who was killed in a bomb blast in Lahore, Pakistan. (AP)

The U.S. State Department did not respond Monday to a query as to whether it regarded the attack as one specifically targeting Christians.

In Turkey, President Recep Tayyip Erdogan condemned the Lahore bombing, saying that in targeting a park filled with children, the attack "revealed the face of terror, which knows no limits and values."

France expressed its "solidarity in these difficult moments" to the authorities and the people of Pakistan and underlined "the inflexible will of our country to continue to battle terrorism everywhere."

The attack underscored both the precarious position of Pakistan's minorities and the fact that the militants are still capable of staging wide-scale assaults despite a months-long military offensive targeting their hideouts and safe havens in remote tribal areas.

Security officials gather at the site of a blast in Lahore, Pakistan. (Reuters)

As the country began observing a three-day mourning period on Monday, riots erupted for a second day in the capital of Islamabad when extremists who have been staging a protest since Sunday surged toward the Parliament and other key buildings in the city center. The demonstrators set cars on fire, demanding that the authorities impose Islamic law or Sharia. The army was again deployed to subdue the rioters.

Extremists had marched into the city on Sunday in protest of the hanging of policeman Mumtaz Qadri in February. Qadri was convicted for the 2011 murder of Governor Salman Taseer, who was defending a Christian woman jailed on blasphemy charges. Taseer had criticized Pakistan's harsh blasphemy laws and campaigned against them.

The army deployed Pakistan paramilitary Rangers as well as about 800 additional soldiers from neighboring Rawalpindi to Islamabad, to protect the center, which houses main government buildings and diplomatic missions.

In recent weeks, Pakistan's Islamist parties have been threatening widespread demonstration to protest what they say is Sharif's leanings toward the West. They have also denounced provincial draft legislation in Punjab outlawing violence against women. Sharif also this month announced recognition of holidays celebrated by the country's minority religions, recognizing the Hindu festival of Holi as well as Easter.