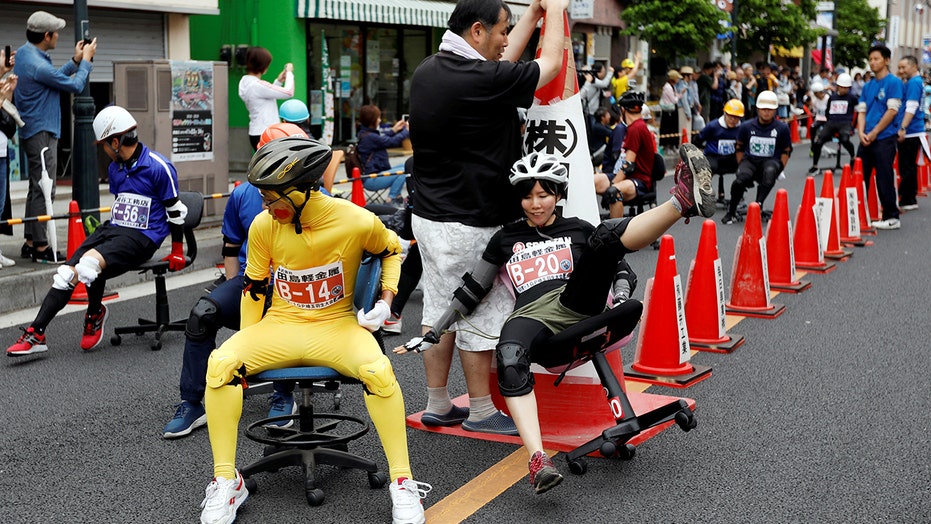 Competitors in Japan broke out the office furniture on Sunday for a good old-fashioned... office chair race.

The race, which took place in Hanyu, a city roughly 45 miles north of Tokyo, featured three-player teams rolling through a 200 meter race over the course of two hours in what was dubbed the "Isu" grand prix, Reuters reported.

"Isu" means chair in Japanese. The first such competition involving the simple sitting furniture reportedly started in Kyoto in 2009 and has been wildly popular. The race was just one of 10 scheduled to be held in Japan throughout the year.

“The origin of this race came to my head when I saw a tricycle endurance race,” Tsuyoshi Tahara, creator of the race, told Reuters. “Eventually I created the race which we can hold on a street, three persons per team for two hours of endurance."

Tsuyoshi Tahara, creator of the race, said he "wanted to create something no one has made before." (REUTERS/Issei Kato)

“I wanted to create something no one has made before," he added.

Racers mostly chose to move backward in the race, for which 55 teams signed up. Kitsugawa Unyu — the winning team — retained the title they won last year, and won nearly 200 pounds of locally grown rice.

The next "Isu" grand prix is reportedly scheduled to take place in the Iwate prefecture in July.