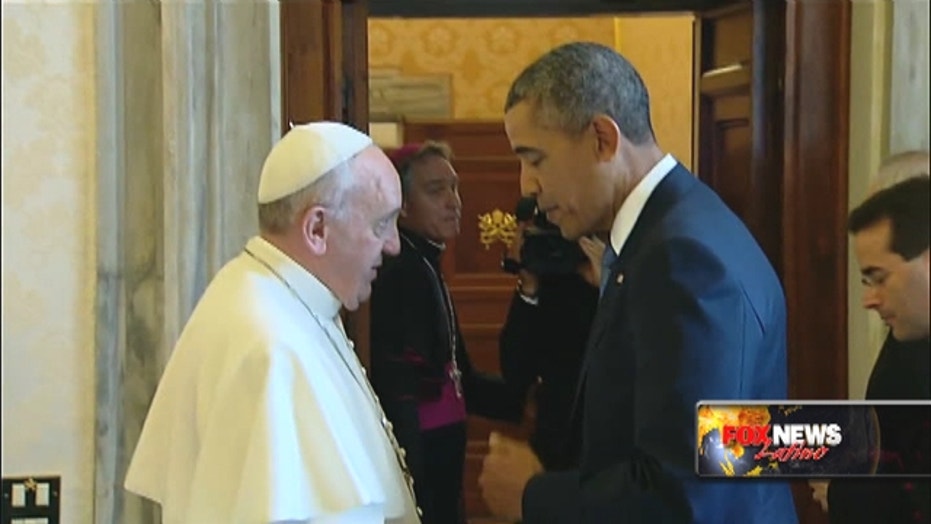 President Barack Obama meets with Pope Francis at the Vatican.

VATICAN CITY (AP) – President Barack Obama called himself a "great admirer" of Pope Francis as he sat down at the Vatican Thursday with the pontiff he considers a kindred spirit on issues of economic inequality. Their historic nearly hourlong first meeting comes as Obama's administration and the church remain deeply split on issues of abortion and contraception.

Obama arrived at the Vatican amid the pomp and tradition of the Catholic Church, making his way to greet the pope after a long, slow procession through the hallways of the Apostolic Palace led by colorful Swiss Guards and accompanied by ceremonial attendants. The president bowed as he shook hands with the pontiff in the Small Throne Room, before the two sat down at a wooden table in the Papal Library.

"It is a great honor. I'm a great admirer," a broadly grinning Obama said. "Thank you so much for receiving me."

The two were scheduled to meet for half an hour, but their private discussion lasted 52 minutes. Obama seem buoyed by the meeting as they emerged and the pope greeted a handful of Obama's senior advisers. Catholic Secretary of State John Kerry pronounced himself "a great admirer of everything you've been doing, as a Catholic, for the church."

Obama then presented the pope with a seed chest with fruit and vegetable seeds used in the White House Garden, in honor of the pope's announcement earlier this year that he's opening the gardens of the papal summer residence to the public. The chest was custom-made of leather and reclaimed wood from the Baltimore Basilica, one of the oldest Catholic cathedrals in the U.S, and inscribed with the date of their meeting.

As they meet, the six-year president, with his sinking poll numbers, would not be blamed for seeking some reflected glory from a pope who, one year into his pontificate, is viewed as an agent of change in the Roman Catholic Church.

Obama is the ninth president to make an official visit to the Vatican. His audience marks a change of pace for the president, who has devoted the past three days of a weeklong, four-country trip to securing European unity against Russia's aggressive posture toward Ukraine.

The pope whom Obama will sit with this time is a different pontiff than the last one to host him. Obama visited Pope Benedict XVI in 2009, a cordial meeting that nevertheless drew attention to the differences between the church and Obama on abortion.

To be sure, the relationship between the Obama administration and the Catholic Church is a fraught one. And Vatican officials say Obama will not leave without having heard Francis' views on Obama's health care law and its mandates for contraception coverage. But in Francis, the White House sees the popular pope and his emphasis on economic disparity as a form of moral validation of the president's economic agenda.

"Given his great moral authority, when the pope speaks it carries enormous weight," Obama said in an interview with the Italian daily Corriere della Sera published ahead of his papal visit. "He can cause people around to the world to stop and perhaps rethink old attitudes and begin treating one another with more decency and compassion."

Several presidents have found allies if not comfort in the pope.

President Ronald Reagan and Pope John Paul II famously shared an antipathy for the former Soviet Union, Reagan the Cold War warrior and the pope a Polish priest who fought communism in his country and later in Europe.

"Sometimes in these meetings there are compatible personalities," said Paul Begala, a former aide to President Bill Clinton and a Catholic himself. He recalled being with Clinton when the president met John Paul II in Denver.

"They were only supposed to meet alone for five minutes," he said in an interview earlier this year. "Those two gregarious, charismatic men sat in that room for an hour without another soul in there."

The Obama-Francis chemistry remains to be seen, but thematically both seem to be on some of the same pages.

Philadelphia Archbishop Charles Chaput, at the Vatican this week trying to secure Francis' attendance in Philadelphia next year, said he expected the Obama-Francis meeting to be good for both the U.S. and the Vatican.

"We have the most important religious figure in the world as part of that meeting, and one of the most important political leaders, so anytime the church and politics come together is an important moment for dialogue, discussion and the commitment to the common good," Chaput told reporters Tuesday at the Vatican.

Still, there are difficult areas of discord between U.S. bishops and the Obama administration over abortion and the administration's health care overhaul. U.S. bishops were among the most outspoken opponents of Obamacare, objecting to its mandatory coverage of contraception. The Supreme Court this week seemed divided when hearing arguments in a case in which companies argued that they have religious rights and can object to such coverage based on such beliefs.

Vatican officials noted that during the recent visit of Secretary of State John Kerry with his Vatican counterpart Cardinal Pietro Parolin, the cardinal raised the issue of the health care mandate. The Vatican statement issued after that meeting said Parolin had "expressed the concern of the U.S. bishops for the reforms in relation to the guarantee of religious freedom and conscientious objection."

Anticipating that the issue will be a topic of their meeting, Catholics for Choice published an ad in the International New York Times Thursday as an open letter to Obama declaring that "Francis' interpretation of church teachings does not represent that of the majority of Catholics, especially on issues related to sexuality, reproductive health and family life."

Francis faithfully backs church teaching on abortion — he has said he's a "son of the church" — but his emphasis and tone are elsewhere. He has said he wants his church to be more of a missionary, welcoming place for wounded souls rather than a moralizing church.

He caused a fuss in November when he decried some conservative economic theories as unproven. "The excluded are still waiting," he wrote.

Francis' attention to poverty has also captured the attention of Republicans, prompting some to stake out high-profile anti-poverty positions. House Speaker John Boehner, R-Ohio, has extended a formal and open invitation to the pope to address Congress when he visits the United States.

No doubt there is a political dimension to Obama's visit as well. The president won the Catholic vote in both of his elections, helped by heavy support from Hispanic Catholics. Some of that support has waned since.

Meanwhile, the Pew Research Center found that the pope remains hugely popular, with more than 8 in 10 U.S. Catholics saying they have a favorable view of the pontiff.