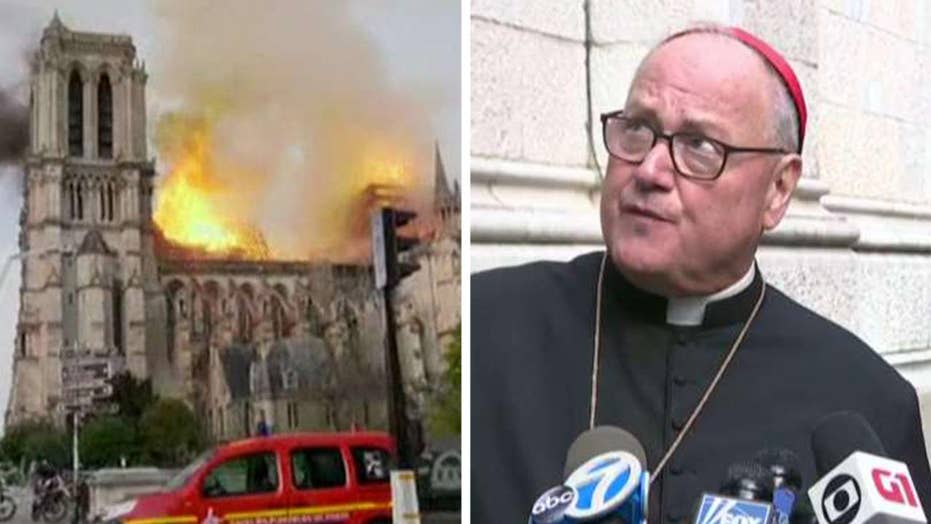 Cardinal Dolan: This is a moment of tears for Notre Dame

Cardinal Timothy Dolan, the archbishop of New York, cited biblical text to help make sense of the catastrophic fire that engulfed the upper reaches of Paris’ soaring Notre Dame Cathedral as it was undergoing renovations Monday.

“It affects all the senses,” he said. “I can see us rising from this dying.”

He added: “This fire won’t have the last word.”

The fire had been threatening one of the greatest architectural treasures of the Western world as tourists and Parisians looked on aghast from the streets below. Paris fire chief Jean-Claude Gallet said the church's structure remained intact.

The blaze collapsed the cathedral’s spire and spread to one of its landmark rectangular towers. A spokesman said the entire wooden frame of the cathedral would likely come down, and that the vault of the edifice could be threatened too.

Dolan offered hope amid the disaster continually at his New York City news conference: “This Holy Week teaches us that, like Jesus, death brings life. Today's dying, we trust, will bring rising.”

Dolan said the fire struck at the heart of civilization, a spiritual home that has endured moments of smiles and tears.

Earlier in the afternoon, Dolan tweeted: “I just went next door to our own beloved Cathedral, Saint Patrick’s, to ask the intercession of Notre Dame, our Lady, for the Cathedral at the heart of Paris, and of civilization, now in flames! God preserve this splendid house of prayer, and protect those battling the blaze.”

Built in the 12th and 13th centuries, Notre Dame is the most famous of the Gothic cathedrals of the Middle Ages as well as one of the most beloved structures in the world. Situated on the Ile de la Cite, an island in the Seine River, the cathedral’s architecture is famous for, among other things, its many gargoyles and its iconic flying buttresses.

Among the most celebrated works of art inside: its three stained-glass rose windows, placed high up on the west, north and south faces of the cathedral. Its priceless treasures also include a Catholic relic, the crown of thorns, which is only occasionally displayed, including on Fridays during Lent.

“It was with horror that I saw the pictures of Notre Dame Cathedral in Paris ablaze.  Having visited that magnificent gothic Church and prayed in it many times, I join all of those in France and elsewhere who receive this news with such pain,” Cardinal Donald Wuerl of the Archdiocese of Washington said in a statement to Fox News.

“In a special way, we offer our prayers and express our solidarity with all the people of France and particularly the faithful of the Church of Paris of which Notre Dame is the Cathedral.”