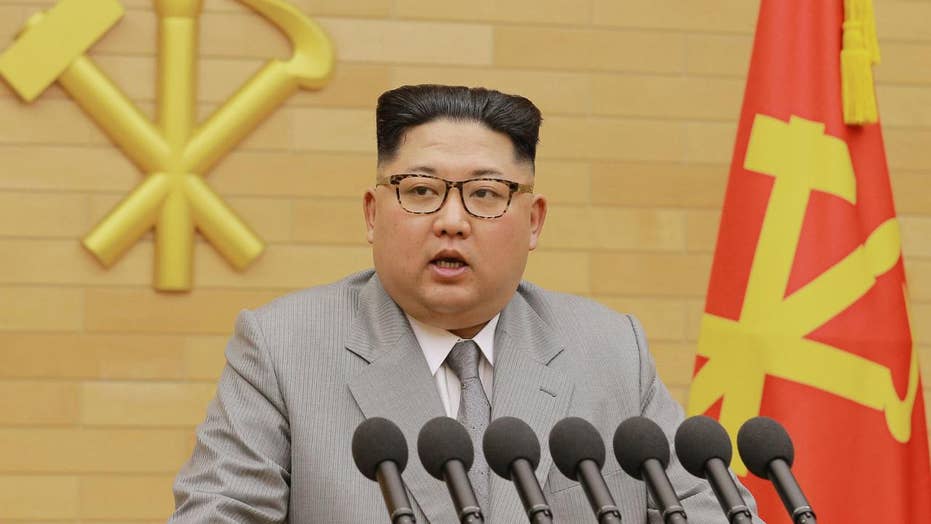 How the US should handle North Korea in 2018

South Korea offers to have talks with the rogue regime.

The two rival nations were communicating through the channel at the border village Panmunjom, the South’s Unification Ministry said.

Officials said they were first trying to examine whether the communicating lines were working well.

July 27, 2017: North Korean soldiers watch the south side as the United Nations Command officials visit after a commemorative ceremony for the 64th anniversary of the Korean armistice at the truce village of Panmunjom in the Demilitarized Zone (DMZ) dividing the two Koreas. (Reuters)

Ri Son Gwon, chairman of the Committee for the Peaceful Reunification, made the announcement on Kim Jong Un's behalf, according Seoul's Unification Ministry.

Ri said North Korea will try to engage with South Korea in a "sincere and careful" manner by "upholding the will of the supreme leader," in a reference to Kim, the ministry said.

Although the development is a positive sign that the Koreas are working toward improved ties, there’s no guarantee that tensions will ease. There have been repeated attempts in recent years by the rivals to talk, and even when they do meet, the efforts often end in recriminations or stalemate. North Korea didn't say whether it would accept the South Korean offer for talks.

Meanwhile, President Donald Trump lashed out at the North Korean dictator on Tuesday, reprising his “rocket man” label for Kim and arguing that U.S. sanctions are working against North Korea.

Trump later tweeted his “nuclear button” is larger and “more powerful” than Kim’s.

“North Korean Leader Kim Jong Un just stated that the 'Nuclear Button is on his desk at all times,'” the president tweeted. “Will someone from his depleted and food starved regime please inform him that I too have a Nuclear Button, but it is a much bigger & more powerful one than his, and my Button works!”