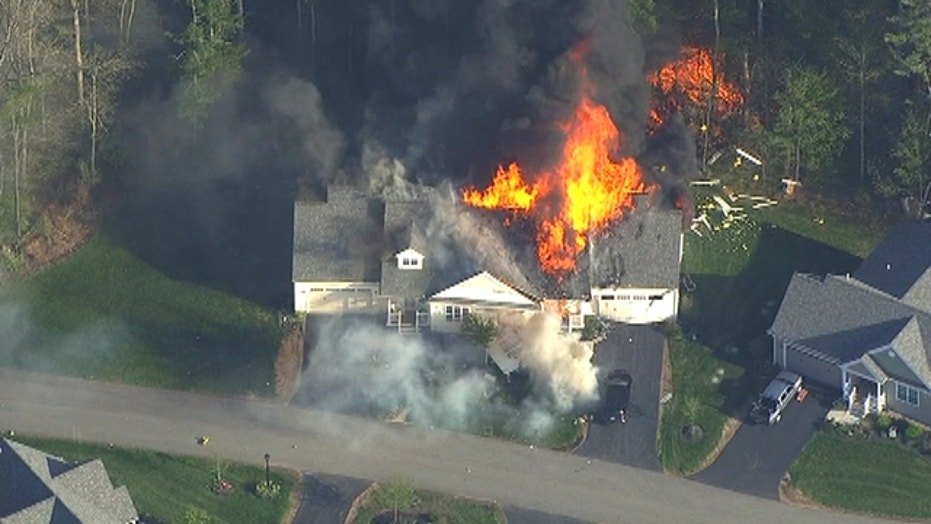 Firefighters were battling intense flames at a house that was the scene of an officer-involved shooting in the town of Brentwood, N.H.

BRENTWOOD, N.H. (AP) – A domestic dispute that may have involved a father and a son turned deadly when a police officer was fatally shot by a man who authorities say later died in a roaring house fire in southern New Hampshire.

Suspected gunman Michael Nolan, 47, was presumed dead Monday after a late afternoon fire demolished the duplex in a tree-lined neighborhood restricted to people 55 and older.

State Attorney General Joseph Foster said Monday night that Brentwood police officer Stephen Arkell, 48, answered the domestic dispute call at about 4 p.m. and was fatally shot when he arrived at the house. A second officer tried to enter but was driven away by gunfire.

About an hour after the shooting, the house burst into flames and video showed flames eating through the roof of the modern yellow building. Firefighters were kept away from the scene and soon a massive explosion blew the front off the house. Within an hour, it was leveled.

Nolan is the son of the homeowner, 86-year-old Walter Nolan.

Arkell, who was married and had two teenage daughters, worked for the Brentwood Police Department for about 15 years as a part-time officer. He helped coach the girls' lacrosse team at Exeter High School, where both of his daughters play.

Gov. Maggie Hassan directed that flags fly at half-staff in honor of Arkell.

"The entire state of New Hampshire is in mourning over the tragic loss of Brentwood Officer Steve Arkell," she said in a statement. "Officer Arkell bravely answered the call of duty and made the ultimate sacrifice, a heroic demonstration of his commitment to the safety of his fellow citizens.

"Like so many of our first responders do on a daily basis, Officer Arkell courageously put his life on the line to protect others, and in doing so, was tragically taken far too soon," she said.

Among those extending their condolences was the police department in Greenland, about 20 miles away, which lost its police chief, Michael Maloney in a hail of gunfire in April 2012 during a drug raid.

"Our thoughts and prayers are with our Brothers and Sisters in Brentwood," the department posted on its Facebook page.

Debra Vasapolli, director of public relations at Exeter Hospital, said one person was taken to the hospital but said that person was not the victim of a gunshot wound. She declined to provide more details or say if the victim was the elder Nolan.

Neighbor Wayne Hughes told the Portsmouth Herald that police responded to the house after neighbors heard an argument Monday afternoon and called 911. His wife, Susan, said she saw a police officer arrive at the home and then heard "rapid gunfire."

She said she saw Walter Nolan being taken from the scene by ambulance before she was evacuated from the area.

Aerial coverage from WMUR-TV showed flames burning through the roof of the house and an explosion punching out the front of the house shortly after 5:30 p.m. Within minutes of the explosion, the house was engulfed in flames as black smoke billowed over the neighborhood.

Firefighters started attacking the blaze around 6 p.m. It was largely out about a half-hour later and didn't appear to have spread to neighboring houses.