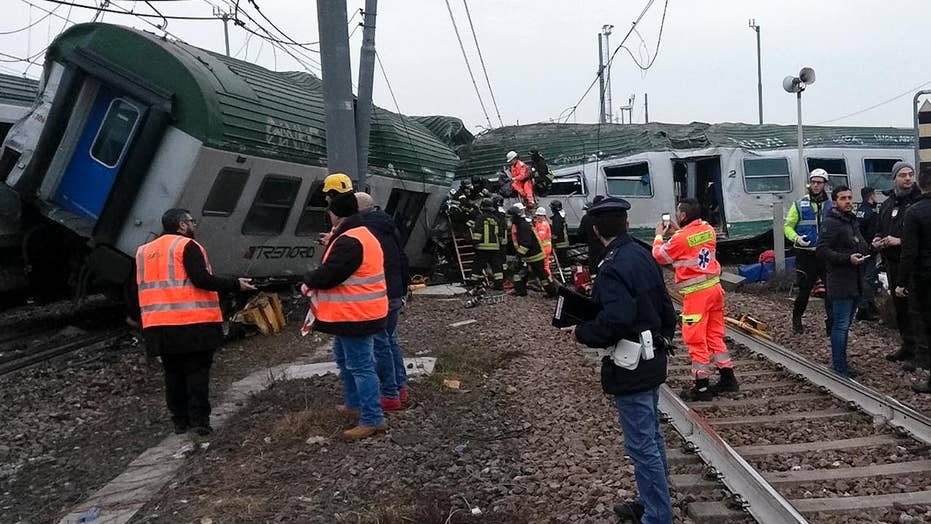 Crews search for survivors after deadly train crash in Italy

Authorities say cause of commuter train derailment in northern Italy is under investigation; Amy Kellogg reports from Milan.

An Italian commuter train derailed Thursday morning near Milan, killing three people and seriously injuring at least 13 others as some passengers became trapped in mangled cars.

The Trenord train derailed near Pioltello Limito station, less than 13 miles outside of Milan, at a switch track. At least two cars from the middle of the train moved off the rails and were left standing at an angle.

At least 13 other people were seriously injured after a train derailed in Milan, Italy. (ANSA)

“There currently are three dead, five severely injured and eight injured in ‘code yellow,’ all of which in hospital,” an Interior Ministry in Milan spokesperson told Reuters.

Train traffic into and out of Milan was halted for hours after rescuers removed passengers that were caught in the cars. Commuters said they felt the car shake for a few minutes before hearing a big bang. Next came the car's roof and walls caving in on them.

"Two carriages were half-worn, [it was] a chilling scene,” A passenger told Italy’s Rai News. "And I was lucky to get [sic] another car that is not derailed."

"There seemed to be some stones under the train and then the train stopped, they made us get off and the rescue arrived half an hour later," one person said.

Another passenger told ANSA: "It was all right, suddenly the train started to shake, then there was a roar and the carriages came out of the tracks."

Authorities are investigating what caused the crash, but said some structural collapse was detected — though it has not been directly linked to Thursday's derailment, Reuters reported. RFI regional director Vincenzo Macello also said the tracks and maintenance work were regularly conducted.

The train was heading from Cremona, in eastern Lombardy, to Milan’s Garibaldi station that morning.

Trenord, a regional train company serving the Lombardy region, has a notorious track record among riders. People often complain the trains are dirty, packed with people and delayed.

The company’s social media page said the delays due to the train derailment were caused by a “technical inconvenience.”

It was the latest incident involving Italy's aging rail system. In 2016, 23 people were killed when two trains collided on a single track in an olive grove in Puglia, southeastern Italy. In 2009, 32 people were killed when a freight train carrying liquefied petroleum gas derailed and exploded in Viareggio, in central Italy's Tuscany region.