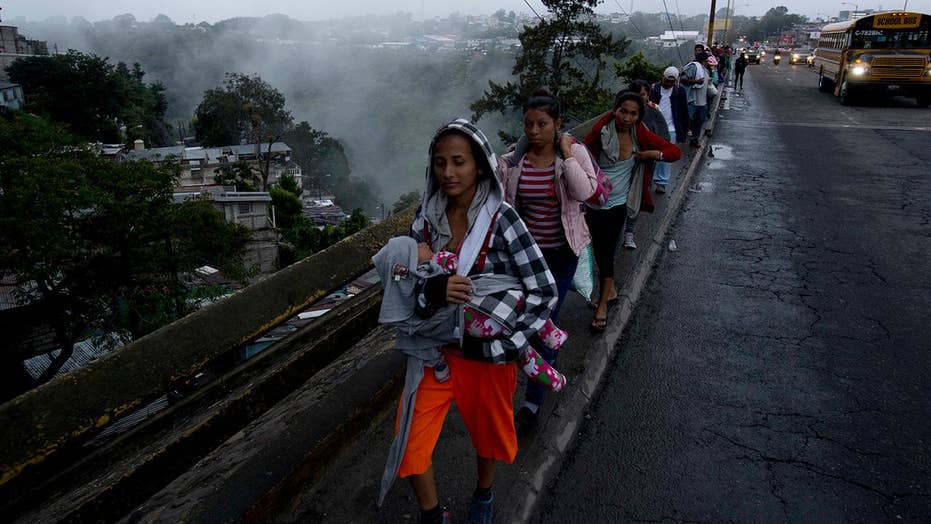 Can Mexico stop the migrant caravan from Central America?

The 4,000-person strong migrant caravan pushing north through Central America towards the United States reportedly stalled Friday morning at Guatemala's border with Mexico, where members debated the next step – including the possibility of an impending mass crossing attempt.

The caravan, which initially took shape as a means to escape the pervasive poverty and violence in Honduras, arrived at the Guatemalan border town of Tecun Uman on Thursday night.

The group's vanguard had arrived there earlier Thursday after hitching rides, and a few brazen members even tried to cross a bridge over the Suchiate River into Mexico -- but those migrants were ultimately stopped by Guatemalan police, according to the Associated Press. Other members of the group discovered a safe route into Mexico and were already requesting refugee status Friday morning, the Mexico Foreign Ministry announced.

The rest of the caravan, numbering in the thousands, have reportedly discussed another plan: A massive cross-border push designed to overwhelm any security forces with its sheer size.

A member of Pueblo Sin Fronteras, a group that helps organize caravans, told migrants in Tecun Uman on Thursday night the group would try to cross en masse on Saturday morning, the Associated Press reported.

Hundreds of Honduran migrants stand at the shore of the Suchiate river on the border between Guatemala and Mexico, in Tecun Uman, Guatemala. (AP)

Elsewhere in Mexico on Thursday, authorities arrested Irineo Mujica, the leader of the Pueblo Sin Fronteras -- or People without Borders -- group.

Mujica, who had previously led a migrant caravan to the U.S. border in the spring, said he was detained during a peaceful march. A video circulating on social media appeared to show police and immigration agents pushing Mujica into an immigration agency van amid a crowd of people. Mujica appeared to be resisting the officials.

US, MEXICO AGREE ON PLAN TO HANDLE MIGRANT CARAVAN FROM HONDURAS

Mexico has said the Hondurans in the current caravan would not be allowed to enter as a group, and members would either have to show a passport and visa — items few of the migrants have — or apply individually for refugee status, a process that can take three months for approval. Mexican officials also said migrants caught without papers would be deported.

In a statement, the country's foreign ministry said the “government of Mexico maintains permanent communication with the members of the caravan that have reached the southern border, to whom the options to which they are entitled have been explained.”

Honduran migrants sing their national anthem standing at the shore of the Suchiate river on the border between Guatemala and Mexico. (AP)

President Trump on Thursday morning warned Mexico he would deploy the U.S. military and close America's southern border if officials there couldn’t stop the caravan.

“I must, in the strongest of terms, ask Mexico to stop this onslaught — and if unable to do so I will call up the U.S. Military and CLOSE OUR SOUTHERN BORDER!” Trump tweeted.

Trump later added: “Thank you Mexico, we look forward to working with you!” while highlighting a video showing Mexican police officers arriving at the Guatemala border to meet the migrant caravan.

Two busloads of those police officers were visible on the Mexican side of the bridge from Tecun Uman on Thursday, the Associated Press reported. Metal barricades were stored to one side, but had not yet been deployed.

One of the migrants waiting in the town, 22-year-old Jonathan Perales, arrived with his wife, Heidy, and the couple's daughters, ages 2 and 4. Perales said the group had been traveling since 4 a.m. and finally arrived by bus at the border after dark.

"It was a great sacrifice, but it's all for a better life," he told the AP. "It's not all good. We're wet and we still don't have a place to sleep."

Hundreds of other migrants were seen walking to the river's edge, where they sang the national anthems of Honduras and Guatemala.