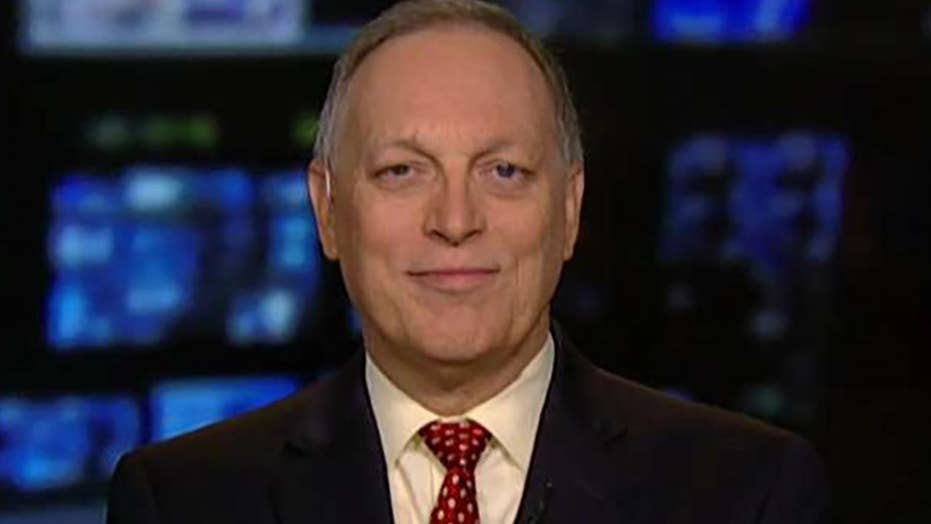 President Trump is reportedly weighing executive action to prevent the caravan of migrants from Central America from entering the U.S.; reaction from Rep. Andy Biggs of Arizona.

A 26-year-old Honduran died Sunday after he was struck in the head with a rubber bullet as the second group of migrants formed near an international bridge that connects Guatemala and Mexico, a report said.

The death was reported by Guatemalan firefighters and was believed to have occurred during a violent clash after migrants had reportedly broken through a gate on the Mexican side of the border. Mexico denied any responsibility in the death, and said its own immigration agents and police had been pelted with rocks and glass bottles.

Alfonso Navarrete Prida, the Mexican interior secretary, said some of the attackers carried guns and firebombs.

Video from the Guatemalan newspaper Prensa Libre showed men arguing with Mexican immigration officials through the metal bars of a gate separating the two countries.

Reports of the second group come at a time the U.S. is working to find a solution to prevent the first group from gaining entry. The first group has about 4,000 people and still must travel 1,000 miles to reach McAllen, Texas.

Mexican President Enrique Pena Nieto launched a program Friday dubbed “You are home,” which promises shelter, medical attention, schooling and jobs to Central Americans who agree to stay in the southern Mexico states of Chiapas or Oaxaca, far from the U.S. border.

Mexico’s interior minister said Sunday that temporary identification numbers had been issued to more than 300 migrants, which would allow them to stay and work in Mexico. The ministry said pregnant women, children and the elderly were among those who had joined the program and were now being attended at shelters.

He said 1,895 had applied for refugee status in Mexico.

U.S. Defense Secretary Jim Mattis announced that the military already has started delivering countermeasures to the southern border of the U.S., as Fox News previously reported.

The Pentagon has sent jersey barriers in conjunction with plans to deploy active-duty troops there, and full details of the number of troops to be deployed as well as their roles would be announced Sunday night, he told reporters.

During an appearance on “Fox News Sunday,” Homeland Security Secretary Kirstjen Nielsen vowed that the caravan “is not getting in.”