A group of men, part of a caravan of thousands of migrants from Central America en route to the U.S, pulling down a border gate with the intention to carry on their journey, in Tecun Uman, Guatemala. (REUTERS/Carlos Garcia Rawlins)

More than a hundred Central American migrants have forced their way through a customs gate at the Guatemalan border town of Tecun Uman to request passage into Mexico.

A Mexican official said Sunday that the group is seeking entry via Ciudad Hidalgo, Mexico.

Video from the Guatemalan newspaper Prensa Libre showed men arguing with Mexican immigration officials through the metal bars of a gate separating the two countries.

Mexican immigration officials in the video urged the men to bring families to the front of the line and present their requests for transit in an orderly manner.

Cesar Quinonez, a volunteer firefighter in Tecun Uman, told The Associated Press by phone that several Guatemalan police officers and migrants were injured as the group kicked and pushed its way through the gate on the Guatemalan side of the border. He said several people received medical treatment for exposure to tear gas fired by police.

A larger group of thousands of Central American migrants has been winding its way through southern Mexico with the goal of reaching the U.S. border. Mexico has offered them asylum if they remain in the southern states of Chiapas and Oaxaca.

Men throw stones to the Mexican Police after they pull down the border gate with the intention to carry on their journey in Tecun Uman, Guatemala. (REUTERS/Carlos Garcia Rawlins)

The news came the same day that Defense Secretary Jim Mattis announced that the military already has started delivering countermeasures to the southern border of the U.S., as Fox News previously reported.

The Pentagon has sent jersey barriers in conjunction with plans to deploy active-duty troops there, and full details of the number of troops to be deployed as well as their roles would be announced Sunday night, he told reporters.

During an appearance on “Fox News Sunday,” Homeland Security Secretary Kirstjen Nielsen vowed that the caravan “is not getting in.” 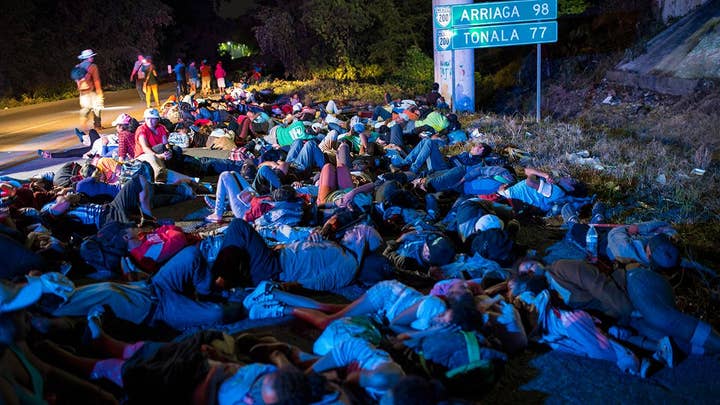 “There’s a legal way to enter this country,” she said. “Those who choose to enter illegally will be stopped. We are working with our partners in Mexico. They have taken unprecedented efforts within their territory to ensure an orderly flow and that those who have no legal right to be there are removed. We intend to do the same.”

Nielsen soon addressed the convoy itself.

“My general message to this caravan is: Do not come,” Nielsen said. “You will not be allowed in. ... There is a right way to immigrate to the United States,” she continued, “and this is not it.”