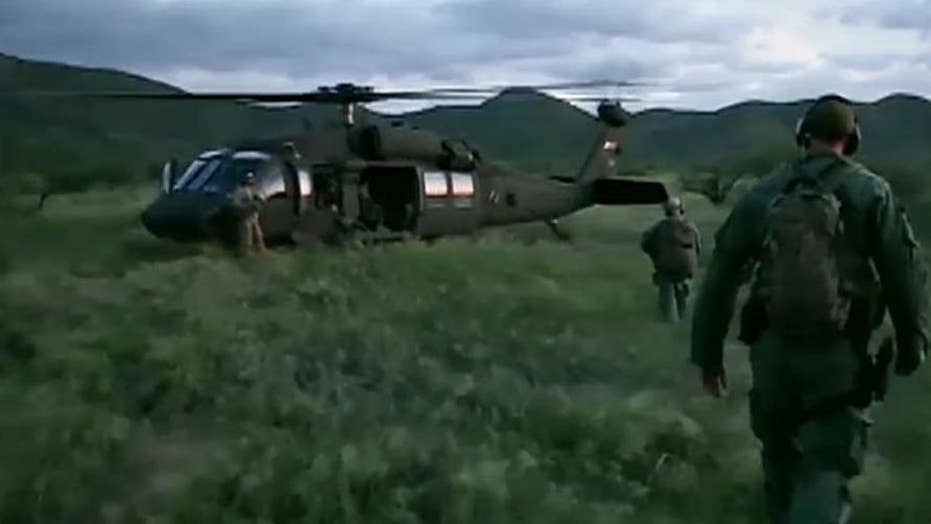 US troops deployed to Mexico border ahead of caravan

The Pentagon says the military will provide barricades and fencing as well as support in the air through helicopters and airplanes to help move Border Patrol agents.

Defense Secretary Jim Mattis announced Sunday that the military has already begun delivering countermeasures to the southern border, following reports over the weekend that Mexican police toting plastic shields abandoned their blockades in the face of a swelling Central American migrant caravan making its way to the U.S.

The Pentagon has sent jersey barriers in conjunction with plans to deploy active duty troops there, and full details of the number of troops to be deployed as well as their roles should be announced Sunday night, Mattis told reporters.

His comments come as Homeland Security Secretary Kirstjen Nielsen vowed on "Fox News Sunday" that the caravan "is not getting in."

"My general message to this caravan is: Do not come," Nielsen said. "You will not be allowed in. ... There is a right way to immigrate to the United States," she continued, "and this is not it."

U.S. officials announced Monday that 5,000 soldiers will be sent to the area. The troops will bolster the efforts of the approximately 2,100 National Guard forces already there.

The caravan, which has contained as many as 7,200 people and is currently approximately 1,000 miles from the closest border crossing with the U.S., has become a major issue with less than two weeks before the pivotal Nov. 6 midterm elections.

The group has traversed about 30 miles per day since forming in Honduras, with many members saying they are fleeing the violence and widespread poverty there.

The tensions of a long trek through searing heat with tenuous supplies of food and other goods spilled over Saturday night when a dispute over a food line evolved into the beating of a man falsely accused of child stealing.

Raul Medina Melendez, security chief for the tiny municipality of Tapanatepec in Oaxaca state, said the town was distributing sandwiches and water to migrants camped in the central square Saturday night. When a man with a megaphone asked people to wait their turn, some men hurled insults at him. "Finally people got really angry and those below began to attack the guy," Medina said.

As the man ran, a false rumor spread that he had grabbed a child for protection and he was caught and beaten. Police rescued him and took him to a hospital for treatment, though his condition wasn't immediately clear.

On Sunday, several in the caravan took to microphones to denounce the attack. "Is that the way we're going to always behave?" a woman from Honduras asked. "Anytime there's a rumor everyone is going to run to beat up someone?"

"This is not a spontaneous caravan of vulnerable people."

Vice President Pence this week warned that the migrant caravan is being funded by outside, leftist groups, citing intel said to be provided by foreign partners and a phone call with a Central American leader.

“What the president of Honduras told me is that the caravan was organized by leftist organizations, political activists within Honduras, and he said it was being funded by outside groups, and even from Venezuela,” Pence told Fox News in an interview late Friday in Yuma, Arizona. “So the American people, I think, see through this – they understand this is not a spontaneous caravan of vulnerable people.”

President Trump has sharply criticized Guatemala, Honduras and El Salvador for not doing more to stop the caravan, and he has even threatened to cut off aid to those countries in retaliation.

He has also claimed there are "criminals and unknown Middle Easterners” mixed in with the caravan, and Homeland Security officials confirmed last week that among the thousands of migrants heading for the United States border are some “gang members” and people with “significant criminal histories.”

On Saturday, more than a hundred Mexican federal officers allowed the thousand of migrants to cross a bridge they had barricaded, after representatives from Mexico's National Human Rights Commission told police that a rural stretch of highway without shade, toilets or water was no place for migrants to entertain offers of asylum in Mexico.

Police boarded buses and headed further down the highway, while migrants cheered and vowed to trek all the way to the U.S. border.

Mexican President Enrique Pena Nieto launched a program on Friday dubbed "You are home," which promises shelter, medical attention, schooling and jobs to Central Americans who agree to stay in the southern Mexico states of Chiapas or Oaxaca.

Police commissioner Benjamin Grajeda said that authorities only blocked the highway Saturday to tell people about the government's offer. "Here in this truck right now you can get help," he said.

Thousands of migrants in the city of Arriaga rejected the plan Friday night, but said they could be willing to discuss it again once they reach Mexico City. Some fear they will be deported if they take advantage of the program.