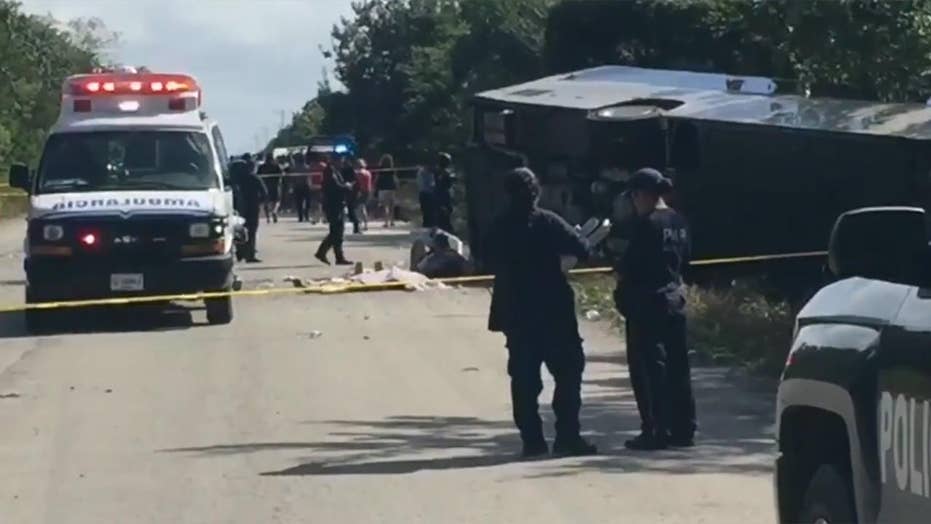 An American grandmother, an 11-year-old boy, and a couple from Washington state were among 12 people killed in a bus crash in Quintana Roo, Mexico, on Tuesday.

Passengers from Royal Caribbean cruise ships were being transported to the Chacchoben Ruins in Costa Maya, along the eastern coast of Mexico, when the bus overturned.

Authorities have now determined that driver negligence and excessive speed caused the crash. A preliminary manslaughter investigation indicated the driver lost control of the bus and when he tried to get it back on the narrow highway, the bus flipped, struck a tree and landed in vegetation along the roadside, the Associated Press reported.

"We can confirm the death of multiple U.S. citizens in a bus accident in Quintana Roo, Mexico, on December 19,” a State Department official said in a statement following the incident. "We are aware of several U.S. citizens injured in the accident."

Multiple U.S. citizens were killed in Mexico on Tuesday when a bus overturned on the road, along the eastern coast of Mexico. (Novedades de Quintana Roo via AP)

“We express our heartfelt condolences to all those affected by this tragedy. We are in contact with local authorities, and will continue to monitor the situation. We have staff on the scene and at local hospitals to assist victims and loved ones,” the official added.

Overall, eight Americans, two Swedes, a Canadian and a Mexican tour guide died in the crash.

Below is what we know so far about the victims.

Fanya Shamis, a 78-year-old grandmother from Coconut Creek, Fla., was among those killed, her grandson, Benjamin Shababo, 18, told the Sun-Sentinel.

He added that other family members were involved in the crash.

“We don’t have really concrete information,” Shababo said. “We’re all scared. It’s just really scary to process this in my head that possibly something really bad happened to them.”

Anna Behar and her son, Daniel, died in the bus crash. (Facebook)

Daniel Behar, 11, and his mother, Anna, 46, were both killed in the crash Tuesday.

Anna's mother, and Daniel's grandmother, was Fanya Shamis, who also was killed in the crash.

A family uncle told WUSA that both Anna and Daniel, of Lorton, Va., died when the bus crashed.

Jody and Andy Fritz were killed in the bus crash on Tuesday. (Facebook)

Jody and Andy Fritz, both 51 and of South Sound, Wash., were both killed in the bus crash, The Olympian reported.

Jody, who reportedly began working as an assistant principal at an elementary school in September, "was just a down-to-earth person who was committed to the education of children," the school's superintendent, Dana Rosenbach, said.

Andy was an environmental science instructor at a technical college and was "well known in the South Sound running community," the News Tribune reported.

The couple met in Massachussetts and reportedly leave behind their two sons.

Stephanie Horwood of Gatineau, Canada, was among those killed in the crash. She was a week shy of celebrating her 42nd birthday, CTV Ottawa News reported.

“There’s honestly so much I can say about her but words would never do her justice,” longtime friend Michelle Earle told the Ottawa Citizen of Horwood. “She was an incredible person, full of life and love.”

A church in Tennessee confirmed that one of its parishioners, Bob Bever, was killed in the bus crash.

Cecilia Aparicio-Rascon, a bookkeeper at Saint Mary Catholic Church in Athens, Tenn., told a local news station that Bever, 68, was killed. She added that his wife and two daughters were injured in the crash.

Manuel de Jesus Acosta, the guide who was leading the excursion to the ruins, also died in the crash, according to ABC News. Additional details about Acosta are not currently available.

Laura Couallier, 52, and her husband, Christopher Couallier, 55, died in the bus crash. A family member confirmed the deaths to WCVB. Laura, who was originally from Gloucester, Mass., lived with her husband in Florida.