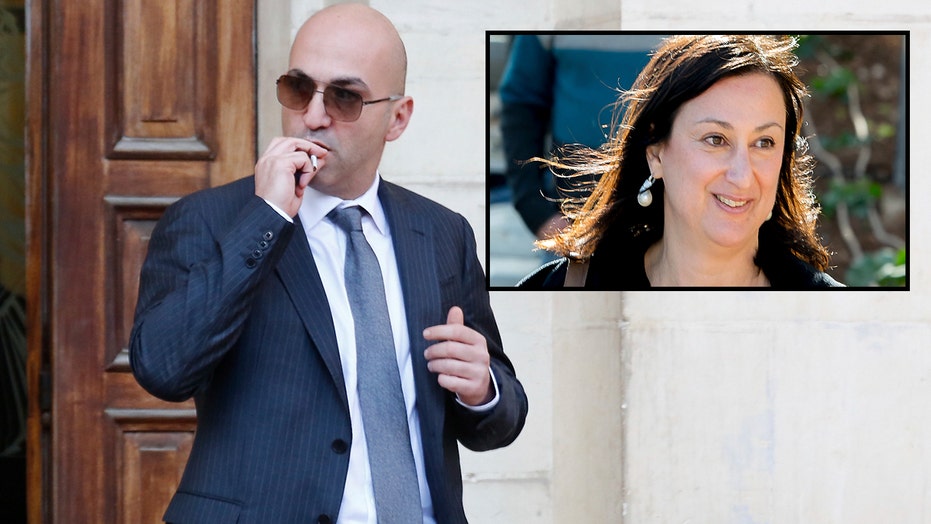 A prominent Maltese businessman has been charged as an accomplice in the 2017 car bomb assassination of anti-corruption reporter Daphne Caruana Galizia.

Yorgen Fenech, a leading hotelier and former director of the Maltese power company, was also charged Saturday with promoting, organizing or financing a group with the intention of committing a crime.

It wasn’t immediately clear whether the “group” referred to the three men being held since December 2017 on charges of carrying out the bombing.

Fenech faced questions from the media after he left court Friday. (AP Photo/str)

Fenech pleaded not guilty in the evening courtroom hearing, just 10 days after police arrested him aboard his yacht as it was sailing away from Malta.

He was detained a day after a man identified as the alleged middleman in the murder plot agreed to give authorities information leading to the individual who ordered the killing in exchange for a presidential pardon.

Caruana Galizia was killed in a car bomb near her home in Bidnija on Oct. 16, 2017. Prior to her death, she had reported to police that she was receiving threats. (AP)

Following Caruana Galizia’s death, her reporting was continued by the Daphne Project. The group reported last year that Malta’s anti-laundering watchdog identified Fenech as the owner of 17 Black, the businessman’s clandestine Dubai-registered company.

Leaked emails showed the company stood to make payments to two Panama companies – one being listed in the name of Prime Minister Joseph Muscat’s chief of staff – for unspecified services.

Keith Schembri resigned as Muscat's chief of staff last week after police detained him for questioning in the murder. Police said there weren’t grounds to hold him and he was later released. He has denied any wrongdoing.

Meanwhile, the embattled Muscat has been facing calls to resign over the alleged links of Schembri to the murder of Caruana Galizia.

While the prime minister’s fellow Labor Party lawmakers have backed him with a pledge of confidence, local media have said Muscat, who has held power since 2013, might stay in office until January, when a party congress must elect a new leader.