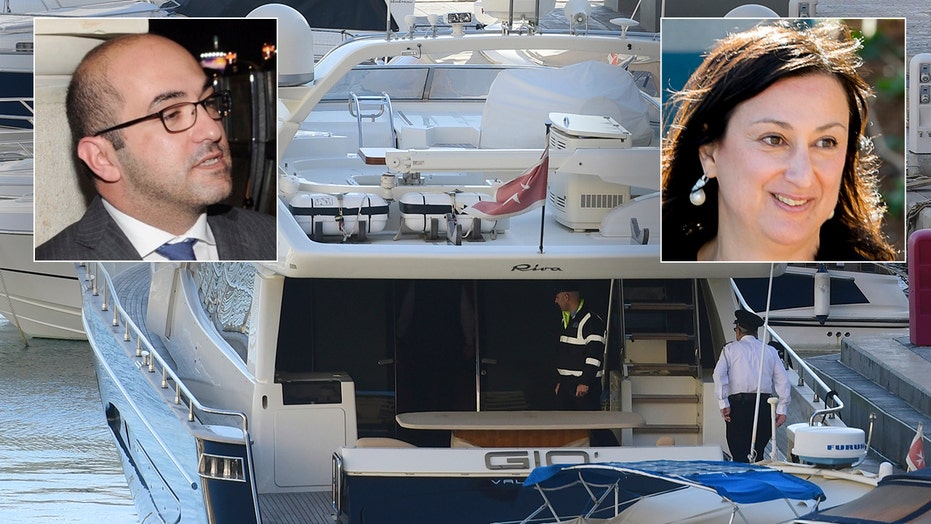 A prominent Maltese businessman was arrested aboard his yacht early Wednesday as a “person of interest” in the car bomb assassination of investigative reporter Daphne Caruana Galizia.

The yacht of Yorgen Fenech, a leading hotelier and director of the Maltese power company, was intercepted on a course out of the country and forced back to port.

Officials have not yet released details on whether Fenech faces any charges, but authorities would have 48 hours to decide on them.

Fenech (inset left) was arrested aboard his yacht as it was sailing away from Malta. He was named a "person of interest" in the assassination of investigative journalist Daphne Caruana Galizia (inset right). (AP Photo/Jonathan Borg) (AP / Reuters)

Speaking to reporters Wednesday, Prime Minister Joseph Muscat didn’t directly link the arrest to the October 2017 killing of Caruana Galizia. He said he didn’t want to prejudice the case.

He told them the arrest appeared to stem from a presidential pardon he offered a day earlier to the suspected middleman in the assassination plot. The unnamed man claimed to know the identity of the mastermind behind the car bombing.

The suspect, arrested last week on money-laundering charges, negotiated a deal that would clear him in the killing and of any past crimes if evidence corroborates his information in court, the Times of Malta reported.

Muscat also said that no politician was tied to Caruana Galizia’s murder.

But following her death, the reporting was picked up by the Daphne Project. It reported in April 2018 that Malta’s anti-money laundering watchdog had identified Fenech as the owner of 17 Black, a Dubai-registered company, according to the Times of Malta.

The Daphne Project followed a paper trail to two Panama companies in the names of two people close to Muscat — his chief of staff and the former energy minister — that stood to receive payments from 17 Black for unspecified services. There is no evidence the payments went ahead.

In addition to Fenech and the suspected middleman, three other men were in custody on suspicion of triggering the blast that killed Caruana Galizia. The three men were arrested in December 2017 and are still awaiting trial.