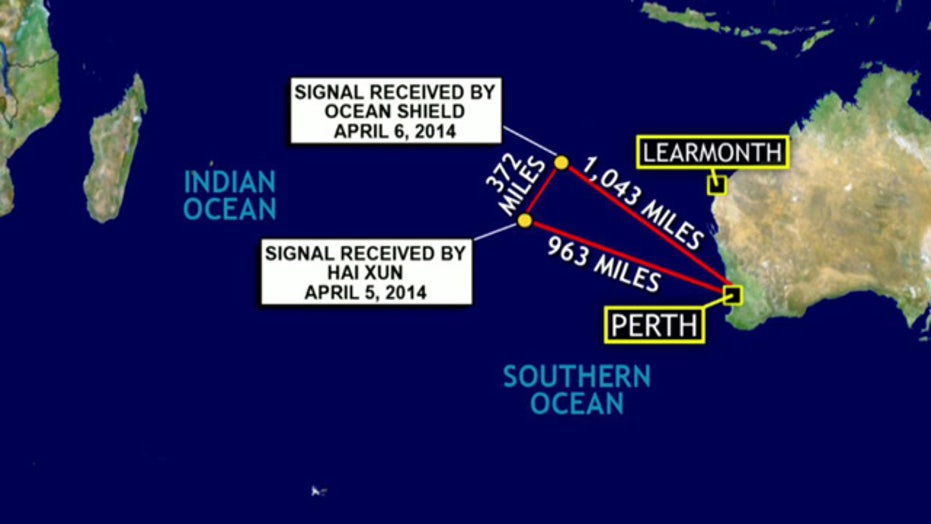 Search for missing jet a race against time

The Malaysian defense minister said Monday that searchers have not ruled out the possibility of survivors among the 239 people missing after a Malaysia Airlines jet mysteriously vanished after taking off from Kuala Lumpur 30 days ago.

There is new hope of finding the plane after Angus Houston, a retired Australian Air Force Chief Marshal coordinating the search mission, said a ship had detected separate pulse signals that were "consistent with transmissions from both the flight data recorder and the cockpit voice recorder," or so-called black boxes.

A multinational operation to find the Boeing 777 after its baffling disappearance continues in the southern Indian Ocean, but after weeks of false leads and millions of dollars in equipment and personnel, the families of those on board the plane may have a reason to believe their loved ones could be alive.

"I have always said to the families: 'miracles do happen,'" Malaysian Defense Minister Hishammuddin Hussein told reporters at a briefing in Kuala Lampur Monday. "We continue to hope and pray for survivors," he added, according to a report in the UK newspaper, The Telegraph.

The new pulse signals suggest search teams are now “very close” to pinpointing the black box’s location. But Hishammuddin cautioned that there are still “many steps to be taken” to check if the signals are linked to Flight MH370.

Malaysian officials said Monday they were "cautiously hopeful" for decisive developments in the search for the plane, hours after the Australian search coordinator Houston reported the new lead on the black boxes in an area of the Indian Ocean nearly 3 miles deep, hundreds of miles off the western coast of Australia.

Houston told reporters in Perth, Australia, Monday that the latest detection of signals was "very encouraging" and "the best information we have.

"We've got a visual indication on a screen and we've also got an audible signal," Houston said, "and the audible signal sounds to me just like an emergency locator beacon."

However, he also stressed that the new findings did not constitute discovery of the plane, which disappeared early on the morning of March 8 en route from Kuala Lumpur to Beijing.

"We have not found the plane," said Houston, who added that it may take days to confirm whether signals picked up by the Australian ship Ocean Shield are indeed from the flight recorders. Houston said the position of the noise needs to be further refined and an underwater autonomous vehicle can be sent in to investigate.

Hishammuddin said searchers are “hoping for a positive development in the next few days, if not hours.”

There is little time left to find the devices, which have beacons that emit "pings" so they can be more easily found. However, the beacons' batteries last only about a month. Tuesday marks exactly one month since the plane disappeared.

"Right now our main focus is on this new lead. This is something that is very positive. I really do hope that we find something concrete out of this," Hishammuddin said.

Chen Zesheng, 63, whose cousin was on the plane, said his family was treating the latest developments with caution.

"We are sort of getting used to this kind of new finding now," he told The Telegraph.

"They have to find the wreckage of the plane otherwise they say this and they say that but none of it has actually been confirmed."

The Ocean Shield had been using a U.S. Navy towed pinger locater when it detected the sounds on two occasions over a period totaling more than two and a half hours in the northern part of the defined search area. The first ping was detected for approximately two hours and 20 minutes, and the second for 13 minutes on the ship's return trip over the same area.

If the Ocean Shield manages to pick up the signal again, the crew will launch a Bluefin-21 autonomous sub that can dive to about 14,800 feet and scan for wreckage.  Given the fact that the sea floor in the area is approximately 14,800 feet deep -- and even deeper in some spots -- the sub will be operating to the limits of its capability, Houston said.

Geoff Dell, discipline leader of accident investigation at Central Queensland University in Australia, said it would be "coincidental in the extreme" for the sounds to have come from anything other than an aircraft's black box.

"If they have a got a legitimate signal, and it's not from one of the other vessels or something, you would have to say they are within a bull's roar," he said. "There's still a chance that it's a spurious signal that's coming from somewhere else and they are chasing a ghost, but it certainly is encouraging that they've found something to suggest they are in the right spot."

The search effort was also continuing on the ocean surface Monday. Twelve planes and 14 ships were searching three designated zones, one of which overlaps with the Ocean Shield's underwater search. All of the previous surface searches have found only fishing equipment or other sea trash floating in the water, but have found no debris related to the Malaysian plane.