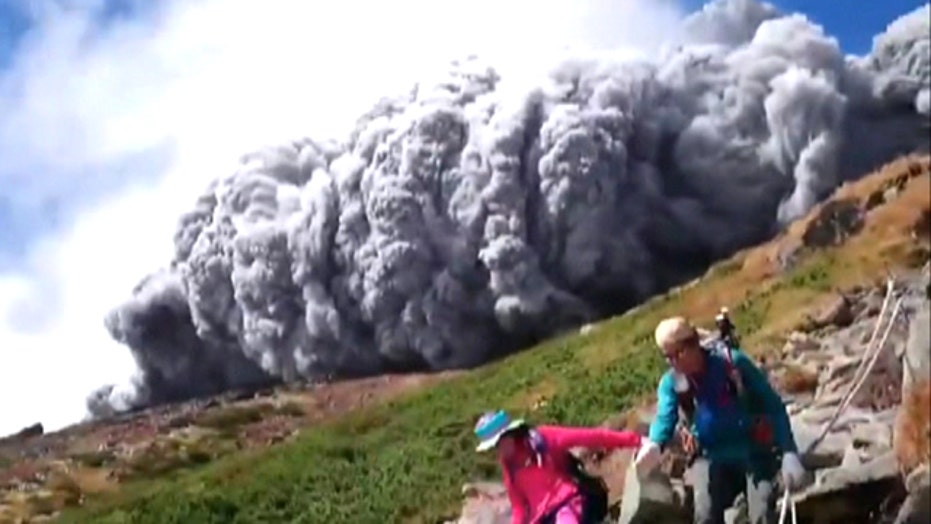 Deadly wall of ash races down Mount Ontake toward hikers

TOKYO – Huge boulders falling from the sky. Billowing gray smoke that cast total darkness over the mountain. Volcanic ash piling on the ground and fumes filling the air.

Some survivors of the eruption of Mount Ontake made a split-second decision to hide behind big rocks or escaped into lodges that dot the mountain's slopes. Outdoors, other hikers fell, hit by rocks or possibly suffocated by gases, and quickly buried in ash. At least 36 people were killed in Saturday's surprise eruption.

For survivors such as mountain guide Sayuri Ogawa, it was a near-death experience. The experience she recalled on Tuesday and the accounts of others suggest that luck and instinct made the difference between life and death for the hikers who were in harm's way.

Despite its impressive plume, the eruption was not a major one with lava flow. Yet, it proved deadly, because so many people were at the summit on a perfect day to enjoy hiking and the autumn leaves.

The eruption caught hikers by surprise. Seismologists had detected signs of increased seismic activity at Mount Ontake, one of Japan's 110 active volcanos, but nothing signaled a fatal eruption.

One moment, the hikers were enjoying the panoramic view at 10,000 feet above sea level. Some of them were taking off their shoes and resting their feet after the morning climb. Others were cooking ramen noodles on portable stoves. The next moment, they were scrambling for shelter and running for their lives.

Ogawa, 43, was near the summit by herself, rehearsing an upcoming tour she was to escort. She was just starting the "bowl tour" around the crater when she heard an explosion, something like the noise of big fireworks, right above her head.

Some people were taking pictures of the plume rising, but she started running down. She saw big rocks shoot up high into the sky, their shape visible. Already down a bit from the summit, there was no building in sight, so she found a big rock to protect her from falling rocks. In the next moment, she smelled the powerful odor of sulfur.

"I couldn't breathe, and rocks kept falling down like rain," she said. "I thought I was going to die."

What must have been a few minutes seemed like forever. Then she felt a cool breeze in her face and could breathe. She moved to a place with better protection, ducking between two big rock formations where only part of her right leg was exposed. Smoke repeatedly blacked out any sights, and falling rocks smashed against the formation where she was hiding, some of them bruising her leg and hip. In the dark, rocks as big as a minivan, or a refrigerator, flew past her. The ash had accumulated to knee-high by the time she stood and ran to a lodge, to inform authorities of a woman with a leg injury she saw along the way.

Dozens of people were crammed inside the buildings as the rocks pelted, some penetrating the ceilings and walls and shattering the windows.

Ontake Summit lodge owner Tatsuo Arai, 70, knew the right escape. He was in town for shopping when the eruption occurred but remotely instructed two of his younger staff.

About 40 people took refuge at Arai's lodge for about an hour and a half, all of them staying on the first floor of the two-story building. He told them not to go near the windows because of the flying rocks.

Speaking briefly to save phone batteries, he gave crucial advice that probably saved dozens of lives: Avoid the area known as "Haccho darumi" near one of the craters, because he was worried about gasses. More than a dozen victims were found in the area. "It was my experience and gut feeling," he said.

A sixth sense seemed to help Hidenari Hayashi, a tour guide specializing in the central Japan mountains. His group of about 40 hikers who are mostly senior citizens, started early and by midmorning they had left the summit. But walking around the crater, he noticed an unusually strong smell of sulfur that he hasn't noticed in previous visits. Some of the hikers in his group complained about headaches from the gas. Just as a cable car carrying his group departed the station closest to the summit, an explosion sounded, which Hayashi thought was thunder at first.

"If we were two hours later, we were the first ones to have been hit," Hayashi said. "I'm grateful I'm still alive."

Ogawa was shocked when she returned to her home in the Nagao prefecture and saw footage of the eruption on TV.

"It was intense, it was almost surreal," she said. "I have to remind myself that anything can happen at the mountains."