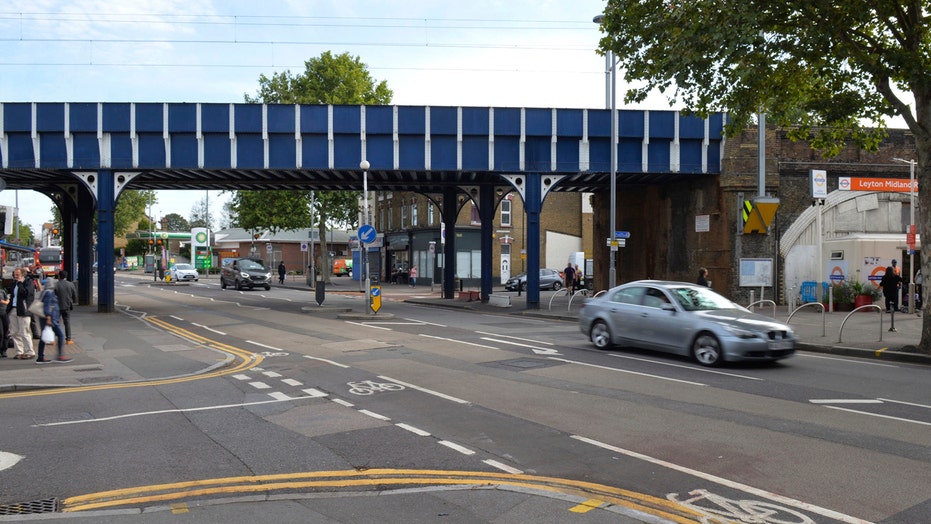 A London police officer conducting a routine traffic stop was seriously injured Thursday morning after he was stabbed several times, including in the head, by a man wielding a machete, officials said.

Officers in a marked police car attempted to stop a van for not having insurance just after midnight Thursday in Leyton, east London,

When the driver refused to stop, officers then engaged in a brief pursuit, according to the Metropolitan Police.

Leyton Detective Chief Superintendent Richard Tucker told reporters that police approached the driver, who he described as an aggressive male in his 50s, before the suspect attempted to flee.

The street scene in the Leyton area of east London, where a police officer was stabbed with a machete around midnight while stopping a van, Thursday Aug. 8, 2019.  (PA via AP)

“He tries to make off, gets back in the van and a violent struggle ensues where he produces a weapon and stabs our officer in the head and around the body,” Tucker said.

The officer, who is said to be in his 30s, managed to free his taser and subdue the man who was then taken into custody.

The driver was arrested on suspicion of grievous bodily harm and taken to an east London police station for questioning. He did not require any medical attention following the incident.

The officer injured in Thursday’s attack was taken to the Royal London Hospital where Tucker said he is expected to survive.

“He is fine. He is seriously injured but he will make a recovery. So he’s there with his family and his loved ones.”

Tucker thanked members of the public that were caught on bodycam footage coming to the help of the injured officer. He also commended the brave officer who managed to stop the suspect from harming more people, despite his serious injuries.

Sadiq Khan is a 'ridiculous character,' and is seen as a failure as London mayor: Steve Hilton

“I think this incident here just highlights what an amazing job the police of London do every single day… and it’s these officers, our officers, who serve London everyday, who are going out there confronting some of the most violent people in society to make London safer.”

Mayor of London Sadiq Khan said he was "utterly appalled by this sickening attack on a serving Met Police officer".

The United Kingdom is facing an epidemic of knife crime. Data released by the Office for National Statistics (ONS) last month showed that there were 43,516 police-recorded offenses involving a knife or sharp instrument in 2018-19, the highest figure since such records began in 2011 and an 8 percent increase from the previous year.

As of last month, there were at least 33 fatal stabbings in London, while last year, knife crime took the lives of 135 people. The capital also saw 3,301 knife crime offenses in 2017/18.

Mayor Khan, who has been criticized for the spike in knife crime happening on his watch, insists the problem is caused by a “direct link” between poverty and violent crime.

“The sad reality is the violence we're seeing on our streets today is an appalling side effect of increasing inequality and alienation caused by years of austerity and neglect.”

“It is tragic that so many young lives are again being lost on the pavements of our capital,” Johnson wrote in a Telegraph column last year. “But for my money there is a further outrage - and that is the abject failure of the mayor of London either to grip the problem, or even to take responsibility.”

He added: “[Sadiq Khan] blames everyone but himself, when it is his paramount duty to keep Londoners safe.”