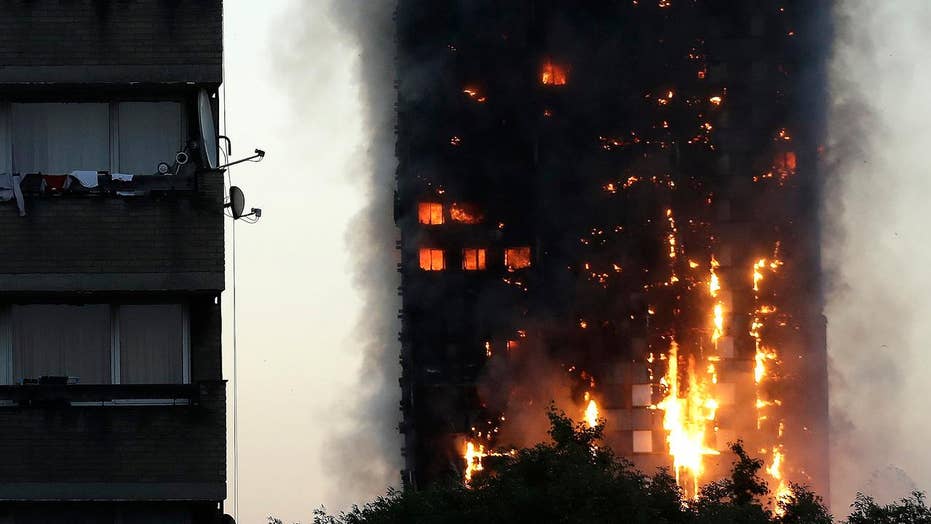 At least 6 dead in massive blaze

The death toll of a deadly overnight fire that engulfed a 24-story London apartment tower Wednesday has risen to 12, local police said. That number is expected to continue to rise.

He said crews have rescued 65 people from the building, and that firefighters have searched most of the tower and reached the top floor.

Officials declined to  say how many people were missing.

The inferno lit up the night sky and spewed black smoke from the windows of the Grenfell Tower in North Kensington. A plume of smoke stretched for miles across the sky after dawn, revealing the blackened, flame-licked wreckage of the building, which was still burning over 12 hours later.

Between 400 and 600 people are said to live in the building, which houses 120 apartments and was still burning some 14 hours after the blaze broke out in the early hours of Wednesday.

More than 200 firefighters battled the inferno, which officials called an “unprecedented incident.”

Witnesses reported seeing residents throwing babies and small children from high windows to people on the sidewalk in a desperate effort to save them from the flames.

One witness, who identified herself as Sofia, told The Guardian: “I heard loads of young girls crying out for help…I can hear people screaming for help and they are dying.”

Jody Martin told the BBC she watched desperate residents of the building trying to escape the blaze.

"I watched one person falling out, I watched another woman holding her baby out the window," she said. "I was yelling at everyone to get down and they were saying, 'We can't leave our apartments, the smoke is too bad on the corridors.'"

Smoke and flames billow from a fire in London. (AP)

Fire Commissioner Dany Cotton told reporters: “In my 29 years of being a firefighter I have never, ever seen anything of this scale.”

Paul Munakr, who lives on the seventh floor, managed to escape. He said he was alerted to the fire by people screaming "don't jump, don't jump."

"The Prime Minister is deeply saddened by the tragic loss of life in the Grenfell Tower and is being kept constantly updated on the situation," a spokesperson for PM Theresa May said.

There was no immediate word on the cause of the blaze, but angry residents said they had warned local authorities about fire issues at Grenfell Tower. The subsidized housing block of 120 apartments was built in 1974 and was recently upgraded at a cost of 8.6 million pounds ($11 million), with work finishing in May 2016, according to the Royal Borough of Kensington and Chelsea.

Police commander Stuart Cundy gave the death toll of six but added the figure was likely to rise "during what will be a complex recovery operation over a number of days."

Paul Woodrow, head of operations for the London Ambulance Service, said 20 of the injured were in critical condition.

The London Fire Brigade received the first reports of the fire at 12:54 a.m. and the first engines arrived within six minutes, Cotton said.

A spokesman at the organization that manages apartment block declined to comment on prior complaints about fire safety at the building.

Pete Griffiths, a spokesman for the Kensington and Chelsea Tenant Management Organization, told The Associated Press: "I can't comment. We're getting hundreds of requests for comments."

The Grenfell Action Group, a community organization formed to oppose a nearby redevelopment project, has been warning about the risk of fire at Grenfell Tower since 2013. The group has raised concerns about testing and maintenance of firefighting equipment and blocked emergency access to the site.

"All our warnings fell on deaf ears and we predicted that a catastrophe like this was inevitable and just a matter of time," the group said after the fire broke out.