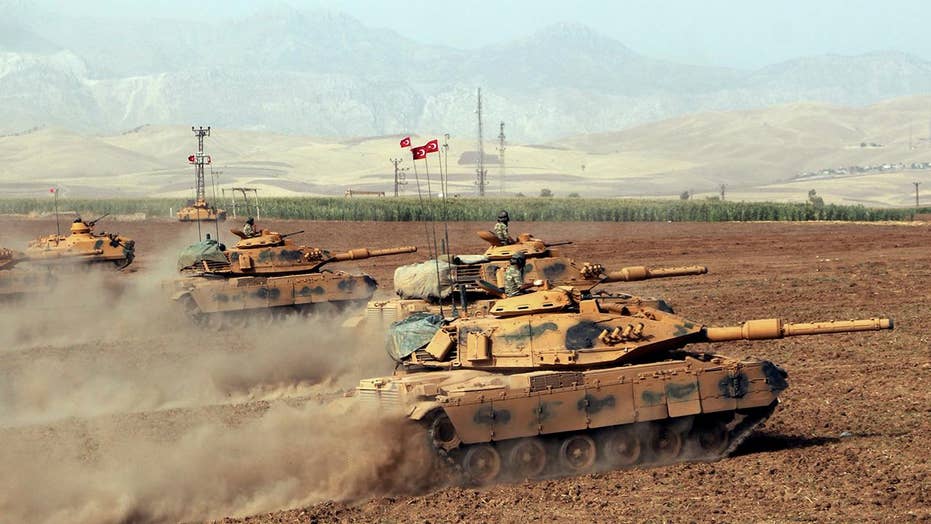 Kurds in Iraq voted overwhelmingly last week in favor of seeking full independence from the central government in Baghdad — setting off a firestorm of international retaliation, including strong objections from the U.S. But the Kurdish quest for their own country has also prodded other minorities in the region — namely the long persecuted Christian community — to vocalize their fears and frustrations about being caught in the middle, and their own ambition for some form of a “safe haven” or autonomy.

“Christians understand the sentiment of self-determination and liberty that drives every man or woman,” Mark Arabo, President of the Minority Humanitarian Foundation, told Fox News. “One thing that gives Christians hope is that if Kurdistan is successful in their effort to attain sovereignty, perhaps Christians can successfully carve out a space in the Nineveh Plains that would grant them far greater protection than is currently had.”

There are an estimated 200,000 Christians left in Iraq, down from over 1.5 million prior to the 2003 Iraq invasion, the majority of whom were forced to flee Mosul and other parts of the Nineveh Plains to the Kurdish-held north in 2014 as ISIS assaulted in on their land.

An Iraqi child works on a temporary mosaic of Pope Francis' face made from wheat, beans and lentils in Alqosh, a village of some 6,000 inhabitants about 31 miles north of Mosul, northern Iraq. (AP)

Deemed the ancestral homeland of all Christianity — many of these Christian areas in the Nineveh now lie in the disputed areas between the Kurdish Regional Government (KRG) based in Erbil, and the central government further south in Baghdad.

As a dwindling minority, many Christians view themselves as caught between the crossfire and no longer want to be reliant on either government for security and protection, thus the push to declare their own referendum is only gaining traction. Last month, officials in the few remaining Baghdad churches even called for help in establishing an independent state — similar to that of the Vatican.

Juliana Taimoorazy, founder of the Iraqi Christian Relief Council, stressed that in the wake of the genocide committed against them by ISIS, the only people they can trust are their own.

“When ISIS attacked the Nineveh Plain, the Kurdish Peshmerga and the Iraqi forces escaped instead of defending the towns they were assigned to protect, leaving the Christians and Yazidis vulnerable,” she claimed. “What will keep the indigenous people of the land safe and thriving is to have the right to defend and protect themselves. The only way we will thrive as a society and ensure safety is by protecting ourselves.”

The increasing tensions between the two governments and threat of military escalation has some Christians on edge that further fighting will only dwindle their numbers further.

“From the beginning, we in the Nineveh Plains asked to be kept away from the referendum because it will create tensions,” said Kaldo Oghanna, director of central media of the Assyrian Democratic Movement, which contends that the referendum does not represent the minorities. “Any problems will cause even more Christians to leave the country.”

And the well-known Vicar of Baghdad, Canon Andrew White, acknowledged that the future for Christians in the wake of the autonomy push is now more uncertain than ever.

“The results of this election have caused huge tensions between Kurdistan and Iraq,” he told Fox News, noting that both Iraq and Kurdistan have become foreign places for Christian communities. “There are a few Kurdish Christians, but not many. They do not see that they have any links with the Kurds there, however there are historic monasteries in places like Dohuk. But most Christians will not go back to Nineveh under any circumstances. Most of them have already fled, or are waiting to leave.”

AFTER VOTE, DEFIANT IRAQI KURDS SAY THEY ARE READY TO FIGHT FOR INDEPENDENCE

While the referendum was nonbinding, its purpose was to use as evidence that the Kurds – at least 92 percent of the six million in Iraq and in the diaspora worldwide – wanted their own mothership, and to use that card to ignite that process. However, any additional moves for independence are likely to roil the region even further.

Iraq’s Parliament requested that the country’s prime minister deploy troops to the borders of the disputed areas held by Kurdish forces after Iraqi troops abandoned the post when ISIS invaded, provoking concerns of an armed conflict. On Tuesday, joint drills were indeed undertaken by Iran and Iraq forces.

Furthermore, Baghdad has called the vote illegal and halted flights into the main Kurdish airports as well as insisting the region surrender oil revenues.

One Baghdad official told Fox News that they have received “various reports” of Kurdish officials and Peshmerga members “forcing Christians, Muslim Arabs and Yezidis to vote in favor of independence,” of which Taimoorazy concurred.

“Many individuals felt pressured that if they were not to vote for a Kurdish state, they would lose their jobs and livelihood,” she claimed.

A member from the Oil Police Force is seen at Nahran Umran field norh of Basra, Iraq September 8, 2017. (REUTERS/Essam Al-Sudani)

However, KRG officials have vehemently dismissed such allegations and point out that the semiautonomous region has worked above and beyond to support and safeguard minorities and allow them religious freedom, especially since the majority of them are still being housed as displaced people at a great cost to the Kurdish community.

According to Kelsey Zorzi, New York-based U.N. Counsel for ADF International, whether or not Iraqi Christians — who are generally split between Syriac, Chaldean, Assyrian and Armenian sects — support the independence move simply comes down to which Christian you ask.

“Above all, they are all interested in peace and stability. They want to enjoy their right to religious freedom which the Kurdish government as well as the leadership in Baghdad are willing to grant,” she said. “But given that the Peshmerga were the fiercest opponents of ISIS, Christians living in an independent Kurdistan would not have to fear genocide perpetuated by ISIS.”

Peshmerga forces in the fight against ISIS

Yet Philippe Nassif, Executive Director of the nonprofit human rights group In Defense of Christians (IDC) told Fox News that of the 11 different Christian political parties in Iraq, most of them seem to be divided on the issue of Kurdish independence, but almost all “seek stability and want some form of autonomy over their own affairs.”

“What is important is that Christians are allowed to protect themselves and be given protection by whoever ends up governing these areas,” he added. “It is also important that they are allowed to rebuild their destroyed communities and economy unimpeded.”