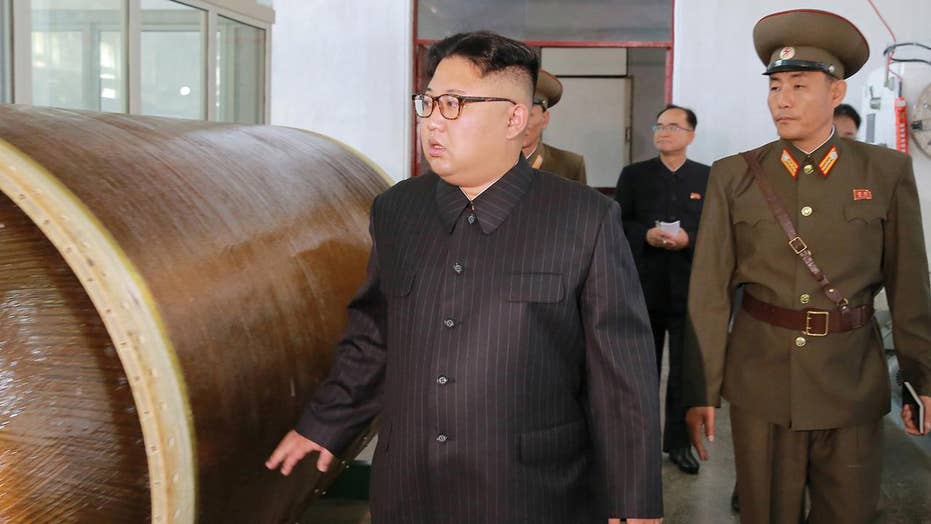 Kim Jong Un, placing his foot firmly back on the gas in his war of wills with the United States, reportedly ordered more rocket engines and warhead tips for the rogue regime's ramped-up intercontinental ballistic missile program.

KCNA also unveiled photos showing disturbing diagrams hanging on the wall behind the despot during Kim Jong Un's visit to the plant that makes the solid-fuel engines for the country's ballistic missiles.

One showed a missile called Pukguksong-3, which appears to be the latest in the Pukguksong, or Polaris, series. The other was more difficult to discern but appeared to be in the "Hwasong," or Mars, series.

North Korea looks to follow-up on the two successful ICBM launches it carried out in July -- the second being the longest such test in the history of the the regime. Officials believe North Korea launched a KN-20 ICBM both times, the launches coming about two weeks apart from one another.

But Kim still lacks the materials to obtain atmospheric re-entry technology, allowing the missiles to withstand the heat and pressure of re-entry while passing through Earth's atmosphere, Yonhap News Agency reported. The technology is a key part of developing successful ICBM -- and one of the last hurdles North Korea faces.

North Korea also issued a series of threats earlier this week as U.S. and South Korea troops kicked off an annual 11-day military training drill, with the regime vowing "merciless retaliation and unsparing punishment" in response to the "reckless move." The U.S. and South Korea kicked off the drills on Monday despite the rogue nation's calls to pause or downsize them.