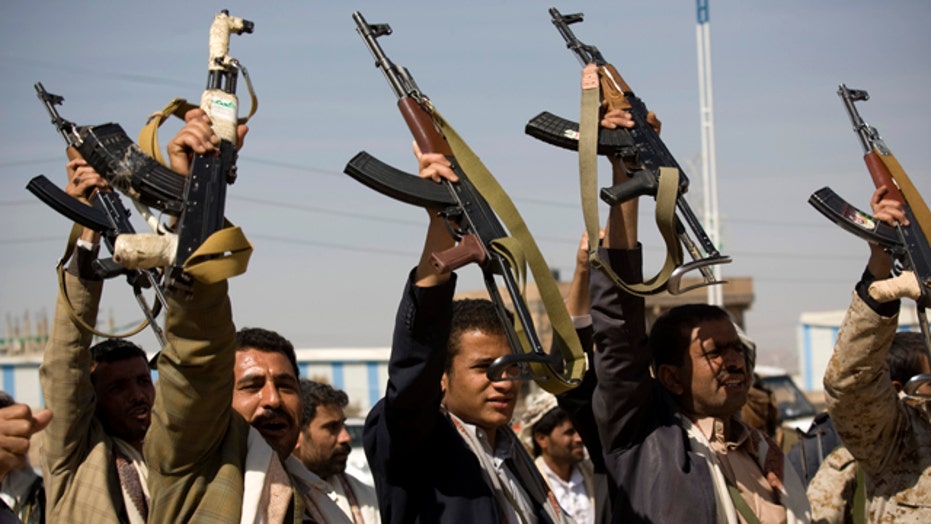 An American citizen detained by Shiite Houthi rebels in Yemen for more than a year and a half has been released, U.S. Secretary of State John Kerry said Sunday.

In a statement, Kerry welcomed reports of the release of Wallead Yusuf Pitts Luqman, recognizing it as a "positive gesture by the Houthis."

UNITED NATIONS AGENCY: YEMEN WAR HAS TAKEN OUT HALF OF HEALTH FACILITIES

Last month, in a Facebook posting, Luqman's wife Jihan Mohamed appealed for her husband's release, saying he was being "held unjustly" without charges by the Houthis' political security organization in the capital Sanaa. She said her husband had been in Yemen teaching English and was detained in April 2015 while trying to leave the country by bus.

Kerry expressed his appreciation to Oman's Sultan Qaboos bin Said Al Said and his government for their help in securing Luqman's "safe return."

The Houthis had earlier released several other Americans who were detained after the Shiite rebels took control of Sanaa.

Yemen, on the southern edge of the Arabian Peninsula, has been in the midst of a civil war since September 2014 when the Houthi rebels swept into Sanaa and overthrew the government of President Abed-Rabbo Mansour Hadi. In March 2015, a Saudi-led coalition of Arab countries began a military campaign against Houthi forces.

The Saudi-led campaign initially had the logistical and intelligence support of the U.S., but mounting civilian casualties from its airstrikes led to America pulling back.

A human rights group in Yemen said in a report Sunday that violations by the warring parties in the southern city of Taiz, Yemen's third largest city, have killed or wounded hundreds of civilians.

The Houthis have besieged Taiz since March. Taiz residents say more than 1,600 civilians have been killed.

Radhya al-Mutawakel, the head of the Mwatana Organization for Human Rights, said the violations in Taiz "amount to war crimes."