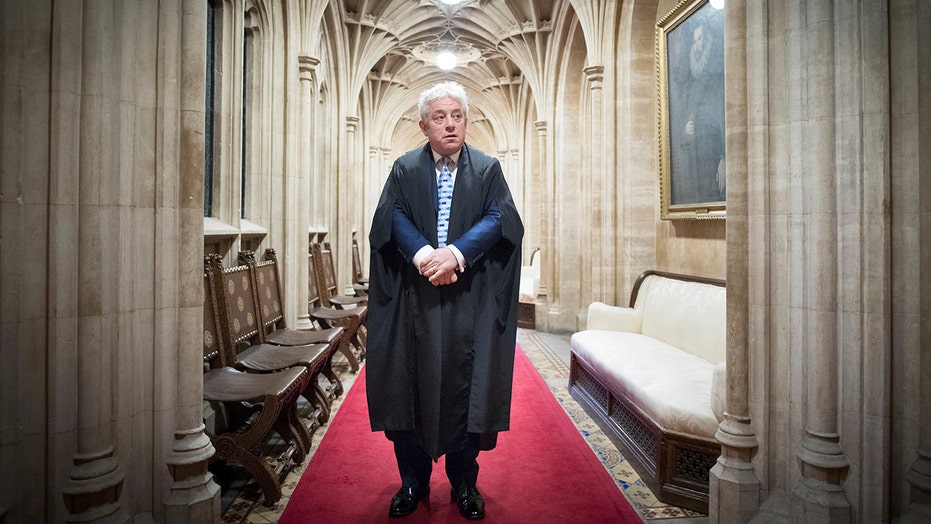 It's unclear whether the British government has either the votes or the time to meet the approaching Brexit deadline; Benjamin Hall reports from London.

John Bercow, the combative speaker of Britain’s House of Commons who became a global celebrity --thanks in part to his theatrics and long-winded barks of “Order, Or-derrr!" --has stepped down after a decade on the job.

The 56-year-old became speaker in 2009 amid turmoil plaguing parliament. With his loud ties, even louder voice – and most recently his divisive actions during the Brexit drama – he went on to become the longest-serving speaker since Edward Fitzroy, who served for 15 years between 1928 and 1943.

March 12, 2019: Speaker of the House of Commons John Bercow going through his daily routine of preparing to preside over the day's events in the chamber. On Thursday Oct. 31, 2019, he is stepping down after 10 years in the job.  (PA via AP)

“You have sat up there in your high chair, not just as an umpire, ruthlessly adjudicating on the finer points of parliamentary procedure with your trademark ‘Tony Montana’ scowl, Mr. Speaker,” Prime Minister Boris Johnson said Wednesday during Bercow’s final parliamentary appearance as speaker. “There is no doubt in my mind that you have been a great servant of this parliament and of this House of Commons.”

Bercow announced his plans to step down as speaker in September, saying he would retire by next election or Oct. 31, whichever came first. A general election is scheduled for Dec. 12.

In his decade in the speaker’s chair, Bercow became the backbenchers’ champion, clashed with prime ministers, survived attempts to oust him, spoken out against U.S. President Donald Trump and played a key role in the ongoing drama regarding the U.K.’s divorce from the European Union.

“You have modernized, you have widened access, you have cared for the needs of those with disabilities, and you have cared so deeply for the rights of backbenchers that you’ve done more than anyone since Stephen Hawking, to stretch time in this particular session,” Johnson said, leading the tributes Wednesday.

A colorful era in British parliamentary history is coming to a close with Speaker of the House John Bercow's abrupt announcement Monday that he will leave his influential post by the end of October.  (House of Commons via AP)

With his innovative interpretation of the role, Bercow has become a hero to Brexit opponents, a villain to its advocates and a thorn in the side of Britain's Conservative government.

Bercow biographer Sebastian Whale says "he is a speaker for the times. He's divisive, abrasive and controversial."

Jeremy Corbyn, leader of the opposition Labour Party, praised Bercow for standing up for Parliament “when it has to be stood up for.”

“I think we thank you for that because you’ve also carried that message internationally as well, in the role of parliamentary democracy and parliaments holding governments to account,” he said. “You’ve taken it (parliament) away from being a gentleman’s club that happens to be in a royal palace to a genuinely democratic institution.”

A tearful Bercow thanked lawmakers for the tributes and praised his family for their “support, stoicism and fortitude.”

Bercow’s replacement will be elected by lawmakers on Monday from among the 650 members of Parliament. There are nine candidates, including Bercow’s three deputy speakers.