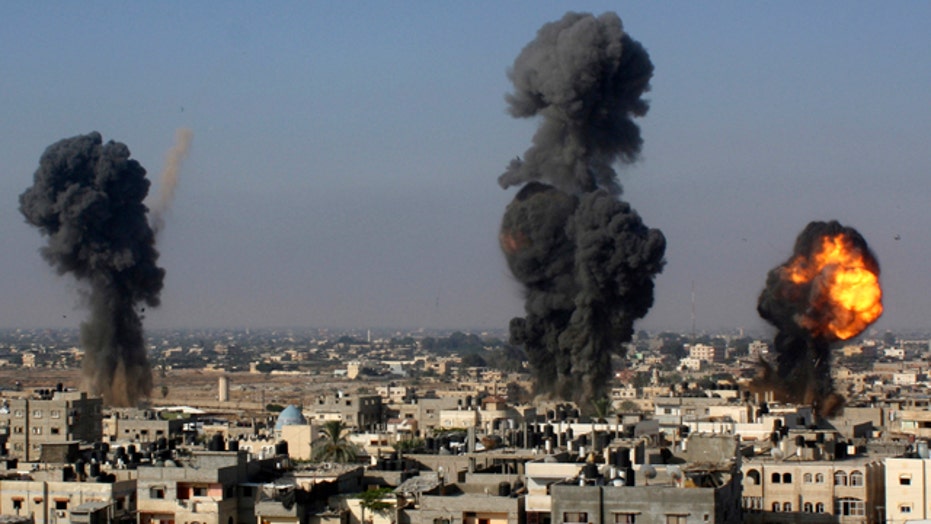 Israel’s military said Wednesday that it had struck around 200 sites linked to the Islamic militant group Hamas on the second day of an offensive aimed at stopping rocket attacks directed at key cities across Israel.

The army said sites that it attacked in Gaza Wednesday included 118 concealed rocket-launching sites, six Hamas compounds, 10 militant command centers, weapons storage facilities and 10 tunnels used for militant activity and to ferry supplies in from Egypt. The border between Gaza and Egypt has effectively been closed for months.

Militants, however, continued to fire rocket salvos deep into Israeli territory, and Israel mobilized thousands of forces along the Gaza border ahead of a possible ground operation.

Since the offensive began Tuesday, Israel has attacked more than 560 sites in Gaza, killing at least 41 people, according to The Associated Press. The strikes came after militants fired more than 160 rockets at Israel, including one that reached the northern Israeli city of Hadera for the first time. The city is about 60 miles from Gaza.

The Hadera explosion caused no injuries, the Israeli Army said, but it did mark the farthest distance a rocket has traveled from Gaza. With its new reach, Hamas' rockets now have an estimated 5 million people — more than half of Israel's population — in range.

"The army is ready for all possibilities," Prime Minister Benjamin Netanyahu said after holding a meeting of his Security Cabinet. "Hamas will pay a heavy price for firing toward Israeli citizens. The security of Israel's citizens comes first. The operation will expand and continue until the fire toward our towns stops and quiet returns."

Israeli leaders warned a ground invasion could be imminent.

"Despite the fact it will be hard, complicated and costly, we will have to take over Gaza temporarily, for a few weeks, to cut off the strengthening of this terror army," Yuval Steinitz, Israel's intelligence minister, told Israel Radio. "If you ask my humble opinion, a significant operation like this is approaching."

By early Wednesday, air raid sirens sounded in Tel Aviv and Israel's south, and the army said two rockets were apparently intercepted above the central Israeli city by an anti-missile battery. In total, at least seven rockets were fired toward Israel on Wednesday, and the "Iron Dome" anti-missile system intercepted about half of them mid-air, the army said. There were no reported injuries.

The BBC reported that rockets fired from Gaza reached Jerusalem on Tuesday, but fell without causing injury.

Gaza health official Ashraf al-Qidra said at least 14 people were killed in Wednesday's airstrikes, including two militants. An 80-year-old woman was among the dead. In all, 35 Palestinians have been killed.

Israel's army said its targets included a senior member of the Islamic Jihad militant group. Islamic Jihad confirmed one of its members was killed, along with his mother and four siblings.

Israeli Army spokesman Lt. Col. Peter Lerner told reporters that the military's aim was to take a "substantial toll" on Hamas and to deplete its rocket capabilities. He said the army would gradually ramp up its strikes on Gaza.

"The organization is going to pay for its aggression. It is literally holding us hostage with its rockets," Lerner said. "The country is not willing for this situation to continue."

"I have ordered the military to significantly broaden its operation against Hamas terrorists and against the other terrorist groups inside Gaza," Netanyahu said in a televised address. "I call on you to display patience because this operation could take time."

Netanyahu's government has authorized the Israeli Army to activate up to 40,000 reservists for a possible ground attack against Gaza. The army said that about 1,000 soldiers were immediately activated, in addition to an earlier group of 1,500 reservists called into action.

"If we need to go inside in a ground operation, then we will do it. These things are on the table. These options exist. We will not stop anything until the rocket firing ends," said Yitzhak Aharonovitch, the minister for internal security and a member of Netanyahu's inner Security Cabinet. Israel's last ground offensive was in 2009.

Israel and Hamas agreed to an Egyptian-brokered cease-fire that ended the last round of fighting in late 2012.

But in Gaza, Abu Obeida, a masked spokesman for Hamas' military wing, accused Israel of violating that agreement and demanded a halt to the airstrikes, its recent crackdown in the West Bank and its opposition to a Palestinian unity government that is backed by Hamas.

"In the face of this aggression, we affirm that the Zionist enemy should not dream of calm and stability," he said.

Hamas is far weaker than in 2012. At the time, Egypt was governed by the Muslim Brotherhood, Hamas' close ally. Following a military coup in 2013, Egypt's new government is hostile to Hamas and has closed a network of smuggling tunnels used by the group as an economic lifeline.

Hamas seized control of Gaza in 2007 from the rival forces of Palestinian President Mahmoud Abbas. But facing international isolation and an economic crisis, Hamas last month agreed to back a new unity government with Abbas.

Abbas called on the international community and the United Nations to "provide international protection for our people." He said in a televised statement late Tuesday that Hamas leaders in Gaza want to restore calm.

"I have been in contact with the regional and international parties in the last few days, particularly Hamas leaders in Gaza, and everyone I've talked to expressed his willingness to restore the truce and stop the escalation," Abbas said. He called the Israeli offensive on Gaza an "orchestrated and brutal aggression."

Tensions have been rising since the kidnapping on June 12 in the West Bank of three Israeli teenagers, who were found murdered. Israel accused Hamas of being behind the abductions, although it provided no proof.

Israel then launched a crackdown on the group's members in the West Bank and arrested hundreds of people. Hamas, which controls Gaza, responded by stepping up rocket fire.

Hours after the teens’ funeral, Mohammed Abu Khdeir, a 16-year-old Palestinian teenager, was abducted and later found dead in a Jerusalem forest in what Palestinians say was a revenge killing.