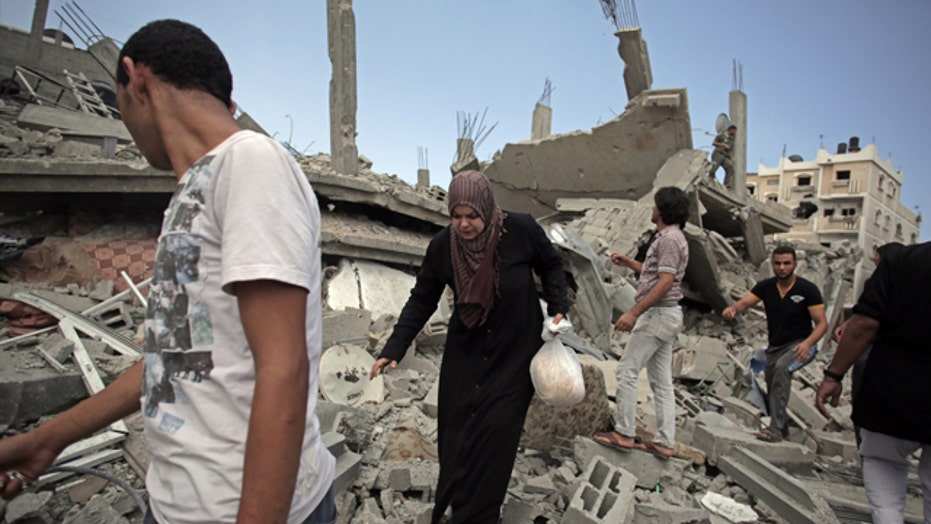 Netanyahu spokesman Mark Regev on next stage of conflict

Israel is in the "end stages" of ground operations to locate and destroy Hamas tunnels, a spokesman for Prime Minister Benjamin Netanyahu told Fox News Monday.

"We believe we've got most of the tunnels," Mark Regev told "America's Newsroom" co-host Bill Hemmer. "Once that's complete, we can start re-deploying our forces back in defensive positions."

Israel has been drawing down its ground operation over the past few days, but has kept up heavy aerial, offshore and artillery bombardments of the strip, carrying out more than 4,600 airstrikes across the crowded seaside territory since launching its military operation on July 8.

Hamas has fired more than 3,200 rockets into Israel, many of them intercepted by Israel's Iron Dome defense system. Regev estimated that Hamas' supply peaked at close to 9,000 rockets with less than one-third now remaining.

"We've got to -- the United States, Israel, other allies in the region and beyond -- we've got to make sure that Hamas cannot replenish its arsenals," Regev said, noting that Iran and Qatar will likely provide more missiles and money.

"Hamas is like an alcoholic with a bottle of alcohol. They can't say no. If they have those missiles, they'll fire them."

The conflict, now in its fourth week, has left more than 1,800 Palestinians and 60 Israelis dead. However, it is unclear how many of the Palestinian dead are civilians.

Israel's faith in Hamas leadership to produce a lasting cease-fire is at "rock bottom" after last week's 72-hour agreement broke down in 90 minutes, according to Regev.

"We didn't want this conflict in the first place," he said. "We only did it to protect our people."