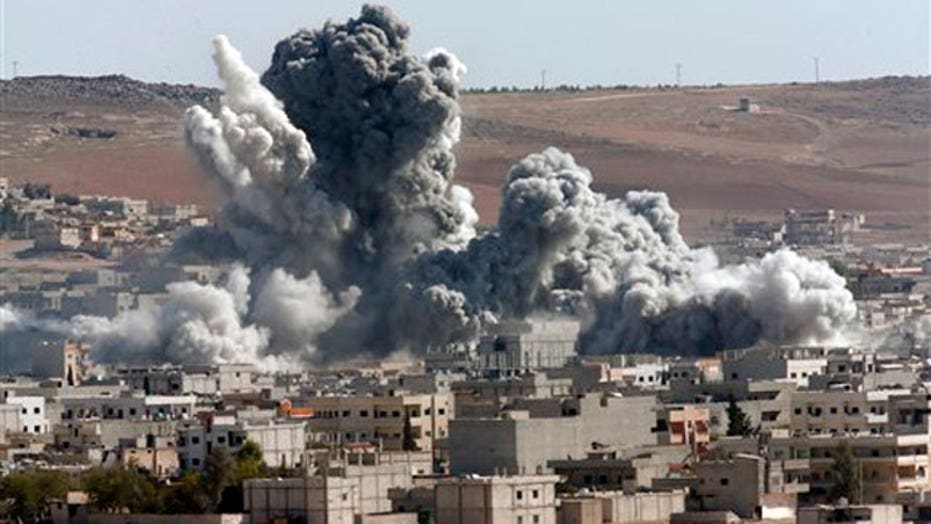 Dozens of Iraq's Kurdish peshmerga fighters are flying to Turkey on Tuesday and will head across the border to fight the Islamic State for control of Kobani, in a battle in which a British hostage purportedly says “is nearly over.”

A man who identifies himself as John Cantlie, who was captured by ISIS in 2012, says in a new video -- purportedly shot in Kobani -- that militants in the contested Syrian border city are “mopping up now,” according to the BBC.

"Now the battle for Kobani is coming to an end,” the man in the video says, shown walking outside as if he was a war reporter. “The mujahideen are just mopping up now, street to street, and building to building.”

The video lasts nearly six minutes and contains footage claimed to be shot by an Islamic State drone. Sources in the Kurdish People's Protection Unit confirmed to the BBC that ISIS has drones and said the video appeared to be shot inside Kobani.

"Contrary to what the Western media would have you believe, it is not an all-out battle here now,” the man says. “It is nearly over. As you can hear, it is very quiet, just the occasional gunfire."

A British Foreign Office spokesman on Monday said the government is “aware of a further video and we are analyzing its contents.”

The Islamic State launched its offensive on Kobani and nearby villages in mid-September in battles that have killed more than 800 people, according to activists who spoke to The Associated Press.

The extremists captured dozens of Kurdish villages around Kobani and now also control parts of the town. The battles also made more than 200,000 people flee for safety across the border into Turkey.

An AP reporter on the Turkish side of the border facing Kobani said there were three airstrikes by the U.S.-led coalition on Tuesday. Occasional shooting could be heard from the town.

The Britain-based Syrian Observatory for Human Rights said that the U.S.-led coalition carried out three airstrikes on Kobani in Tuesday, adding that they targeted a gathering of Islamic State fighters.

U.S. and allied aircraft also conducted airstrikes in Iraq – near the Mosul Dam, Fallujah, Sinjar and Haditha, according to Reuters.

A spokesman for the Kurdish force said Tuesday that dozens of Iraq's Kurdish peshmerga fighters will help fellow Kurds fight militants in Kobani.

According to the spokesman, Halgurd Hekmat, the peshmerga fighters will leave the city of Irbil, in Iraq's semi-autonomous Kurdish region, later in the day. He gave no further details.

Last week, the local Iraqi Kurdish government authorized the peshmerga forces to go to neighboring Syria and help fellow Kurds combat Islamic State militants in Kobani. A total of 150 peshmerga fighters were authorized to go to Kobani through Turkey.

Lt. Gen. Frederick Hodges, the outgoing commander of NATO's Land Command in Izmir, Turkey, said last week that the Turks have agreed to open up "a land bridge of sorts" so that the peshmerga can get into Kobani to help with the fighting there.

The Turkish government has been reluctant to aid the Syrian Kurdish forces — the People's Protection Units, or YPG — because it views them as an extension of the Kurdistan Workers' Party, or PKK, which has waged a 30-year insurgency in Turkey and is designated a terrorist group by the U.S. and NATO. The stance has riled Kurdish leaders and frustrated Washington.

On Tuesday afternoon, a large peshmerga convoy with heavy weapons was seen in Irbil, driving towards the Iraqi Kurdish area of Dohuk.

The convoy was moving by land and it was not immediately clear if the fighters had left or would leave on a plane and the convoy would drive to Turkey.

Idriss Nassan, a Kurdish official from Kobani, told The Associated Press that they have no confirmation that peshmerga fighters were to arrive Tuesday. "We have no information other than what we are reading on social media or hearing on the news," Nassan said by telephone from Turkey.

He added that the peshmeraga command might have direct contact with the Syrian Kurdish force known as the Peoples' Protection Units, or YPG, and for that reason Kurdish politicians in Syria are not aware of the movement.