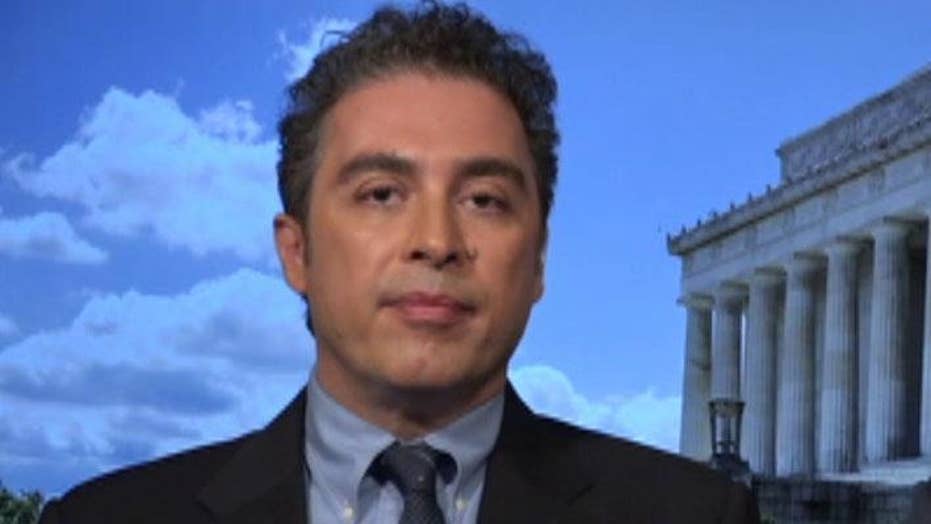 Iranian-American asks WH to help free his father and brother

'The Daily Briefing' web exclusive: Man says his family is being unjustly held in Iran.

An 81-year-old Iranian-American dual national was temporarily released from prison on Sunday over health concerns after the U.S. and Iran conducted backchannel discussions about releasing American prisoners, according to a State Department official.

Baquer Namazi, who is being detained in Iran with his son Siamek, was released from Tehran’s Evin prison for four days, but cannot leave the country during the leave. Both Namazis are serving 10-year prison sentences after closed-door trials.

“We welcome the release of Baquer Namazi given his deteriorating health, but we note that his release is only temporary. We call for the immediate and full release of the Namazi family, including his son Siamek, as well as other Americans unjustly held by the Iranian government,” State Department spokeswoman Heather Nauert tweeted.

Namazi’s attorneys said the 81-year-old is in poor health and needs medical treatment. Baquer previously underwent surgery in prison to have a pacemaker installed.

The U.S. has been in backchannel discussions with Iran to release the Namazis and other American citizens, Steve Goldstein, the Under Secretary for Public Diplomacy and Public Affairs, told Fox News.

He added that Iran, “to be truly humanitarian,” must release these American prisoners immediately.

Baquer was arrested in February 2016 after his son was taken into custody in October the year before while visiting family. Siamak’s arrest also occurred three months after the Iran nuclear deal was signed. Baquer’s wife, Effie Namazi, shared the news on Facebook at the time, saying her husband and son were “in prison for no reason.”

“I am extremely concerned and worried sick for Baquer’s health since he is an 80-year-old man and has a serious heart and other conditions which requires him to take special heart and other medicine,” Effie Namazi wrote in the post.

The Namazi family fled Iran after the 1979 Iranian Revolution. Siamak, an Iranian-American businessman, traveled back a number of times. He called for improved ties between Iran and the U.S., and urged Iranian-Americans to act as a bridge between the two governments. It was his calls for an improved relationship that set off suspicion among hard-liners in Iran. Siamak was accused by an Iranian website in May 2015 of taking part in a Western effort to infiltrate Iran.

Baquer, a former UNICEF diplomat and governor of Iran’s oil-rich Khuzestan province, was arrested after the Iranian authorities granted him permission to visit his son in the notorious Evin Prison in Tehran.

"My father, Baquer Namazi, was lured back to Iran from a brief trip abroad by the promise of seeing Siamak, but instead he was also detained," said son Babak during congressional testimony last July.

Analysts believe Iran is holding them and several other dual nationals as bargaining chips for future negotiations with the West.

Former FBI agent Robert Levinson is also believed to be held in Iran along with Xiyue Wang, Siamak and Baquer Namazi.