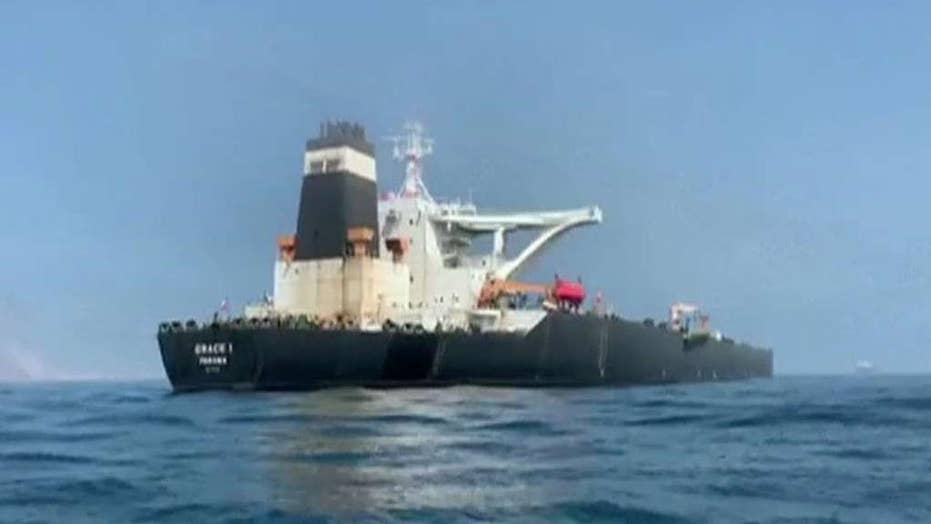 Gibraltar's Supreme Court has ruled against U.S. efforts to block the release of an Iranian supertanker; Greg Palkot has the details.

An Iranian supertanker has been released by Gibraltar on Thursday after being held for more than a month on suspicions it was trying to provide crude oil to Bashar Assad’s Syrian regime in violation of European Union sanctions.

The British territory’s Supreme Court announced that it had lifted a holding order on Grace 1, Fox News confirmed. The Iranian vessel had been held in Gibraltar since July 4 and officials from the Islamic Republic have been demanding its release, signaling that if Gibraltar parts with the ship, they may free the U.K.-flagged Stena Impero – an oil tanker captured in the Strait of Hormuz two weeks later.

News of the ship's release Thursday came hours after the U.S. made a last-minute move to seize control of it. Gibraltar’s government said earlier in the day its Supreme Court adjourned a scheduled decision on whether to release Grace 1 after it received an application from the U.S. Department of Justice seeking to extend its detention. But the Gibraltar Chronicle, quoting the court's chief justice, Anthony Dudley, reported that the application never made it before the court when the hearing resumed Thursday afternoon.

It is not clear if the ship has already left port in Gibraltar. Its government also has gotten recent assurances from Iran that the ship will not unload its cargo in Syria, according to the Gibraltar Chronicle.

IRAN HINTS AT SWAP WITH UK IN BID TO REDUCE TENSIONS

Reacting to the developments, Iran's Foreign Minister Mohammad Javad Zarif accused the U.S. of trying to "steal our property on the high seas."

"Having failed to accomplish its objectives through its #EconomicTerrorism — including depriving cancer patients of medicine — the U.S. attempted to abuse the legal system to steal our property on the high seas," Zarif tweeted, calling the Trump administration's moves a "piracy attempt."

Analysts had hoped that the release of the Grace 1 would see the Stena Impero similarly released. A Gibraltar government spokesman said Thursday that its captain, an Indian national, and three officers had been released from detention.

The whereabouts of the released crew, none of whom are Iranian, were not immediately known. The crew of the Grace 1 includes sailors from India, Pakistan and Ukraine, according to Iranian state television.

In this file photo dated Thursday, July 4, 2019, Grace 1 super tanker is anchored near a Royal Marine patrol vessel off the coast of the British territory of Gibraltar.  (AP)

Iran has been vocal ever since the capture of the ship.  In mid-July, Iranian President Hassan Rouhani warned Britain that it would face “repercussions” over the “mean and wrong” seizure of it.

Then on July 19, Iran captured the Stena Impero -- which had 23 crew members of Indian, Russian, Latvian and Filipino nationalities aboard -- in an apparent act of retaliation. The ship “was approached by unidentified small crafts and a helicopter during transit of the Strait of Hormuz while the vessel was in international waters,” Stena Bulk, the shipping company that owns the vessel, said in a statement.

Five days after the seizure of the Stena Impero, Rouhani said his country might be willing to free the ship if Gibraltar releases the Grace 1.

"We do not seek the continuation of tension with some European countries," Rouhani said in comments carried on his website. "Should they be committed to international frameworks and give up their wrong actions, including what they did in Gibraltar, they will receive a proportional response from Iran."

As of today, the Stena Impero remains docked in the waters outside of the Iranian coastal city of Bandar Abbas.

In a statement following the Gibraltar decision on the Grace 1, Britain's Foreign Office warned Iran to abide by the assurances that led to the release. The U.K. also insisted that there should be "no comparison or linkage" between enforcement of sanctions and "Iran's unacceptable and illegal seizure of, and attacks on, commercial shipping vessels in the Strait of Hormuz."