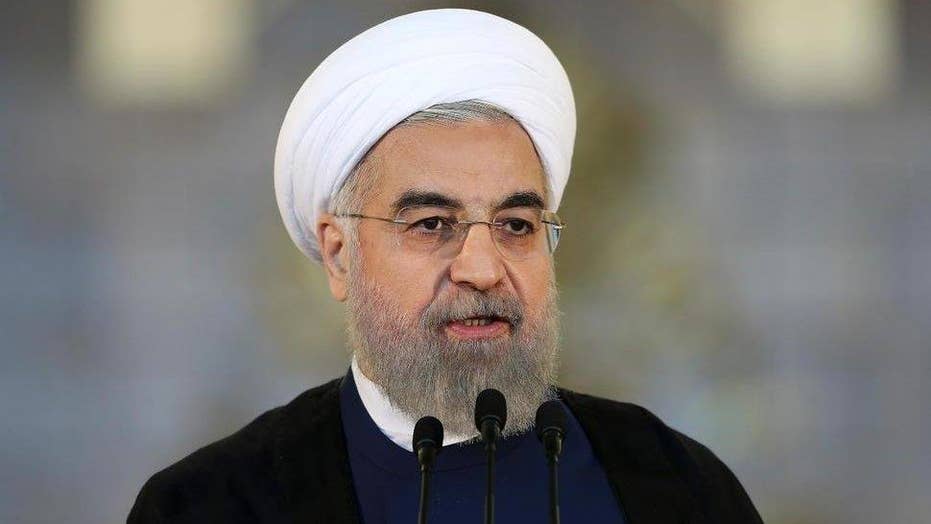 The White House responded cautiously Friday to claims by an Iranian dissident group alleging that Iran’s clandestine work on a nuclear weapon has continued unabated by the landmark nuclear deal that Tehran finalized with the Obama administration and five other world powers two years ago.

At a news conference in Washington, members of the National Council of Resistance of Iran (NCRI) brandished recent satellite imagery and intelligence purportedly derived from informants inside the Iranian military to bolster their claim that the Islamic Regime is still working covertly on what nuclear experts call weaponization: the final station on the path to nuclear weapons.

“The engineering unit that is charged and tasked with actually building the bomb in a secret way for the Iranian regime is called the Organization of Defensive Innovation and Research,” said Alireza Jafarzadeh, deputy director of NCRI’s Washington office. That unit, whose Persian acronym is SPND, was first exposed by Jafarzadeh’s group in 2011, and was designated by the State Department in 2014 because U.S. officials said SPND “took over some of the activities related to Iran’s undeclared nuclear program.”

“Our information shows that their activities have been continuing in full gear, despite the JCPOA,” Jafarzadeh said, using the acronym for the Joint Comprehensive Plan of Action, which is the formal name for the nuclear deal.

NCRI’s startling claim came in the same week that Secretary of State Rex Tillerson certified to Congress that Iran is meeting the terms of the JCPOA but also announced an interagency task force to reevaluate the entire deal, saying the JCPOA is not meeting its objective. President Trump followed that up the next day by saying the Iranians “are not living up to the spirit of the agreement.”

That prompted a sharp tweet of rebuke from the Iranian foreign minister, an architect of the nuclear deal. Dr. Javad Zarif posted: “We’ll see if US prepared to live up to letter of #JCPOA let alone spirit. So far, it has defied both.”

Asked about NCRI’s allegation and supporting evidence, Michael Anton, a spokesman for the White House National Security Council, said only that his colleagues are “carefully evaluating” the NCRI package against “the best intelligence reporting and analysis available to the United States.”

NCRI’s satellite imagery is focused on the military base at Parchin, a site to which inspectors for the International Atomic Energy Agency have been granted only limited and tightly controlled access. The photos outline an area in the north of the sprawling base where installations surrounded by berms are visible. According to NCRI officers, the newly constructed site is known internally as “Plan 6.”

There, the dissident group alleged, a sub-unit of SPND known as METFAZ – another Persian acronym for the formal title of the Center for Research and Expansion of Technologies on Explosions and Impact – is working with high explosives in ways the NCRI said are identical to the “possible military dimension” that Western officials long suspected Iran was pursuing with its nuclear program.

Skeptics of NCRI note that it is the political affiliate of an Iranian opposition group, known as MEK, that spent fifteen years on the State Department’s list of foreign terror organizations. But many have seen NCRI’s disclosures about alleged clandestine nuclear activities or sites in Iran borne out, starting with the group’s identification of the theretofore secret installations at Natanz and Arak. Frank Pabian, an adviser on nuclear nonproliferation issues at the Los Alamos National Laboratory, was quoted in 2010 as telling the New York Times of the NCRI: “They’re right 90 percent of the time.”

To assess the imagery of Plan 6 at Parchin, Fox News consulted  a pair of nuclear scientists and arms control analysts who are among the world’s most renowned. David Albright, the trained physicist and former U.N. weapons inspector in Iraq, told Fox News the structures visible in the satellite photography are consistent with a facility that makes high explosives; but he noted that Iran has the right to do so under the JCPOA, and that the imagery yielded no outward sign that Iran was also testing high explosives at the site. Still, he believes the IAEA should press for access there. “The international inspectors should use authorities under the nuclear deal to go and look at this site, and see what's going on and start to verify a critical part of the nuclear deal,” Albright said, “namely, those activities involved in the development of nuclear weapons.”

Olli Heinonen spent nearly three decades at the IAEA, eventually rising to the level of the number-two official at the agency: deputy director-general. He has traveled to Iran for inspection tours and other business some twenty-five times. He reached a similar assessment about Plan 6, even as both men emphasized the need for more information to make determinative judgments.

“We see that the buildings are surrounded by berms; they are a distance from each other. This is a typical design for a site that works with high explosives,” Heinonen told FoxNews. “I think there are serious questions to be asked [of] the Iranian government. Most likely IAEA should have access to this site.”

Neither the IAEA nor the Iranian mission to the United Nations responded to requests for comment.