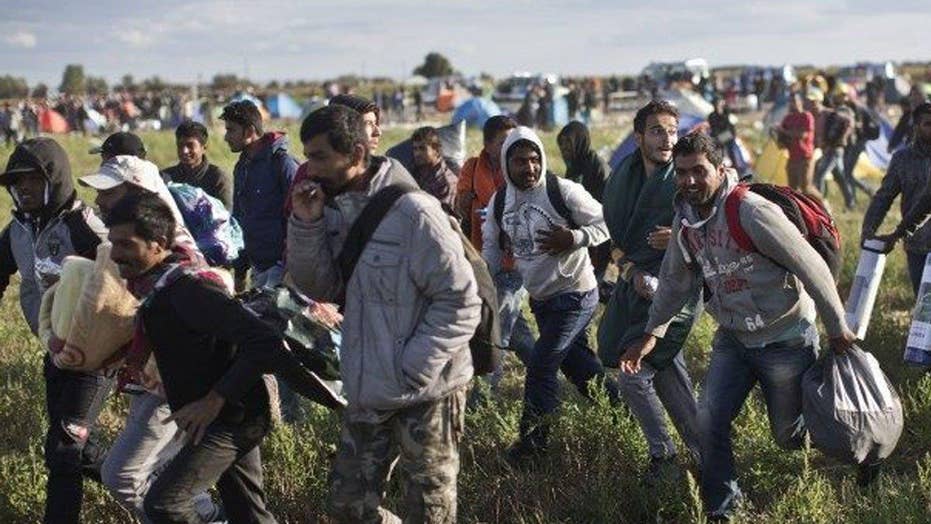 Hillary Clinton calls to increase the refugee population in the U.S.; debate on 'Hannity'

Hungary will hold a government-initiated referendum on Oct. 2 seeking political support to oppose any European Union efforts to resettle refugees among its member states, the office of President Janos Ader said Tuesday.

Ader's office said the question on the ballot will be: "Do you want the European Union to prescribe the mandatory settlement of non-Hungarian citizens in Hungary even without the consent of Parliament?"

Prime Minister Viktor Orban, who staunchly opposes immigration, said earlier that a "no" vote would be "in favor of Hungary's independence and rejecting the mandatory settlement plan."

Government officials welcomed Ader's decision, which came after legal challenges to the referendum had been exhausted.

"We believe that only Hungarians, not Brussels, can decide who we want to live with in Hungary," said Antal Rogan, head of the prime minister's Cabinet.

"The Hungarian prime minister's opinion on refugees is already known, so I don't expect from the referendum any change to the current situation," Merkel said in Berlin.

While the far-right Jobbik party said it would ask supporters to vote against the EU quotas, left-wing opposition parties called for a boycott. Turnout of at least 50 percent is needed for the referendum to be valid.

The referendum "is in fact Viktor Orban's anti-European hate campaign, which is contrary to Hungary's interests," said a statement from the opposition Together party announcing its boycott.

"Everyone should stay at home so we can stay in Europe," said Socialist Party deputy chairman Zoltan Gogos. The Socialists see the referendum as the first stage of preparing to leave the EU.

Hungary has already sued the EU at the European Court of Justice regarding an earlier plan to redistribute 120,000 asylum-seekers already in the bloc among its 28 countries.

Last year, nearly 400,000 refugees and other migrants passed through Hungary on their way west. The flow was greatly stemmed after October, when Hungary shut the razor-wire fences erected on its borders with Serbia and Croatia.