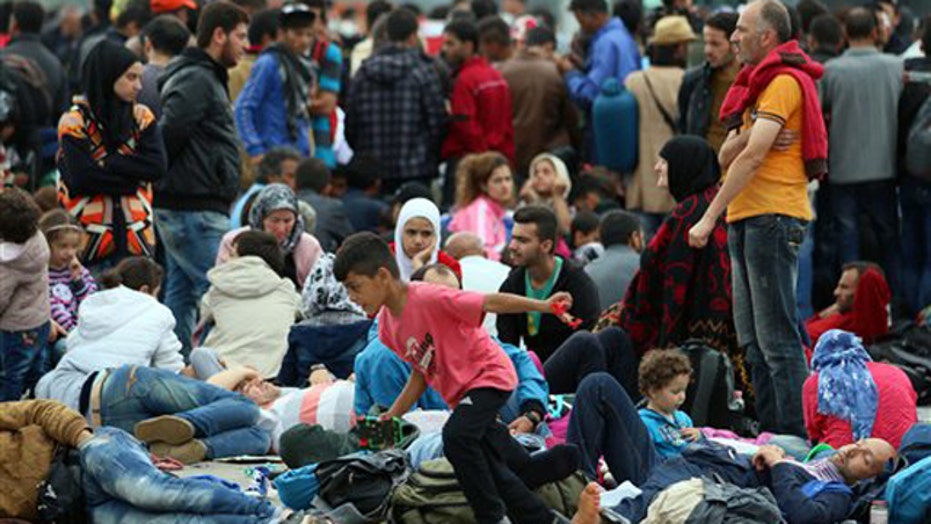 House Homeland Security Committee Chairman Michael McCaul calls the migrant crisis in Europe 'tragic' but can't support Obama's desire to allow 10,000 into US. Col. Oliver North goes' On the Record' to sound off.

Hungary's foreign minister says his country is also planning to build a razor-wire fence along part of its border with Romania to stop the flow of migrants through the country.

The state of emergency gives special powers to police and other authorities while paving the way for the country's army to be deployed to assist police with border patrol and refugee-related duties.

The measures come as a set of new laws took effect to stop the huge flow of migrants through the country.Despite the laws, hundreds of refugees spent Monday night in tents or out in the open on the Serbian side of the border.

Figures showed that a record 7,437 people entered Hungary from Serbia on Monday, beating the previous day's highest of 5,809.

The turmoil at the Hungarian-Serbian border comes a day after the 28-nation bloc failed to come up with a united immigration policy at a contentious meeting in Brussels. The ministers did agree to share responsibility for 40,000 people seeking refuge in overwhelmed Italy and Greece and spoke hopefully of reaching an eventual deal -- next month or by the end of the year -- on which EU nations would take 120,000 more refugees, including some from Hungary.

But their slow deliberations appeared disconnected from the rapidly shifting situation on the most besieged borders of Europe, where Austria, Slovakia and even the Netherlands joined Germany in reintroducing border controls for the first time in a generation in a bid to record the arrivals of thousands daily from the Middle East, Asia and Africa.

The checks, involving police on trains and on border roads, snarled traffic and slowed the speed and volume of refugees reaching Germany, which had received more than 60,000 newcomers since throwing opens its borders Sept. 5 to people trying to reach the E.U. heavyweight via Hungary, the Balkans and Greece.

Germany's decision to deploy police on borders and trains could trigger "a domino effect and then we can forget Schengen," he said, referring to the 1985 agreement that gradually removed passport checks on most European borders.