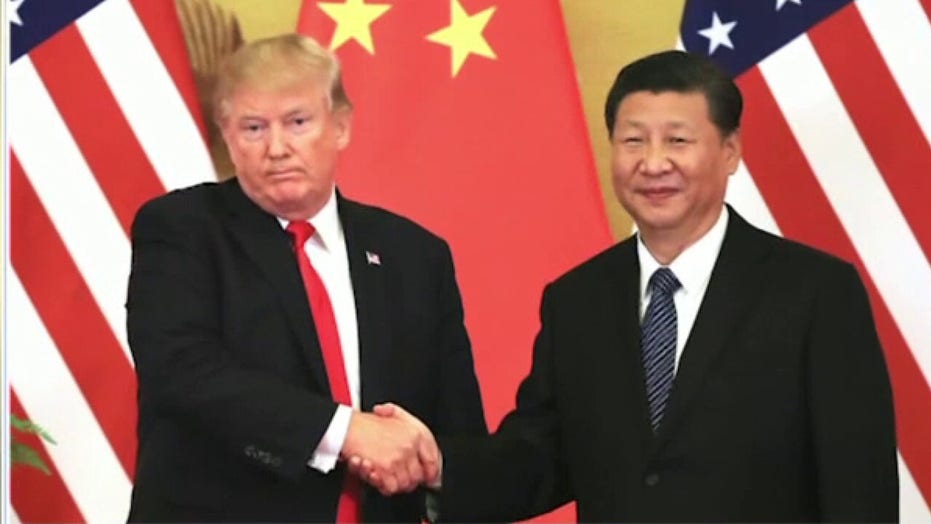 Newt says China will 'dominate world' if tech theft isn't stopped, 'it's a matter of life and death'

The coronavirus pandemic may have shed light on China's influence in America over the supply chain, including life-saving medicines, technology and equipment.

But some analysts believe the ongoing crisis lays bare the inroads China has made on U.S. soil.

The American Security Institute recently released a report and launched a campaign, featuring a billboard in Times Square, to draw further attention to the extensive array of sectors the Chinese government and its partners have invested into. But, exactly how much does the nation own?

In 2017, the United States imported $4.6 billion in agricultural goods from China, which is also responsible for much of the global supply of soy and pea proteins that are found in nutritional supplements and synthetic meats. A Chinese firm has also purchased Smithfield, the world's largest pork processor and hog producer.

(Smithfield said in a later statement pertaining to their ownership structure that they are "a U.S. company that provides more than 40,000 American jobs and partners with thousands of American farmers. The company was founded in Smithfield, Virginia, in 1936 and was acquired by Hong Kong-based WH Group in 2013. WH Group is a publicly-traded company with shareholders around the world. Anyone anywhere can purchase shares of WH Group on the Hong Kong Stock Exchange. WH Group’s shareholders include many large U.S.-based financial institutions."

The Chinese government's theft of intellectual property has been an open secret for decades. More recently, U.S. authorities have discovered China is funding American university researchers, who don't always disclose those contributions.

The manufacturing of smartphones and other household items is heavily reliant on China, which controls most of the rare earth minerals that make those items work. Additionally, China is seeking to build 5G networks in the United States and other Western countries, which could potentially feed personal information and sensitive data to the Chinese Communist Party.

Chinese firms have bought AMC Entertainment, Legendary Entertainment, and other media companies. Control of 8,000-plus of American theater screens and other media platforms allows China to project "soft power" and block unflattering depictions of the Chinese government from being presented, both in terms of creative production and mass distribution.

"Under China's Communist Party dictatorship, private companies are forced to bend to the government's will," the report states.

"A recently passed law in China requires companies to share data with Chinese communist spy agencies if requested. [U]nder Xi Jinping, the Communist party has returned to being the ultimate authority in business," writes The Guardian. And Human Rights Watch has written that China is an 'existential threat' to human rights."

And while the U.S. grants China permission to buy its companies, China does not allow U.S. companies to operate the same way on their soil.

"The first priority is to reclaim our critical supply chains so that we can become self-secure instead of reliant on the Chinese government," Will Coggin, managing director of the American Security Institute, told Fox News.

The extent of Chinese investment in recent years has also raised red flags around U.S. national security, particularly in the realm of rare earth minerals. These are especially vital not only for high-technology products such as smartphones and electric vehicles but for U.S. frontline weapons including the F-35 fighter, which requires 920 pounds of rare earth minerals.

"In 2017, the United States produced zero rare earth minerals. China, on the other hand, accounted for more than 80 percent of the world's supply," the report stated.

However, the full extent of the Chinese investment as it stands in the U.S. today is far from transparent.

"The Chinese have a strong foothold here in the U.S., and Chinese firms have access to what seems like infinite government lending, and because the country's goal of world dominance is ingrained into the minds of their business leaders," explained Paul Murad, president of Nevada-based real estate firm Metroplex. "It means our U.S. directors have a hard task on their hands when it comes to negotiation."

Milos Maricic, an international affairs expert and World Economic Forum contributor, concurred that while China owns close to $150 billion in U.S. companies – not particularly huge in comparison to the U.S. economy – there is a lot about the available figure that we simply do not know.

"The number is very difficult to gauge correctly due to complicated ownership structures that the Chinese sometimes employ. It could be bigger," he surmised.

Some U.S. lawmakers are pushing back amid the coronavirus fallout, which ignited an initial panic over concerns of critical medical shortages and Beijing's threats to withhold the needed goods.

In late May, the Senate unanimously passed the bipartisan Holding Foreign Companies Accountable Act in a bid to force foreign companies – with China at the likely forefront – to adhere to U.S. securities law, and compel some to be removed from American stock exchanges. The bill, which is yet to move through the House, would necessitate that "an issuer must make this certification if the Public Company Accounting Oversight Board is unable to audit specified reports because the issuer has retained a foreign public accounting firm not subject to inspection by the board.

More than 200 foreign firms – mostly Chinese with a combined market capitalization of almost $2 trillion – are said to not be meeting this standard; so their stocks are traded, but U.S. investors have limited insight into what is going on internally with the companies. Subsequently, China and other international players would be obligated to accede to an audit that can be reviewed by the nonprofit Public Company Accounting Oversight Board, which oversees audits of all U.S. companies that endeavor to raise money in public markets.

"Chinese companies have been carrying out unchecked reverse mergers for years now, and the media (influence) has been going under the radar for years now," Murad added. "Under President Trump, the U.S. was the first to recognize their nonstop deceits, and now the rest of the world has a clearer picture of China's ambition."