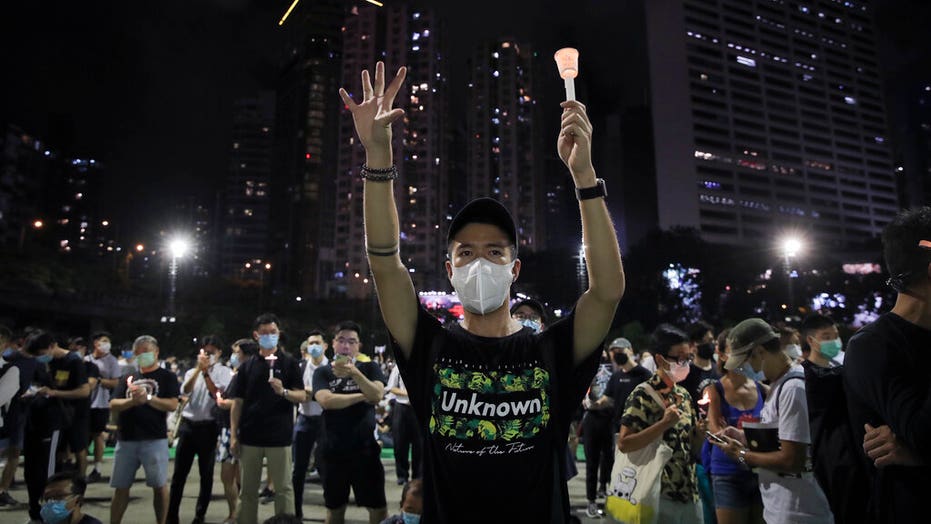 Participants light candles during a vigil for the victims of the 1989 Tiananmen Square Massacre at Victoria Park in Causeway Bay, Hong Kong, Thursday, June 4, 2020, despite applications for it being officially denied. (AP Photo/Kin Cheung)

Honoring the monumental moment for China's democracy in 1989 -- when hundreds of student-led protesters rallying against the Communist Party were killed as tanks rolled into Tiananmen Square -- was banned for the first time this year.

Earlier this week, police said it rejected the organizers’ request for the vigil because it would violate coronavirus social distancing rules that ban gatherings of more than eight people.

Still, crowds of people, most wearing masks, flooded the park to hold a moment of silence at 8:09 p.m. Many chanted “Democracy now” and “Stand for freedom, stand with Hong Kong.”

After the vigil ended in Victoria Park, groups of protesters dressed in black carried flags that said, “Liberate Hong Kong, Revolution of our times” as well as “Hong Kong Independence.”

In this aerial view, participants gather for a vigil to remember the victims of the 1989 Tiananmen Square Massacre, despite permission for it being officially denied, at Victoria Park in Causeway Bay, Hong Kong, Thursday, June 4, 2020. (AP Photo/Vincent Yu)

Meanwhile, Tiananmen Square itself was mostly desolate, except for the large police presence and show of armored vehicles guarding the space. Few pedestrians lined up at security checkpoints, where they had to show IDs to be allowed through as part of nationwide mass surveillance to prevent any commemoration of the event.

The new national anthem bill is in part reactionary to anti-government protests last year, but Beijing's grip over Hong Kong continues to tighten.

In addition, 15 veteran activists were recently arrested on charges of organizing and taking part in last year's demonstrations.

U.S. Secretary of State Mike Pompeo tweeted criticism of China and Hong Kong for banning the vigil earlier this week before meeting with a group of Tiananmen Square survivors at the State Department.