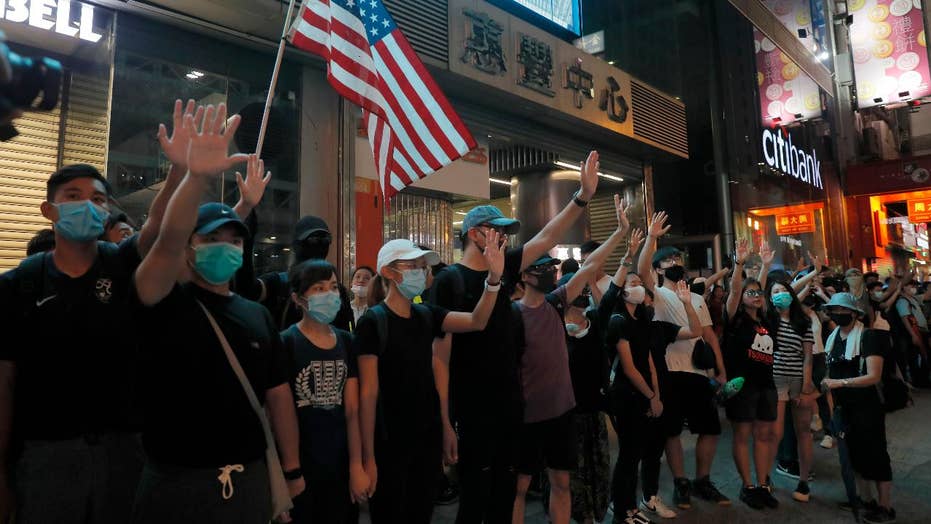 Hong Kong demonstrators defied a new face mask ban as they took to the streets Saturdays in relatively quieter protests following an evening of violence and unrest.

Marchers - wearing blue doctor's masks - told reporters that the protest movement was merely harboring its strength for the long haul as Hong Kong's most disruptive crisis since its "one nation, two systems" agreement with the Chinese in 1997.

Shops and banks were shuttered. Lines formed at cash machines, while the entire transit network of subways and trains that usually handles more than 4 million trips a day was closed.

Students march to the Chinese University to show support to those students who were arrested by police in Hong Kong, on Thursday. (AP)

The government' initiated the ban after widespread violence in the city on Tuesday, which marred China's National Day and ended in blood. Two teenagers - 14 and 18 years old - have been shot by live ammunition by police.

Hong Kong leader Carrie Lam is blamed for sparking the movement with a now-abandoned bill that would have allowed criminal suspects to be extradited for trial in Communist Party-controlled courts in mainland China.

On Friday, she announced the criminalization of the masks at rallies, as well as denounced violence.

"People are asking can Hong Kong go back to normal? Is Hong Kong still a place where we can have our sweet home?" Lam asked. "We must stop the violence. Now, it's all over Hong Kong."

Lam added that the ban targeted violent protesters and rioters and "will be an effective deterrent to radical behavior."

But, analysts cautioned that the use of the Emergency Ordinance for the first time in over half a decade set a dangerous precedent.

Those who break the regulation will face a year in jail. Police said no arrests had been made so far on the anti-mask ban but did not explain why.

Before Lam spoke, thousands of masked protesters marched through city streets, chanting slogans for greater democracy including "Wearing a mask is not a crime." Cars stuck in the chaos honked their support.

A masked protester holds up his hand to represent the protesters' five demands as he walks next to a banner reading "Hong Kong police deliberately murder" in Hong Kong on Saturday, Oct. 5, 2019. All subway and trains services are closed in Hong Kong after another night of rampaging violence that a new ban on face masks failed to quell. (AP Photo/Vincent Yu)

In a televised address broadcast on Saturday, a solemn Lam described Hong Kong as “semi-paralyzed."

Even though many blamed Lam, some are turning to the government's side in the wake of the riots.