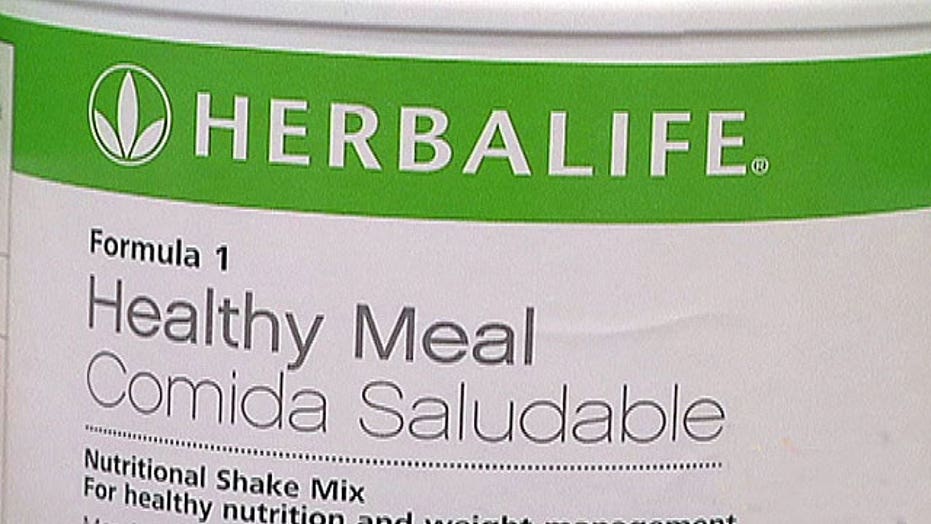 The 49-year-old New Jersey mother of two has been selling the products of the beleaguered California-based nutritional supplement company for almost 18 years now. “I make a living from Herbalife,” Calixto said in Spanish. “The company has opened up opportunities for me.”

Calixto is rare in that regard. Extremely rare.

Paltry numbers, especially considering that the company reported sales of $4.8 billion in 2013 and $1.3 billion for the first quarter of 2014—an increase of 12 percent over the previous year.

The words that people use most frequently to describe what’s wrong with Herbalife’s business model are “pyramid scheme.” That’s because top-selling distributors earn a commission on the products that the members they bring in sell, and on the members that those people bring in, and that those members bring in, and so on.

So does Herbalife make billions because it sells a lot of product or because distributors rope in a lot of new vendors (who have to buy products by the case)?

Critics, including hedge fund manager William Ackman, the founder and CEO of Pershing Square Capital Management, have called the company a hollow investment – and in December 2012 he started going after Herbalife stock.

He sold about $1 billion worth of its stock without actually owning any. It’s a maneuver that’s called “short selling,” and it pays off only if the value of the stock subsequently falls and people become desperate to unload it.

After an initial drop, the company’s stock rebounded thanks to investments by major players like Carl Icahn as well as an aggressive plan to buy back the stock. (In the first quarter of 2014 alone, Herbalife bought back nearly $700 million in common shares.)

Ever since, in what many have called an obvious conflict of interest, Ackman has employed a phalanx of publicists to try to convince politicians and journalists to investigate the company. The practice is not that unusual on Wall Street, but the vigor with which Ackman has pursued it and the money he has spent in the process, some say, is unsettling.

The forces now arrayed against the company include civil rights organizations, members of Congress and the Federal Trade Commission, which has opened an investigation into its business practices. All of them were brought into the fight, to one extent or the other, through Ackman’s efforts.

Critics of the company argue that the discrepancy between Herbalife’s sales and the earnings of so many of its distributors is evidence that the corporation operates more like a pyramid scheme than a traditional direct sales or franchising company.

Marco Antonio Gonzalez, director of corporate communications for Herbalife, admits the numbers are underwhelming. “It is a very small number of people who make a living selling our products,” he told FNL.

“We conducted a survey of 10,000 members with Nielsen and found that 73 percent join just to get the discount on our products,” Gonzalez said.

Even so, every one of those 525,251 people—as many as four-fifths of whom are believed to be Latinos—had to purchase some amount of Herbalife product, “and if they don’t sell it, then they’re stuck with the product,” said Esther Vargas, a Nevada representative for the League of United Latin American Citizens (LULAC).

Vargas’ group, along with the Federation of United Michoacán Clubs of Nevada and the nonprofit legal organization, Hermanidad Mexicana, represent what Vargas says are “hundreds” of Latinos in Nevada and other states who claim to have lost anywhere from $200 to $60,000 trying to sell Herbalife products.

Vargas, who testified against the company before the Federal Trade Commission (FTC) earlier this year, believes Herbalife is aware that many of its Latino distributors don’t possess the skills needed to operate a business from home, but still persuade them to invest their money in the company.

She said that a lot of them are undocumented workers. “They can’t find jobs,” Vargas said. “They need money and in order to provide for the families they’re targeted.”

But Herbalife insists that the company is not preying on immigrants.

“I wish I knew why people say things like that. If anyone is targeting undocumented workers, it isn’t Herbalife,” Gonzalez said. “Maybe there are distributors who do, but they are independent vendors.”

But Brent Wilkes, the national executive director of LULAC, said the company encourages distributors to make sales and recruit new members at any cost, even if that means engaging in fraudulent behavior.

“Then they hide behind this idea that these are independent distributors acting without their knowledge,” he said.

Wilkes said there are a number of former Herbalife vendors who have approached LULAC with information about their experiences. According to Wilkes, many distributors exaggerated the amount of income one can earn or make fraudulent claims about the products.

“That they shrink tumors, things like that,” Wilkes said. “That’s a great hook with undocumented immigrants since they can’t afford to go to the hospital… And undocumented people are the least likely to complain if they lose their money. They desperately want to believe.”

A Las Vegas-based distributor who agreed to be identified as “Karen” for fear that she would lose her standing in the company, said in a telephone interview that she’s been a member for 20 years.

“Herbalife created Spanish-speaking classes and workshops to accommodate the growing Hispanic community,” Karen said. “People who fail with Herbalife simply don’t treat it like a career and aren’t making money regardless of their ethnicity.”

Asked why people like Karen might feel the need to retain their anonymity, Gonzalez answered, “Press accounts about the company recently have been very negative. Our members may be very apprehensive about participating in something that will hurt their own business.”

Another Herbalife spokesman contacted separately, James Golden, made the point that, “Herbalife ensures that distributors wishing to create a business opportunity understand that results vary and depend on time, energy and dedication.”

For the people like Claribel Calixto who work hard to make a living, the company has been nothing but a blessing.

“I truly love helping people to improve their lifestyle and their nutrition, but I didn’t become a member to make money,” she said. “But after the birth of my first child, I lost a lot of weight using their products. My family said, ‘Why don’t you sell it?...’ I thought, ‘Well, let me try.’”

She added, “The company trained me, helped me learn how to sell. It’s a good system.”

Calixto is one of the lucky ones. Or one of the ones who’s worked hard enough to make the system work for her.

Whatever you feel about the company, Herbalife’s Gonzalez had two questions for detractors.

“What you have to ask yourself is ‘Why Herbalife?’” Gonzalez said, “and ‘Why now?’”