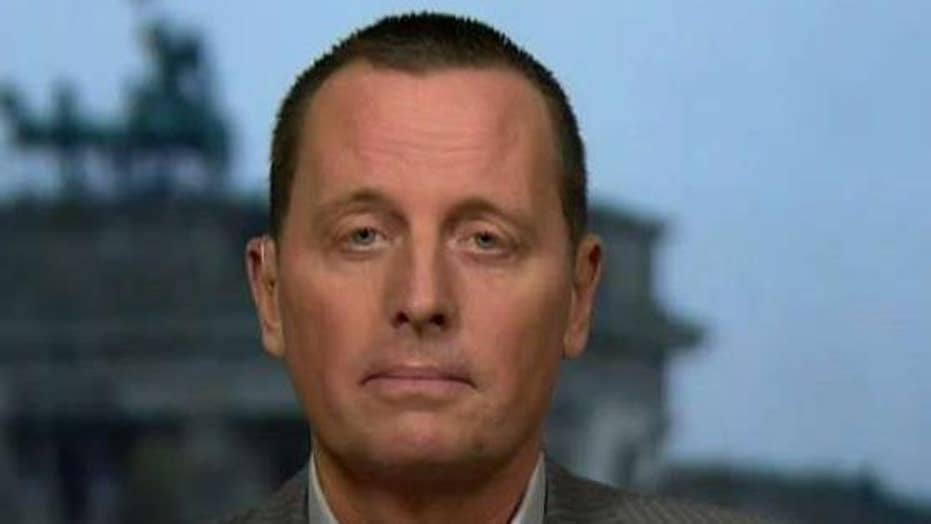 Amb. Richard Grenell on the 30th anniversary of fall of the Berlin Wall

The Berlin Wall stood for 28 years. On Saturday, Germany and a host of European countries celebrated the 30th anniversary of when the infamous barrier began to crumble down.

Leaders from across Europe attended a ceremony at Bernauer Strasse - one of the last areas of the wall that still remains - where they placed roses in gaps of the wall to honor what it meant for their ancestors and the country.

"The values that Europe is based on - freedom, democracy, equality, rule of law, human rights - these are not to be taken for granted," German Chancellor Angela Merkel said at the commemoration ceremony on Saturday.

Young people stuck flowers in remains of the Berlin Wall during a commemoration ceremony to celebrate the 30th anniversary of the fall of the Berlin Wall at the Wall memorial site at Bernauer Strasse in Berlin, Saturday, Nov. 9, 2019.  (AP)

ROMINA BOCCIA: WHAT BANANAS TELL US ABOUT SOCIALISM AND THE FALL OF THE BERLIN WALL

"In the future, Europe will be fighting for human rights, tolerance, and democracy," she added. "This is a time of global changes, so this is a pressing issue."

German Chancellor Angela Merkel, left, shakes hands with visitors prior to a memorial service in the chapel at the Berlin Wall Memorial in Berlin, Germany, Saturday, Nov. 9, 2019. (AP)

The Berlin Wall was constructed nearly overnight in 1961 with barbed wire and barricades cutting through the city after nearly 2.5 million East Germans fled to the west. It divided the country for nearly 28 years and symbolized the Cold War.

Many died trying to get over the barrier throughout the years.

Flowers dropped in front of portraits from people died at the Berlin wall after commemorations celebrating the 30th anniversary of the fall of the Berlin Wall at the Wall memorial site at Bernauer Strasse in Berlin, Saturday, Nov. 9, 2019.  (AP)

There was a stark contrast between the western side of the wall, which had a free press, travel, and elections and the eastern communist side, which had travel restrictions, barbed wire, and the ruthless secret police.

The Wall fell on November 9, 1989, after the German Democratic Republic announced travel restrictions would be lifted for East Germans.

Crowds scaled the blockade, tearing down portions of the wall in an event that signified freedom for all Germans, and the end of the Cold War.

In this Saturday Nov. 11, 1989 file photo, hundreds of Berliners climb on top of the Berlin Wall at Brandenburg Gate in Berlin, demanding in a peaceful protest that the wall will be pulled down.  (AP)

Axel Klausmeier, the head of the Berlin Wall memorial site, recalled Germans in a dream-like state as they hugged each other on that date, many crying tears of joy.

A statue honoring Ronald Reagan - who was president during much of the Cold War in the 80s - was also unveiled at a site overlooking the area where he made the iconic speech in 1987, imploring former Soviet leader Mikhail Gorbachev to dissolve the barrier.

Together with United States Ambassador in Germany Richard Grenell, right, and Fred Ryan Board Chairman of the Reagan Foundation, left, Secretary of State Mike Pompeo unveils a statue of former President Ronald Reagan on the top of United States embassy in Berlin, Germany, Friday, Nov. 7, 2019.  (AP)

Concerts and public debates highlighted the festivities planned throughout the city, as well as a concert at Berlin's Brandenburg Gate.

In Paris, a French chocolate sculptor celebrated the historic occasion by grabbing a hammer and smashing a chocolate replica of the Berlin Wall to the delight of bystanders who carried bags of the chocolate chunks away.

French chocolate maker Patrick Roger, left, and his creative assistant Angelo Dao, right, destroy a reproduction of the Berlin wall in chocolate, to mark the 30th anniversary of the fall of the Berlin Wall, in Paris, Saturday, Nov. 9, 2019.  (AP)

Back in Germany, Markel hopes the lessons learned during a time when the German people were divided should be a historical teaching tool for others in modern times.

"The Berlin Wall, ladies, and gentlemen, is history and it teaches us: No wall that keeps people out and restricts freedom is so high or so wide that it can't be broken down," she said.