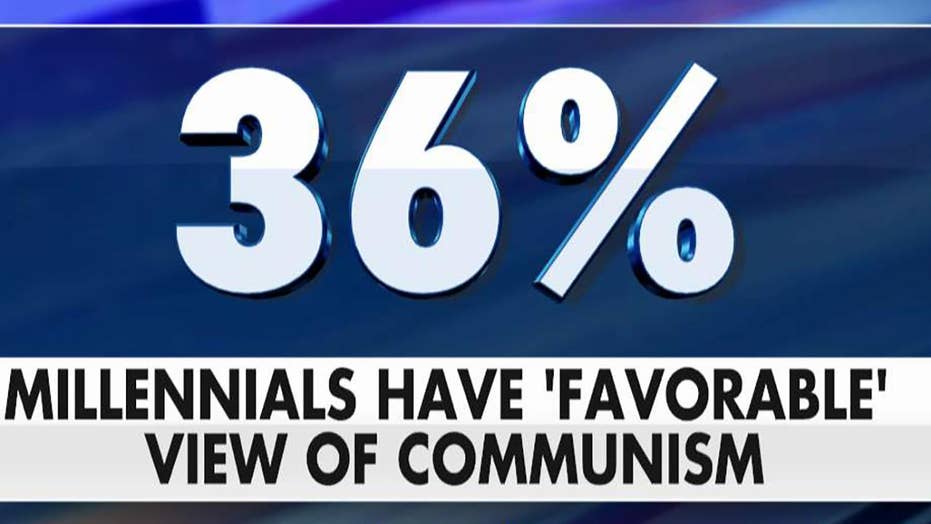 1 in 3 millennials see communism as favorable, 7 in 10 would vote for a socialist

Are younger Americans just misinformed or do they believe in these practices? Campus Reform editor-in-chief Cabot Phillips weighs in.

Exactly 30 years ago – on Nov. 9, 1989 – the occupants of Berlin tore down the wall that divided their city, marking the beginning of the end for the Union of Soviet Socialist Republics and nearby nations then known as its communist satellites.

Within two years, the world’s largest socialist economy would also crumble in Russia, and the satellites gradually fell out of orbit and abandoned socialism as well. East Germany and East Berlin ceased to exist when a united Germany and united Berlin were created.

The millennial generation is the first to come of age since that time without personal memories of these events. And if our current political environment is any indication, the lessons we learned are fading.

For many progressives, the Soviet Union’s collapse was an unmitigated disaster. For decades, they had invested their credibility in the Soviet vision of a socialist “workers’ paradise” that never materialized.

Rather, an oppressive group of elites governed impoverished masses who suffered the equality of misery and desperation. Those living in tall buildings in East Berlin could look over the wall to see their prosperous free-market West Berlin neighbors. Finally, they tore the wall down.

As the wall and then the Soviet empire collapsed, socialism’s abject failure was in plain view. Even the left’s herculean efforts at double-talk could no longer conceal it. The joke at the time was that the only place you could find a socialist was the faculty lounge at Harvard.

One of us remembers. The other is a millennial (born in November 1989 when the Berlin Wall fell).

Millennials are the first generation without personal knowledge of anti-communist presidents –such as John F. Kennedy, Ronald Reagan, and George H.W. Bush – who faced a collectivist ideology that was spreading like wildfire across the globe.

Their ultimate victory resulted in a freer and more prosperous world. As measured by World Bank data, poverty, hunger, child mortality, illiteracy and pollution have all declined significantly worldwide with the growth of economic freedom following the Soviet Union’s collapse.

Yet today, over half of those in the millennial generation describe themselves as socialists. Perhaps this is because the generation born in the days after Berliners tore down that wall have no memories of the threat to international freedom posed by what President Ronald Reagan aptly called the “evil empire."

In fact, empowered by millennial supporters, Sens. Elizabeth Warren, D-Mass., and Bernie Sanders, I-Vt., have been able to launch viable campaigns for the Democratic presidential nomination based on thinly veiled and overt socialist policies.

While Warren and Sanders may not call for traditional socialism’s direct government ownership of the means of production, they do advocate extensive legislation, regulation, and taxation managed by a massive federal bureaucracy as the means to implement pervasive government control over our economy.

For example, Warren and Sanders both support the Green New Deal that would give our government unprecedented authority over the economy’s health care, energy, transportation and construction sectors.

The Green New Deal would empower government elites to set business goals, discouraging innovation and investment, all while restricting the choices available to consumers in a free market. Warren and Sanders' proposed “Medicare-for-all” alone would eliminate private enterprise entirely from the health care sector, which represents roughly 20 percent of our economy.

Of course, increased taxes are a cornerstone of their policies. But, even massively increasing individual and business income taxes would be insufficient to fund and empower the government they envision. So, among other tax increases, they also want to impose a “wealth tax” on personal assets, an open homage to the class warfare that serves as socialism’s primary justification.

Would substituting pervasive government control for government ownership avoid traditional socialism’s pitfalls? Of course not. Just like traditional socialism, the Warren/Sanders version would all but eliminate the incentives to succeed, to take risks and to invest in the future that are the hallmarks of free-market capitalism.

Make no mistake, despite what they may claim, Warren and Sanders envision a government far more powerful than those of Denmark and Sweden. While both of those nations have generous welfare systems, they also have free-market economies that rank as the 14th and 19th freest in the world on the Heritage Foundation’s Index of Economic Freedom (they also both abolished their wealth taxes over the past decades).

Warren and Sanders propose far more than simply increasing government welfare to the levels found in these Scandinavian nations.

They would seize the power of consumers to guide our economy, to decide which businesses succeed and which fail, and hand that power over to a group of government elites they would have us elect them to lead. That is what they mean by "democratic socialism." Should young Americans really trust politicians with that kind of power?

Milton Friedman once famously said that "underlying most arguments against the free market is a lack of belief in freedom itself."

The benefits that flowed to the world’s poor and marginalized following the fall of the Berlin Wall stand as a testament to freedom’s preeminent importance. Our nation was founded on a belief in that freedom. It's long past time to reignite that belief in the next generation.

Jon Hartley is an economic policy analyst, researcher and writer, and is a regular economics contributor at Forbes and other news organizations.