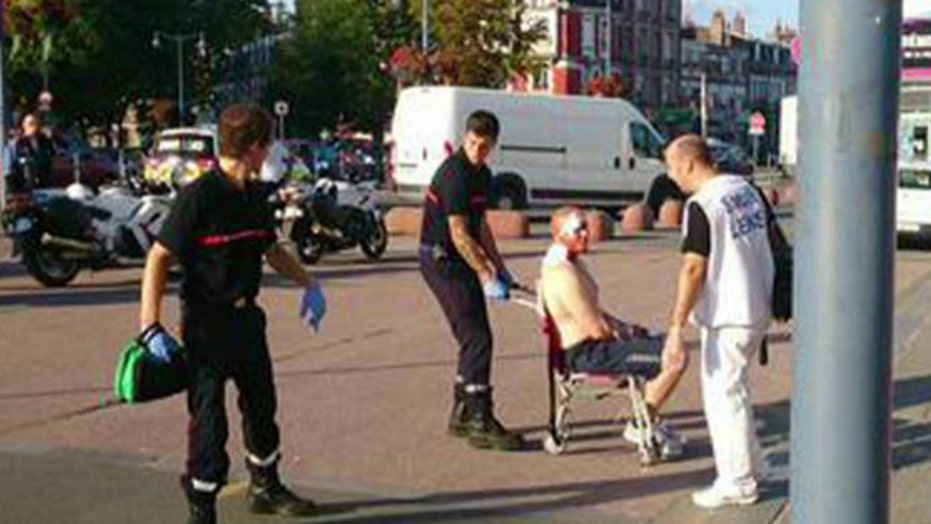 Gunman with assault rifle opens fire on train in France

A day after three heroic Americans helped subdue a gunman on a Paris-bound high-speed train, French counter-terrorism officials Saturday may have found links between the suspected gunman and Islamic militants, a French official close to the investigation told the Associated Press.

The investigation still in its early stages has yet to yield a smoking gun. Questions remain as to the official identity of the suspect.

French counter-terrorism officials Saturday identified the man as a Moroccan linked to Islamic militants who was known to intelligence authorities in three countries.

French Interior Minister Bernard Cazeneuve said earlier Saturday that Spanish authorities had alerted French intelligence to the man in February 2014 because he "belonged to the radical Islamist movement," and the French put him on a security watch list.

Fox News could not immediately confirm the reports.

The officials suspected the Moroccan was the man who targeted an Amsterdam to Paris train on Friday armed with a Kalashnikov and other weapons.

The gunman fired off one round from the rifle as the train hurtled through Belgium, apparently injuring a French passenger. He was then overpowered and disarmed by five passengers, three of them Americans, including two who were U.S. military servicemen.

The Belgian prime minister called the incident a terrorist attack.

An Interior Ministry official told the Associated Press that the man had lived in the southern Spanish city of Algeciras, frequenting a mosque under surveillance there.

The AP also reported that an official linked to Spain's anti-terrorism unit said that the Moroccan lived in Spain until 2014, then moved to France, travelled to Syria, and then returned to France.

A French official close to the investigation said the suspect was spotted in Berlin on May 10, headed to Turkey and French investigators informed their Spanish colleagues. On May 21 the Spaniards said he no longer lived in Spain, but in Belgium.

The French newspaper Le Voix du Nord, citing security sources, reported Saturday that the train gunman was spotted in Germany on a flight headed to Turkey in May and was thought to have visited Syria, Reuters reported.

The newspaper also said the man may have had connections to a group involved in a suspected Islamist shooting in Belgium in January, the Reuters report said.

The investigation into the incident is being led by French counter-terrorism police, according to the Paris prosecutor's office.

The Belgian federal prosecutor's office has also opened its own investigation on the grounds that the gunman had boarded the train in Brussels, said spokesman Eric Van der Sypt.

The gunman had an automatic handgun and extra ammunition clips, as well as the Kalashnikov. He was also armed with a box cutter knife, which officials say he used to stab Air Force serviceman Spencer Stone when Stone and the other passengers overpowered him and took away his gun. Stone was transferred Saturday to a larger hospital in northern France.

Stone, of Carmichael, Calif., subdued the gunman with the help of childhood friends Anthony Sadler, a senior at Sacramento State University, and Alek Skarlato, a National Guardsman from Roseburg, Ore.

President Obama spoke to Stone and the other two Americans on Saturday, commending and congratulating them for their courage and quick action.

The Belgian government said Saturday it has beefed up security on trains as a result of what happened in Arras.