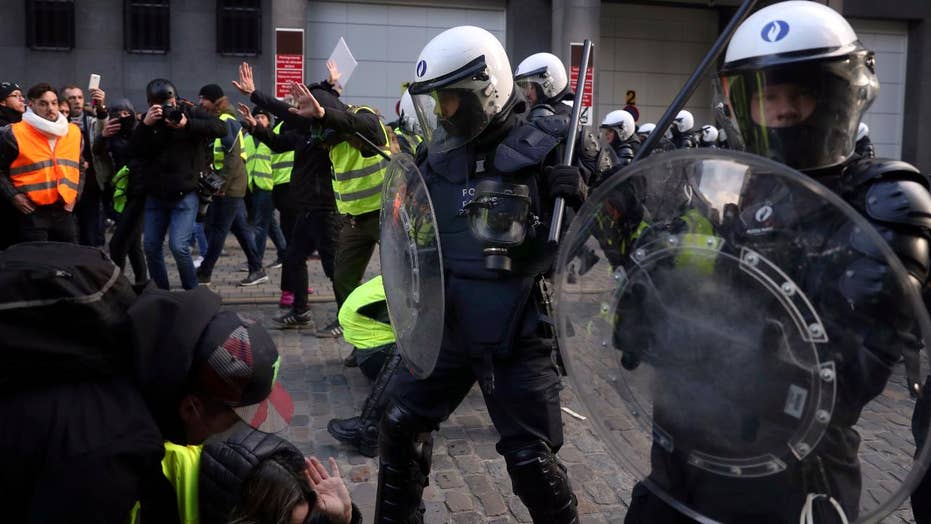 Paris riots being called the worst in a decade; Trace Gallagher reports.

French Yellow Vest protesters hit the streets to demonstrate against President Emmanuel Macron on Saturday for the 18th straight weekend and clashed with riot police, prompting the use of tear gas and a water cannon to disperse the agitators.

At least 100 people were arrested by midmorning in Paris. Authorities, fearing a possible uptick in protester numbers and mayhem, deployed additional forces and closed a number of streets in the capital.

The Yellow Vests, meanwhile, hoped that the latest protest will reignite the movement that is losing popularity every week. Yet as the number of protesters dwindled, violence increased. 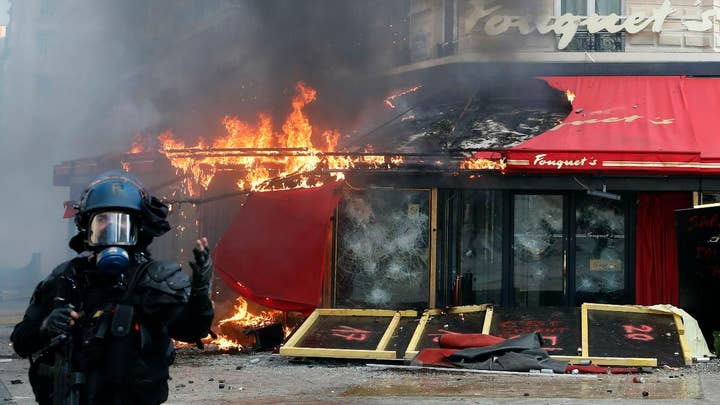 Protesters threw smoke bombs and other objects at officers along the Champs-Elysees and hit the windows of a police van, echoing the instances of rioting last year, at the peak of the protests. The police then unleashed the water cannon on protesters clustered between two stores, while a burning vehicle was spotted in the neighborhood nearby.

A threatening fire targeted a bank on the ground floor of a seven-story residential building, prompting the rescue of a mother and her child and the evacuation of the area. Eleven people, including two firefighters, sustained light injuries.

The Yellow Vest movement has rocked France since November 2018, when hundreds of thousands of people took to the streets demanding President Emmanuel Macron’s resignation.

Late last year, in an effort to quell protests, Macron called for three months of national debate on economic reforms.

EMMANUEL MACRON URGES EUROPE TO REJECT NATIONALISM AHEAD OF EU ELECTIONS, CALLS FOR ‘RETHINK’ ON MIGRATION

He addressed the country in December, promising to speed up tax relief and urging companies to give bonuses to workers. Macron also reiterated his promise to raise the minimum wage and said the government would scrap a planned tax hike on pensioners.

The movement began to gradually lose steam. Earlier this month, only around 40,000 people protested across the whole of France, with about 4,000 in Paris, compared with hundreds of thousands last year.

This weekend’s protest marked the end of Macron’s “Great National Debate,” which was organized to address the protesters’ needs.

But even as Macron made a number of concessions to the protest group, many remain skeptical of his presidency and continue to believe that he favors the rich and businesses at the expense of the rest of the public.