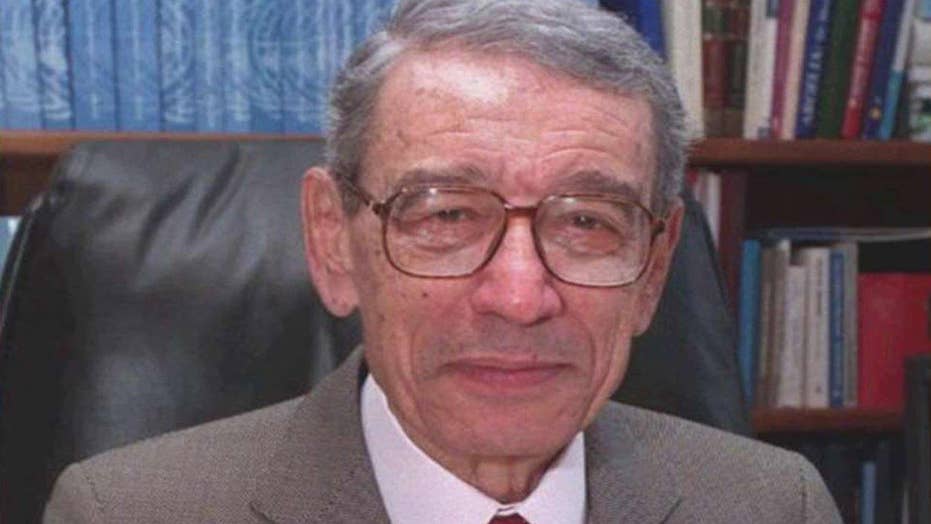 Former U.N. Secretary-General Boutros Boutros-Ghali, a veteran Egyptian diplomat who helped negotiate his country's landmark peace deal with Israel but then clashed with the United States when he served a single term as U.N. secretary-general, died Tuesday, the U.N. Security Council announced.

Boutros-Ghali, who was 93, died in a Cairo hospital, Egyptian media reported.

The Egyptian served one five-year term as U.N. chief between 1992 and 1996. The Security Council held a one-minute moment of silence Tuesday after his death was announced by Venezuela's U.N. Ambassador Rafael Ramirez, the current council president, Reuters reports.

Egyptian President Abdel Fattah el-Sisi reportedly called Boutros-Ghali on Thursday to thank him for his work on behalf of Egypt and to wish him a speedy recovery.

As Egypt's Minister of State for Foreign Affairs, Boutros Boutros-Ghali was one of the architects of the Camp David Accords that led to peace between Egypt and Israel. A Coptic Christian, he incurred wrath from Arab nationalists and Islamists for his policies.

Boutros-Ghali served as United Nations Secretary General from 1992 to 1996, a time of great upheaval from the break-ups of the former Soviet Union and Yugoslavia to the Rwandan genocide. The Clinton administration vetoed Boutrous-Ghali's attempt at a second term, a move the former Secretary-General blamed in his autobiography on friction with the U.S. over NATO bombing of Serbs and U.N. reform. These differences became debate topics during the 1996 U.S. presidential election.

He was the first U.N. chief from the African continent, and the only secretary-general to serve a single term. He was replaced by Ghanaian Kofi Annan.

Boutros-Ghali was admitted to a Cairo hospital after suffering a broken pelvis, the Al-Ahram newspaper reported on Thursday.

Boutros-Ghali's five years in the United Nations remain controversial. Some see him as seeking to establish the U.N.'s independence from the world superpower, the United States. Others blame him for misjudgments in the failures to prevent genocides and mismanagement of reform in the world body.

In his farewell speech to the U.N., Boutros-Ghali said he had thought when he took the post that the time was right for the United Nations to play an effective role in a world no longer divided into warring Cold War camps.

"But the middle years of this half decade were deeply troubled," he said. "Disillusion set in."

In a 2005 interview with The Associated Press, Boutros-Ghali called the 1994 massacre in Rwanda -- in which half a million Tutsis and moderate Hutus were killed in 100 days -- "my worst failure at the United Nations."

But he blamed the United States, Britain, France and Belgium for paralyzing action by setting impossible conditions for intervention. Clinton and other world leaders were opposed to taking strong action to beef up U.N. peacekeepers in the tiny Central African nation or intervening to stop the massacres.

"The concept of peacekeeping was turned on its head and worsened by the serious gap between mandates and resources," he told the AP.

Boutros-Ghali also came under fire for the July 1995 Serb slaughter of 8,000 Muslims in the U.N.-declared "safe zone" of Srebrenica in eastern Bosnia just before the end of the war.

In 1999, families of the victims listed Boutros-Ghali as one of the international officials they wanted to sue for responsibility in the deaths.

His legacy was also stained in investigations into corruption in the U.N. oil-for-food program for Iraq, which he played a large role in creating. Three suspects in the probe were linked to Boutros-Ghali either by family relationship or friendship.

His cousin, Fakhry Abdelnour, is the head of an oil company called AMEP, which was accused of getting oil concessions through the executive director of the oil-for-food program, Benon Sevan.

Boutros-Ghali frequently took vocal stances that angered the Clinton administration -- such as his strong criticism of Israel after the 1996 shelling of U.N. camp in Lebanon that killed some 100 refugees.

In writings after leaving the U.N., he accused Washington of using the world body for its own political purposes and said U.S. officials often tried to directly control his actions.

He wrote in his 1999 book "Unvanquished" that he "mistakenly assumed that the great powers, especially the United States, also trained their representatives in diplomacy and accepted the value of it. But the Roman Empire had no need for diplomacy. Neither does the United States."

His opponents, in turn, accused him of being too sluggish in pushing U.N. reforms. Boutros-Ghali blamed slowness in reform on the lack of money and pointed out that the United States was $1.4 billion in arrears on payments.

Noted for his dignified bearing and Old World style, Boutros-Ghali was the son of one of Egypt's most important Coptic Christian families. His grandfather, Boutros Ghali Pasha, was Egypt's prime minister from 1908 to 1910.

Born Nov. 14, 1922, Boutros-Ghali studied in Cairo and Paris and became an academic, specialized in international law.

In 1977, then-Egyptian President Anwar Sadat named him minister of state without portfolio, shortly before Sadat's landmark visit to Israel to launch peace negotiations.

Sadat's rapprochement with Israel brought harsh criticism from across Egypt's political spectrum. His foreign minister, Ismail Fahmi, resigned in protest at normalization with Israel. So Sadat turned to Boutros-Ghali, naming him acting foreign minister and minister of state for foreign affairs.

Boutros-Ghali played a major role in subsequent negotiations that produced the Camp David peace framework agreements in September 1978 and the Egyptian-Israeli peace treaty in March 1979, the first such between an Arab state and Israel.

President Hosni Mubarak, who succeeded Sadat in October 1981, kept Boutros-Ghali in the same post. But Boutros-Ghlai was never promoted to the post of foreign minister because it was considered too controversial to have a Christian in the key post of a Muslim majority country.

After leaving the United Nations, Boutros-Ghali served from 1998 to 2002 as secretary-general of La Francophonie -- a grouping of French-speaking nations. In 2004, he was named the president of Egypt's new human rights council, a body created by Mubarak amid U.S. pressure on Arab nations to adopt political and democratic reforms.

He was married to Lea, an Egyptian Jew. They had no children.