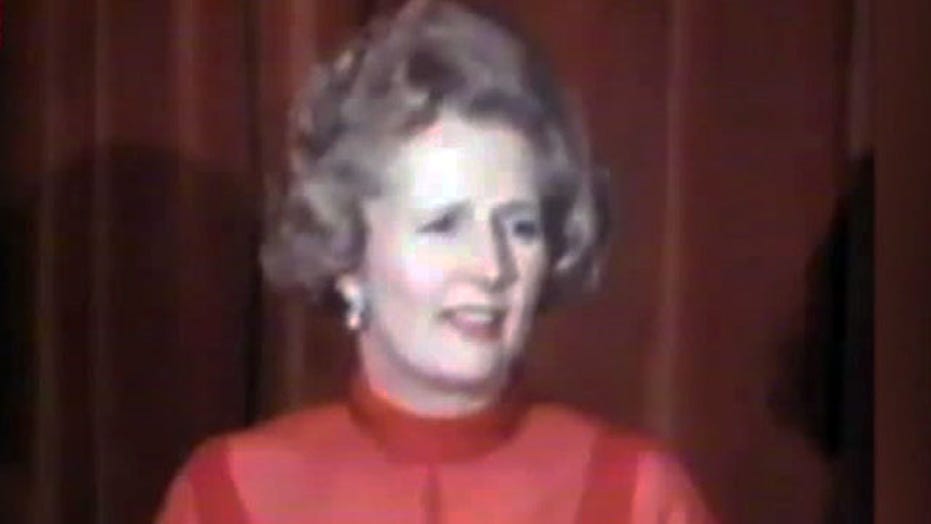 Margaret Thatcher in her own words

Former British Prime Minister Margaret Thatcher, an outspoken woman known to many as "The Iron Lady," has died at 87 after suffering a stroke.

"It is with great sadness that Mark and Carol Thatcher announced that their mother Baroness Thatcher died peacefully following a stroke this morning,” Thatcher spokesperson Lord Bell said in a statement.

Thatcher led Britain's Conservatives to three election victories from 1979 to 1990, the longest continuous period in office by a British prime minister since the early 19th century. Alongside former U.S. President Ronald Reagan, Thatcher battled against communism and saw the Berlin Wall get torn down in 1989.

"We have lost a great leader, a great prime minister and a great Briton,'' Cameron said in a statement.

Tony Blair, a former British prime minister, said Thatcher had a vast impact on the world.

"Very few leaders get to change not only the political  landscape of their country but of the world," he said. "Margaret was such a leader."

"Prime Minister Thatcher is a great example of strength and character, and a great ally who strengthened the special relationship between the United Kingdom and the United States," Bush said in a statement.

Buckingham Palace said Queen Elizabeth II was sad to hear the news of Thatcher's passing, adding that she would be sending a private message of sympathy to the family today.

Downing Street said the Queen has authorized a ceremonial funeral — a step short of a state funeral — to be held at St. Paul's Cathedral.

It said the funeral will be attended by a "wide and diverse range of people," and the service will be followed by a private cremation. But it did not provide further details on the timing of the service, saying only that the arrangement are "in line with the wishes" of Thatcher's family.

During 11 bruising years as prime minister, Thatcher transformed her country by a ruthless dedication to free markets and infuriated European allies. She transferred large chunks of the economy from the state hands to private ownership.

"The problem with socialism is that eventually you run out of other people's money," she once said, according to Reuters.

Thatcher retired from public engagements in 2002 following a series of small strokes, and was only occasionally seen in public since then.

To her fervent admirers, battling Maggie was an icon, a national savior who ended Britain's post-World War II cycle of confrontation and decline -- eclipsed as a 20th-century British leader only by Winston Churchill.

Her vehement critics, however, saw her as a bellicose figure at home and abroad, a destroyer of industries and, with it, a way of life.

She was a sharply divisive figure even within her Conservative Party, especially on the issue of European integration; the party declined into a bickering shambles after she fell from power.

Between 1979 and 1990, her governments crushed the once-mighty labor unions, defeated Argentina in the Falkland Islands war and preached military readiness to the Western alliance.

"We have raised Britain in the respect of the world from what it was -- broke, bankrupt, unwilling to defend itself properly," Thatcher declared in 1987. "We have, I think, transformed Britain."

Thatcher's years in power overlapped Reagan's two terms as president, and her support for the American leader and her agreement with his world view never wavered. It was a political union of opposites: Thatcher had none of Reagan's disarming charm, and he lacked her appetite for hard work and devotion to detail.

The grocer's daughter became Europe's first female prime minister in 1979, four years after the Conservative Party surprised itself by making her its leader. Typically, she jumped into the leadership race while more prominent male colleagues dithered, and then proved unstoppable.

She loved the jokes claiming she beat her all-male Cabinet ministers with her handbag, and reveled in being the "Iron Lady," a nickname coined by the Soviet press.

At home, she sold huge, loss-making state-owned companies, from Jaguar to national utilities to British Airways. Many became profitable.

For the employed majority of Britons, living standards rose dramatically, but the gap widened between the well-off and the poor.

The late Peter Jenkins, a leading liberal political commentator throughout the Thatcher years, once wrote that she had "changed the political map and put her country on its feet again."

"She did all this with ruthlessness and much injustice and at a high cost in human misery, but she did it," he said.

Margaret Hilda Roberts was born Oct. 13, 1925, in the central England town of Grantham, the younger daughter of Beatrice and Alfred Roberts, a strict Methodist and pillar of the local community. Throughout her life, she espoused his values of hard work and thrift.

She earned a science degree at Oxford University, working for a time as a research chemist before switching to law and becoming a barrister -- a lawyer who argues cases in court.

In 1951, she married Denis Thatcher, a wealthy businessman 11 years her senior. Their children, twins Mark and Carol, were born in 1953.

She called Denis, who died June 26, 2003, her rock and her great support. He paid for the nannies and private boarding schools which gave her the freedom to make a political career.

Thatcher was elected to Parliament in 1959, the youngest of 25 women in the House of Commons, representing Finchley in north London.

As education secretary in the 1970-74 government of Prime Minister Edward Heath, newspapers dubbed her "Thatcher Milk Snatcher" when she ended free milk for schoolchildren.

Her big chance came in 1975 when the Tories dumped Heath. Thus began what a biographer, the late Hugo Young, called "an era in which an ordinary politician, laboring under many disadvantages, grew into an international figure who did some extraordinary things to her country."

She marked her course clearly. "A man's right to work as he will, to spend what he earns, to own property, to have the state as servant and not as master, they are the essence of a free economy, and on that freedom all our other freedoms depend," she said in a speech in 1975.

Her ascension to prime minister came in May 1979 on a wave of popular disgust at high inflation, garbage-strewn streets and a series of public sector strikes under the Labour Party government of James Callaghan.

When her popularity was at a low ebb in 1982, Argentina invaded the Falklands Islands. Spurning negotiation, she dispatched warships to the remote south Atlantic archipelago.

"Rejoice! Rejoice!" she exclaimed after British Marines retook South Georgia island. The surge of national pride that followed Britain's victory carried her triumphantly through the 1983 national elections, a victory aided by a Labour Party torn apart by years of infighting.

Even detractors admired her courage.

After surviving an Irish Republican Army bomb that killed five people at the Conservatives' 1984 convention, Thatcher brushed off the dust of her shattered Brighton hotel suite and, hours later, made her keynote speech on cue.

She never faltered, in word or deed, in her support of the United States. In 1986, she allowed U.S. warplanes to fly from British bases to bomb Libya. She sent ships, tanks and troops to fight against Iraq in the first Gulf War, but had resigned before the battle was joined in 1991.

Thatcher was one of the first to spot Mikhail Gorbachev as a promising leader of the Soviet Union. "I like Mr. Gorbachev, we can do business together," she said after their first meeting in Britain in 1984.

In her memoirs, Thatcher said of Gorbachev: "I spotted him because I was searching for someone like him. And I was confident that such a person could exist, even within that totalitarian structure, because I believed that the spirit of the individual could never ultimately be crushed in the Kremlin any more than in the Gulag."

Thatcher sat next to Gorbachev at Reagan's funeral, and in a taped eulogy spoke of the personal dynamics of the era of "perestroika."

"I cannot imagine how any diplomat, or any dramatist, could improve on (Reagan's) words to Mikhail Gorbachev at the Geneva summit: `Let me tell you why it is we distrust you.' Those words are candid and tough and they cannot have been easy to hear. But they are also a clear invitation to a new beginning and a new relationship that would be rooted in trust," she said.

Though Thatcher's Conservatives won re-election in 1987, the fall of the Iron Curtain deprived her of a key role as the scourge of communism, and she could appear out of touch with the times. She opposed the unification of Germany in tones that suggested the Nazi era was not forgiven, and her opposition to the growing influence of the European Union became more strident and nationalistic.

Thatcher had often seemed at odds with her own government's policy of developing European integration, and the issue became her downfall in 1990 when Conservative legislators were feeling a panic over the government's low opinion poll ratings.

In November of that year, she fell short of winning re-election as Tory leader on the first ballot of Conservative legislators. "I fight on. I fight to win," she said. But, persuaded that the party had  abandoned her, she resigned.

"The people who brought about that incident are responsible for the biggest defeat the Conservative Party has ever had," she said after Tony Blair's Labour Party ended 18 years of Tory rule in 1997. "It was catastrophic for me because I got things right."

Blair's "New Labour" government, ironically, became part of her formidable legacy. The once-socialist Labourites moved to the center with echoes of Thatcherism -- from preserving Britain's nuclear deterrent to telling single mothers on welfare to find work.

Out of power, Lady Thatcher, named a baroness in 1992, made regular and lucrative U.S. lecture tours, and founded the Thatcher Foundation to spread her free-market philosophy.

Europe remained an obsession. In her book, "Statecraft," published in 2002, she described the European Union as "perhaps the greatest folly of the modern era" and wrote that most of the 20th century's greatest problems -- including Nazism and Marxism -- originated on the continent.

Thatcher hardly ever admitted any regrets, but in a 1998 interview with the British magazine Saga she said she rarely saw her children or grandchildren.

"It's very sad," she said. "It's something that I thought would never happen."

Was it the price of power?

Click to view historical documents on the Thatcher period, from the Margaret Thatcher Foundation.