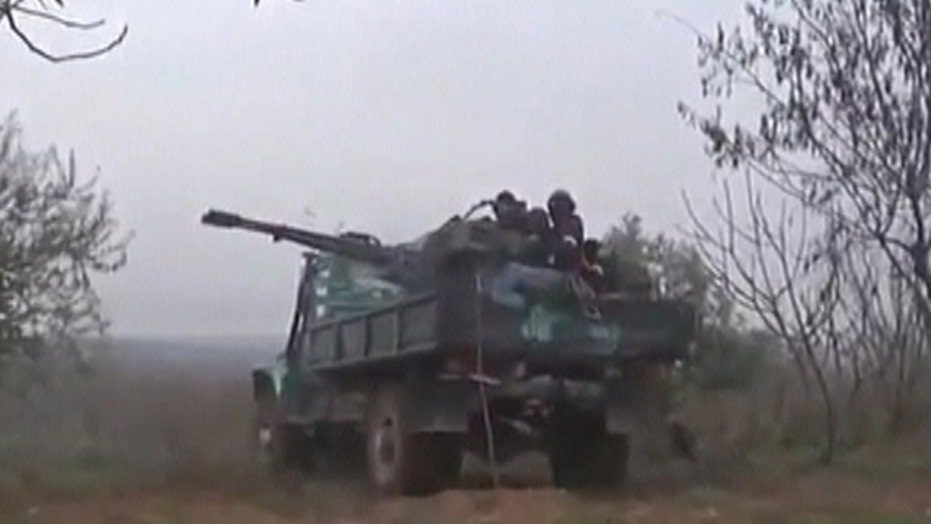 New fighting rages in Syria near strategic air base

BEIRUT – Syrian troops and rebels fought intense battles Thursday around a strategic air base in the country's north and a suburb of the capital that government forces have been trying to capture since last month, activists and state media said.

The fighting is part of the escalating violence in a Syrian conflict that the United Nations estimates has killed more than 60,000 people since the revolt against President Bashar Assad began in March 2011.

The Britain-based Syrian Observatory for Human Rights said rebels stormed parts of the Taftanaz air base in the northwestern province of Idlib before withdrawing. The state-run SANA news agency said government forces protecting the base "repelled the terrorists' attempt to attack the airport" and inflicted heavy losses.

The Observatory said rebels resumed their assault early Thursday in an attempt to capture the base, which has resisted several opposition efforts to take the facility in recent months.

The rebels have been pursuing a strategy of attacking airports and military airfields, targeting five air bases in Idlib and the nearby province of Aleppo, trying to chip away at the government's air power, which poses the biggest obstacle to advances by opposition fighters.

With its troops struggling to make headway -- let alone gain ground -- against the rebels in the field, the government has increasingly relied on its warplanes and helicopters to target opposition forces.

The Observatory and the Local Coordination Committees, another activists group, reported clashes, air raids and shelling in several suburbs of the capital Damascus, including Daraya, which the regime has been trying to capture from hundreds of opposition fighters for weeks.

The pro-government al-Watan daily said Thursday that the army had destroyed rebel strongholds in Daraya and inflicted heavy losses, adding that the area would be declared safe later in the day.

Daraya lies in a strategic location, and a government takeover there would provide a boost to the regime's defense of Damascus.

The suburb is just a few kilometers (miles) from the strategic military air base of Mazzeh in a western neighborhood of the capital. It borders the Kfar Sousseh neighborhood that is home to the government headquarters, the General Security intelligence agency head office and the Interior Ministry, which was the target of a recent suicide attack that wounded the interior minister.

Daraya is also less than six miles from the People's Palace -- one of three palaces in the capital used by Assad.

Al-Watan said thousands of rebel fighters from the extremists Jabhat al-Nusra group have holed up in Daraya in preparation to storm Damascus. Jabhat al-Nusra, which has been branded a terrorist organization by the U.S. and which Washington claims is affiliated with Al Qaeda, has been among the most effective fighting force on the rebel side in the battle to oust Assad.

The Observatory reported that rebels attacked a power station in the central province of Hama. Syrian TV said troops protecting the station repelled the attackers.

The Observatory and the Local Coordination Committees reported fighting and shelling in different areas of the southern province of Daraa, which borders Jordan. Daraa was the region where the anti-Assad uprising began in March 2011.

In Jordan, the U.N. refugee agency said Thursday that there has been a steady increase of Syrians fleeing into Jordan over the past two weeks.

UNHCR reporting officer Danita Topcagic said the past three days saw an average of 1,200-1,300 crossing the border mainly due to fighting and skyrocketing prices of basic commodities.

Topcagic said refugees told UNHCR that the Free Syrian Army was also encouraging them to flee due to increased fighting in the area. Also markets and shops are often shuttered making it difficult for people to find food, electricity and water supplies are intermittent and hospitals in many places have shut.

She said that in mid-December a daily average of 757 Syrians had crossed Jordan's northern frontier, while in November the average number daily was around 600.

Syria's civil war has turned more than half a million Syrians into refugees. Most of them have found safe haven in Jordan, Lebanon and Turkey.