Joshua Boyle arrives at court in Ottawa on Monday, March 25, 2019. Boyle is on trial in Canada, accused of repeatedly assaulting his wife. He faces 19 charges, including sexual assault. A partial gag order was lifted at the trial, revealing that all but one of 19 charges relate to his American wife, Caitlan Coleman of Stewartstown, Pa. Boyle and his wife were taken hostage in 2012 by a Taliban-linked group while on a backpacking trip in Afghanistan. The couple had three children during their five years in captivity. The family was rescued in 2017 by Pakistani forces. (Sean Kilpatrick/The Canadian Press via AP)

A Canadian man who with his wife was held hostage by the Taliban for five years has been accused of repeatedly assaulting her before, during and after their captivity, including tying her ankles and wrists with rope and forcing her to have sex.

Joshua Boyle, 35, is facing 19 charges, including sexual assault, after his estranged wife Caitlan Coleman, 33, alleged that she suffered at his hands. Court records show that one charge is related to another person, whose identity has not been divulged due to a court order.

Both Boyle and Coleman were captured by a Taliban-linked group in 2012 while on a backpacking trip in Afghanistan. During their five years in captivity, she gave birth to three children. The family was freed in 2017 by Pakistani forces.

Caitlan Coleman, seen with husband Joshua Boyle and their children, broke her silence after being rescued from captivity. (AP, File)

Coleman testified on Friday that during their captivity Boyle was controlling. His behavior “was just like my captors,” she told the court, according to the Guardian.

“I was never to disagree with him, even on small things,” she said. “In the past, he made it clear he didn’t feel any guilt hurting me.”

She described behavior by Boyle that she said led to a violent assault after they returned to Canada, in which he demanded sex, then hit her after she refused.

“Josh told me to get on the bed. He took ropes he kept in a bag … and he started to tie my hands and legs,” she said, adding that he sexually assaulted her and refused to release her. “He said he couldn’t trust me, so he wasn’t going to untie me.”

Boyle was arrested in December 2017 and pleaded not guilty to all charges. He was released from jail last June with strict bail conditions that include living with his parents in Smiths Falls, Ontario, and wearing a GPS ankle bracelet that tracks his movements. 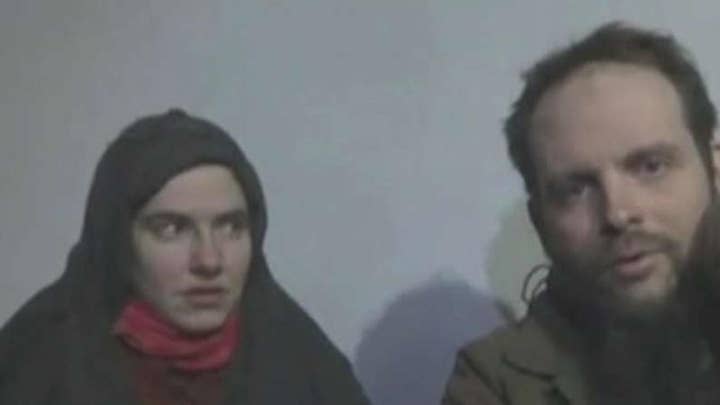 Coleman previously testified that she met Boyle when she was 16 and that he was her first kiss, but he soon became physically abusive and controlling.

She said that during their captivity, Boyle would spank, bite, and choke her as forms of punishment, and sometimes forced her to stay in a bathroom stall for hours because he couldn’t stand her, the newspaper reported.

Coleman said Boyle continued the abuse and controlling behavior after they returned to Canada.

She told the court earlier this week that Boyle forced her to take powerful sleeping medication. “He stood in the bathroom and watched me take them that time … I took them because I knew that if I didn’t he would hit me harder.”

The trial is expected to last eight weeks.