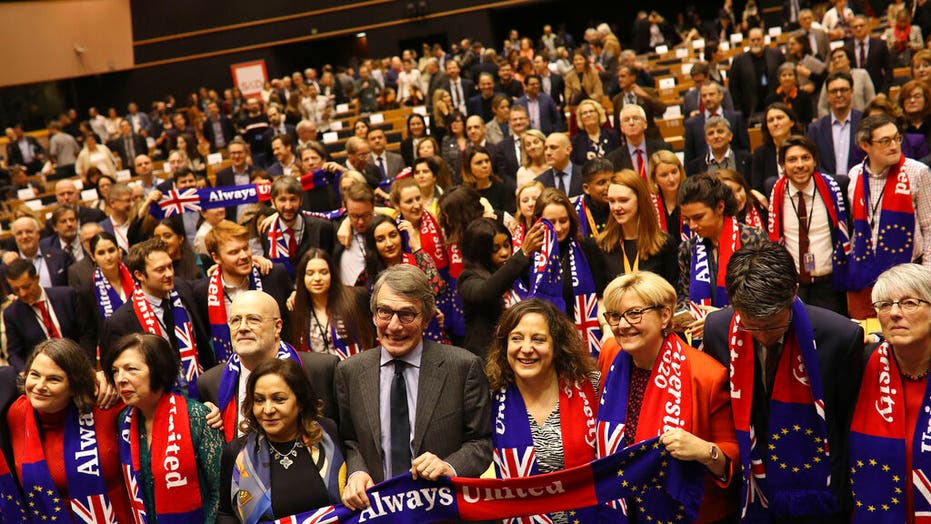 European lawmakers on Wednesday overwhelmingly backed the terms of Britain’s exit from the European Union, paving the way for a full departure by Friday.

In the final major decision of the four-year saga, the European Parliament voted 621 to 49 in favor of the Brexit deal that British Prime Minister Boris Johnson negotiated with the other 27 EU leaders late last year.

European Parliament President David Sassoli, center, stands with other British MEP's and members of the political group Socialist and Democrats as they participate in a ceremony prior to the vote on the UK's withdrawal from the EU at the European Parliament in Brussels, Wednesday, Jan. 29, 2020. (AP)

After Britain's departure on Friday, the U.K. will remain within the EU's economic arrangements until the end of the year though it won't have a say in policy as it will no longer be a member of the EU.

"We will always love you and you will never be far," said EU Commission President Ursula von der Leyen on a day when some legislators were moved to tears.

With only two days to spare, legislators approved the withdrawal agreement that will end Britain’s 47-year membership. At the same time, the vote cut the 73 U.K. parliamentarians from the 751-seat legislature.

Negotiations will now move on how to cooperate in the future. Britain is seeking to thrash out a comprehensive trade deal before the end of the year – a timetable viewed by many observers of trade discussions as ambitious.

The EU has said such a timespan is far too short and fears remain that a chaotic exit is still ahead if the transition ends without any agreement in place.

"We will not yield to any pressure," French President Emmanuel Macron said. "The priority is to define, in the short, medium and long term the interests of the European Union and to preserve them."

Even though the European Commission's task force, led by Michel Barnier, is negotiating on the EU's behalf, the impact of major nations like France and Germany on those talks is important.

De Montchalin said that unless Britain asks to extend the transition period before the summer, both sides will be facing a cliff-edge scenario by the end of the year where borders could be closed, tariffs imposed and rules changed overnight, to the detriment of smooth trade.