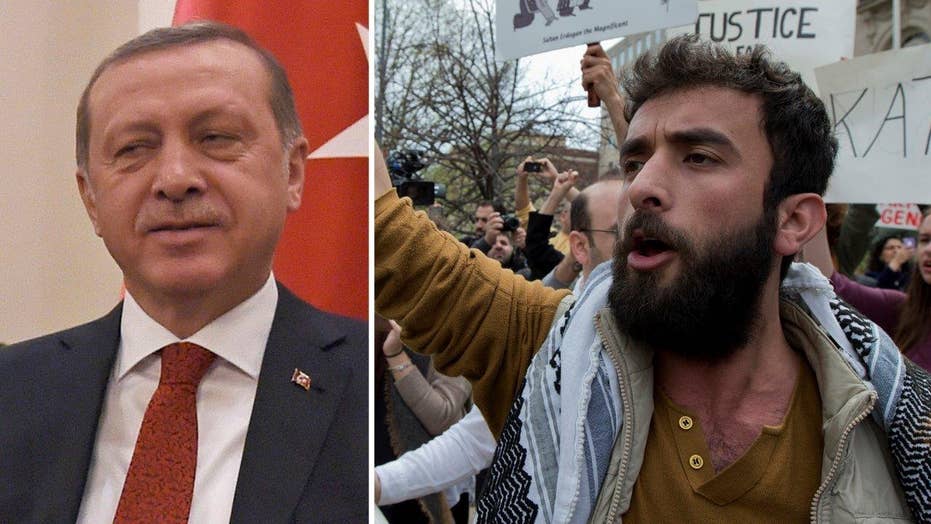 Protests spin out of control during Erdogan's DC visit

Among the mounting headaches for Turkish President Tayyip Erdogan – in Washington this week for a visit that notably does not include a formal sitdown with President Obama – is a 74-year-old Muslim cleric quietly living on a private compound in the Pocono Mountains of Pennsylvania.

Fethullah Gulen, a one-time Erdogan ally, is the head of a faith-based social movement that boasts a global following, has deep roots in Turkish society, and cultivates notable influence in the U.S. education through a network of roughly 150 secular charter schools.

But a nasty split between the two over Erdogan’s years-long crackdown on domestic dissent and Turkey’s once-open media landscape has now spread to the United States, and threatens to further destabilize an already frayed alliance.

“It is Erdogan’s way of fighting the corruption without obviously confronting the issue of corruption.”

More than 2,000 Gulen supporters have been arrested in Turkey on various charges since the 2013 split, though many were later released. And Turkish authorities recently seized control of one of Turkey’s largest newspapers, Zaman, which was associated with Gulen.

But what’s relatively new to many Americans only now hearing about Gulen is a high-profile, multimillion-dollar public relations and legal effort by the Erdogan government to extradite him to Turkey, and raise myriad questions about the propriety of the charter schools.

Erdogan has cracked down on the media in Turkey, but has been unable to strike at his arch nemesis in the U.S. (Associated Press)

“This is a really dangerous group,” charged Robert Amsterdam, a lawyer whose firm Erdogan hired to launch an international investigation of the Gulen organization - particularly its business and political dealings in the U.S. “When it comes to these charter schools and Gulen, nothing is transparent.”

Gulen cloisters himself on the grounds of an Islamic retreat owned by Turkish Americans in Saylorsburg, Pa., and rarely gives interviews to news media. But his sermons appear online. He preaches what many consider a moderate form of Islam. And he has regularly and stridently condemned jihadist terror attacks – much more so than Erdogan, say the president’s critics – and typically advocates interfaith dialogue.

Turkish Islamic preacher Fethullah Gulen, pictured at his residence in Saylorsburg, Pa., is charged in Turkey with plotting to overthrow the government. (Associated Press)

Gulen’s Hizmet movment -- meaning “service” in Turkish -- is marked by business savvy and a successful push to build political connections. The movement is believed to be worth billions of dollars.

Hendrick disputed Amsterdam’s argument the organization is dangerous. But in Erdogan’s view, Gulen is an arch-enemy of the state, whose followers represent a seditious “parallel state” within Turkey.

Erdogan claims the school network funnels money back to Turkey to fund Gulen's efforts to overthrow his government.

Gulen is specifically accused of scheming to have his followers infiltrate the Turkish government for the purpose of overthrowing Erdogan’s ruling Justice and Development Party, known by its Turkish acronym as the AKP. Gulen also faces espionage charges, and two trials are now being held in absentia.

“Those accusations are laughable; they have no evidence,” said Y. Alp Aslandogan, executive director of the Alliance for Shared Values, a New York-based organization that promotes Gulen’s teachings.

Several scholars in the U.S. interviewed by FoxNews.com also defended Gulen and criticized the Turkish prosecution of him, citing Erdogan’s aggressive crackdown.

“There is no evidence that I am aware of to support the idea that the movement is at all violent or terroristic,” Zeki Saritoprak, professor of Islamic studies at John Carroll University in Ohio, told Fox News. “Allegations to the contrary are absurd.”

Another scholar, A. Kadir Yildirim, of Rice University’s Baker Institute for Public Policy, agreed. “All opposition groups, including the Gulen Movement, are being targeted by President Erdogan,” he said, listing Kurds, non-Muslim minorities and liberals as other victims of Erdogan’s autocratic tilt.

Professor Henri Barkey, director of the Middle East Program at the Woodrow Wilson International Center for Scholars and a longtime expert on Turkey, said Gulen supporters have been scapegoated to draw attention from Turkey’s complex domestic and foreign policy problems -- which range from increased internal unrest and a Kurdish insurgency to Russia’s menacing influence in Syria and Turkey’s fraying alliance with the U.S. over – among other factors -- the Obama administration’s support for Kurdish militias in the battle against ISIS.

“It is convenient for the government to blame the Gulenists for everything,” Barkey said. “It is Erdogan’s way of fighting the corruption without obviously confronting the issue of corruption.”

One scholar argued for a more careful approach. Abraham Wagner, a lecturer at Columbia Law School and a board member at the Center for Advanced Studies on Terrorism, said the next U.S. administration should pay close attention to Hizmet activities in America.

“They are trying to undermine the (Turkish) government … We have to be aware of what they are and how they are operating,” he said. “It’s not an open and shut case. What I am urging is, let’s take a closer look at what they are doing.”

Some have done just that. A number of Gulen-affiliated schools have been investigated over accusations that include mismanagement of public funds and possible visa fraud. Amsterdam alleges the network has a history of receiving a disproportionate share of H-1B visas -- temporary non-immigrant work visas -- that allow foreign teachers to work in the U.S. He said Gulen’s U.S. charter network, however loosely organized, generates massive profits, and that “a percentage of that is going back to Turkey” and being used to foment “instability.”

Barkey said Gulen-affiliated charters aren’t necessarily engaging in illegality, but they “skirt good practices or common sense sometimes.” He said he was infuriated when he saw a recent report on the CBS program “60 Minutes” about Gulen charters that highlighted one example of a school bringing a Turkish national to the U.S. to teach English.

The Chicago Sun-Times also reported last year that the Justice Department launched an investigation into alleged misuse of federal grant money at Concept Schools, a Gulen-linked network of some 30 charters in Illinois and five other states. Federal officials did not respond to multiple inquiries from FoxNews.com, but Concept management said, through a spokeswoman, they “continue to cooperate with authorities.” To date, no one affiliated with a Gulen charter has been convicted of any criminal activity.

Amsterdam and other Hizmet critics also accused some Gulen-linked charters of targeting selected students to proselytize.

“Our investigation has uncovered that … there is a proselytizing campaign where these Turkish teachers, we are told, actually target youths in these schools -- not a lot, maybe four or five per class -- to bring them into the movement,” Amsterdam said.

When asked, Amsterdam, who reiterated many of the charges in a news conference in Washington Thursday, would not immediately provide specifics.

That charge, too, was met with skepticism by those who note Gulen schools are often highly regarded and more focused on science and technology instruction.

“Worldwide, to my knowledge, there has been no credible evidence of religious indoctrination at any school established or run by Hizmet sympathizers,” said Saritoprak.

Amsterdam vows his investigation is far from over. His efforts have thus far produced one court case -- a pending civil suit in U.S. District Court in Pennsylvania -- which alleges Gulen used a 2009 sermon to signal his followers in law enforcement in Turkey to falsely arrest three political opponents.

Gulen’s lawyer in that case, Michael Miller, argues U.S. law does not apply, and called it “an abuse of the U.S. courts to try to initiate a lawsuit like this as part of a global campaign, a political campaign, to harass Mr. Gulen.”

Meanwhile, Aslandogan and other Hizmet supporters want Americans to see through these anti-Gulen efforts, and recognize this as an international political fight led by the increasingly autocratic Erdogan.

“We are talking about a person with dictatorial ambitions in Turkey, and he is taking his battles to American shores,” Aslandogan said.