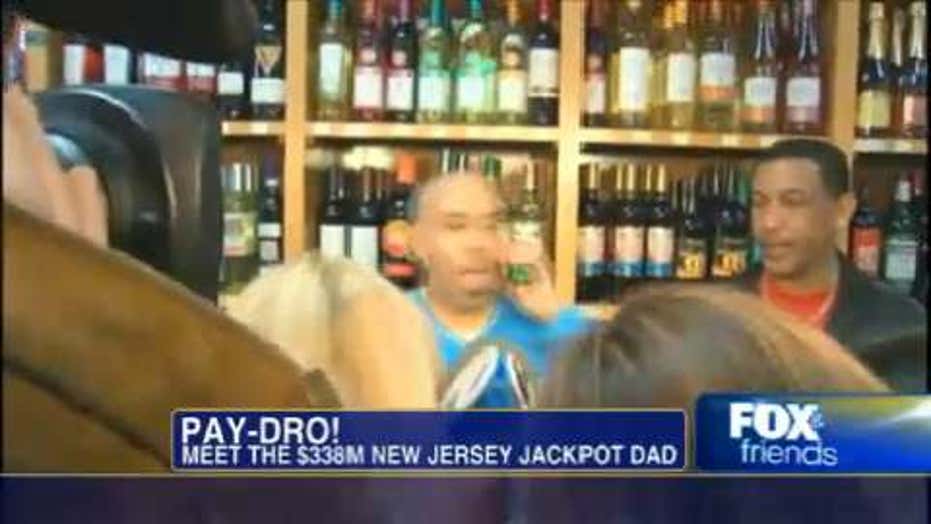 Pedro Quezada, 44, a bodega owner in Passaic, N.J. is a father of five, and bought daily lottery tickets, apparently finally hit the jackpot.

The piece of paper that just turned Pedro Quezada into a millionaire is seen as a victory not just for him and his family — it's seen as a coup for his entire immigrant community in New Jersey.

Whether they know him or have just seen him on the street, many of Quezada's neighbors see themselves as at least symbolically sharing his $338 million winning ticket. Many of these neighbors have similar stories to the 44-year-old Dominican father of five:  Hardworking, a family man, an immigrant and someone who has known hard times.

"This is super for all of us on this block," said Eladia Vazquez, who has lived across the street from Quezada's building for the past 25 years. Quezada and his family "deserve it because they are hardworking people."

After a morning of speculation as to who the lucky winner was Quezada, 44, entered Eagle Liquors store, where his ticket was sold, late Monday afternoon. The Passaic store's owner ran Quezada's ticket through the lottery machine and, as a newspaper and television outlets recorded the moment, validated that it was a winner.

Speaking with reporters in his native Spanish, Quezada expressed he was "very happy" about making the shocking discovery, saying he intends to help his family with his millions.

"I still can't believe it," his wife, Ines Sanchez, told The Record in Bergen County. "We never expected it, but thank God."

The New Jersey Lottery confirmed that the winning ticket was validated at Eagle Liquors at 4:30 p.m. Monday, but officials said they didn't yet know the winner's name.

The Quezada family's apartment sits at the end of a short dead end block that abuts a highway in Passaic, 15 miles northwest of New York City.

The block has a half-dozen three-story brick apartment buildings on each side, and Vazquez said it's a neighborhood where everyone knows everyone, including what car they drive and what parking space they use.

Alberto Liranzo, who lives two floors below Quezada, said the lottery winner has five children and owns a bodega in Passaic.

Fellow Dominican immigrant Jose Gonzalez said he barbecues and plays dominoes with Quezada in the summers in a backyard on their street.

"He sometimes would work from six in the morning to 11 at night, so I did not see him much," Gonzalez said in Spanish Monday night. "I am happy for him. ... I don't know where he is now but I imagine he will drop by to say hi to his friends."

Neighbors told The Record that the Quezada family has suffered bad luck in recent years. Two years, ago, thieves broke into their apartment and stole everything from clothing to jewelry. The year before, a fire destroyed much of their bodega, they said.

But now the family's luck has changed. And his community could not be happier to see one of their own strike it rich.

"It's a blessing for the neighborhood," resident Daphne Robinson told The Record. "It gives people hope that there is a blessing somewhere, for somebody."

No one had won the Powerball jackpot since early February, when Dave Honeywell in Virginia bought the winning ticket and elected a cash lump sum for his $217 million jackpot.

The largest Powerball jackpot ever came in at $587.5 million in November. The winning numbers were picked on two different tickets — one by a couple in Missouri and the other by an Arizona man — and the jackpot was split.

Nebraska still holds the record for the largest Powerball jackpot won on a single ticket — $365 million — by eight workers at a Lincoln meat packing plant in February 2006.

Powerball is played in 42 states, Washington, D.C., and the U.S. Virgin Islands. The chance of matching all five numbers and the Powerball number is about 1 in 175 million.