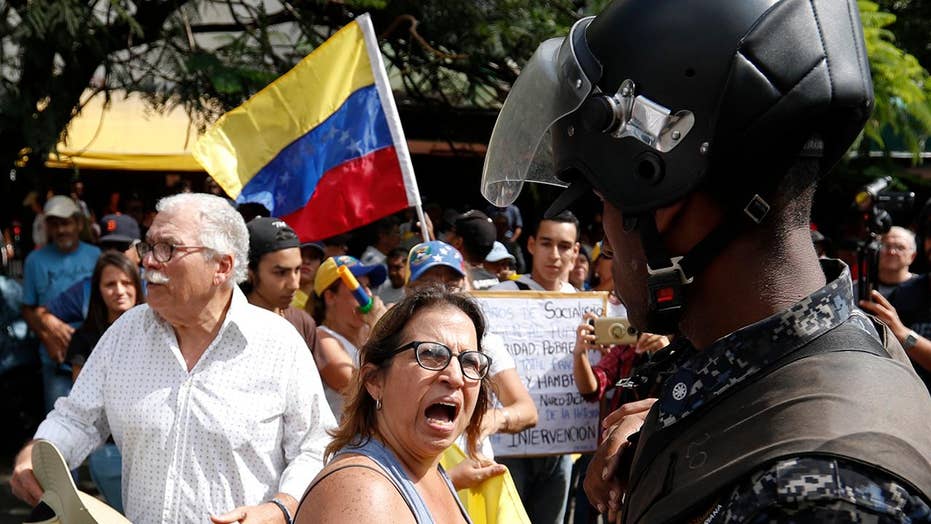 A prominent Venezuelan journalist is in the custody of the country’s intelligence agents after he was picked up after leaving work Monday, according to the National Union of Press Workers.

The union reported that Luis Carlos Diaz, a reporter for Unión Radio News in Caracas and activist for internet and press freedom, appeared near his home Tuesday morning in handcuffs while government security agents raided his home.

The union said that they took Diaz’s computers, cell phones, money, and other belongings.

Diaz told journalists and others who were outside his home that he had been arrested and beaten in detention, the union tweeted. He is reportedly being held at the notorious El Helicoide political prison.

It is the latest high-profile detention of a journalist by Venezuelan authorities, who have intensified a crackdown on the press that became routine during the administration of the late President Hugo Chavez. Human rights groups say the crackdown on both international and Venezuelan journalists has grown worse and bolder in recent weeks under the administration of President Nicolas Maduro.

“In Venezuela, the system of censorship and repression is nothing new, but in the last few months we’ve seen a significant crackdown,” Natalie Southwick, who focuses on Central and South America for the Committee to Protect Journalists, told Fox News. “We’ve seen high-profile and ongoing harassment and detention, and confiscation of equipment recently.”

Maduro’s crusade against the press came into sharp focus recently with the detention of Jorge Ramos, the star anchor of the Spanish-language television network Univision, and his crew.

After having his cell phone confiscated by Maduro’s security agents, Ramos obtained a borrowed phone and described how his tough interview with Maduro landed him in detention for a few hours. Security agents took equipment, including cell phones, from Ramos and his crew.

Daniel Garrido, a reporter for Telemundo, also a U.S.-based Spanish-language television news network, was abducted in Caracas while reporting about Ramos’ detention.

In the last week of January, there were more than a half dozen international journalists detained, usually for short periods, Southwick said.

But dozens of Venezuelan journalists – on the margins of international public awareness -- have been detained and harassed, Southwick noted.

“These cases of Jorge Ramos and international reporters have gotten lots of attention, but it’s worth emphasizing that this kind of harassment and threats are something that Venezuelan journalists face every day doing their work,” she said.

The Caracas Chronicles, for which Diaz is a contributor, said in an article published Tuesday that the government is trying to accuse the journalist and another reporter, Nelson Bocaranda, of having advance knowledge about the nationwide blackout that hit Thursday and continues, causing problems for Venezuelans, leaving them with little power, water and communications.

The outlet added that Maduro addressed the nation after Diaz went missing on Monday to say that two culprits – without naming them -- with ties to the blackout were in custody.

"Venezuelan authorities should immediately release Luis Carlos Díaz, return his confiscated equipment, and stop this absurd campaign blaming their own failures on critical journalists," the statement said. "Without electricity, much of the Venezuelan public is already deprived of access to information from TV, radio, and the internet in the midst of an emergency. Harassing and jailing journalists will only exacerbate the crisis."