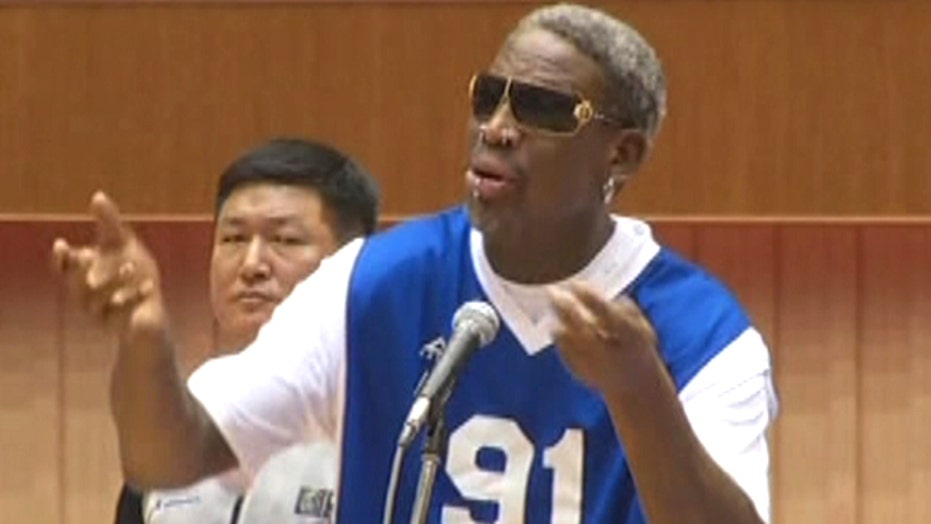 Dennis Rodman has apologized for implying that a Washington man imprisoned in North Korea may deserve to be jailed in an explosive interview during his visit to the country to celebrate the birthday of leader Kim Jong Un.

A day after the former basketball star sang "Happy Birthday" to Kim and led a squad of former NBA players in a friendly game, Rodman issued the apology through publicist Jules Feiler in an email message to The Associated Press.

"I want to apologize," Rodman said. "I take full responsibility for my actions. It had been a very stressful day. Some of my teammates were leaving because of pressure from their families and business associates. My dreams of basketball diplomacy was quickly falling apart. I had been drinking. It's not an excuse but by the time the interview happened I was upset. I was overwhelmed. It's not an excuse, it's just the truth.

Asked in a CNN satellite interview on Tuesday whether he would raise the issue of Kenneth Bae, who is being held in North Korea on charges of "anti-state" crimes, Rodman yelled in response, "I don't give a rat's ass what the hell you think."

Bae's sister, Terri Chung, said Thursday it's good to see Rodman recognize the gravity and urgency of Kenneth Bae's plight. "It's nothing he can make light or play games with."

"Kenneth's imprisonment for the past 14 months has been a devastating experience for our whole family, and then to hear Dennis Rodman, who has refused to help – and that’s his prerogative – then to have him hurl these outrageous accusations at Kenneth is just completely appalling and we were just upset and shocked," Chung said on 'On the Record.'

"I wish he would know this isn’t some sort of game, this isn’t a media circus, you know, this is about a person’s life on the line," Chung said. "And, you know, I respect that he doesn’t want to help and that’s his choice, but you know, if he’s not going to help please don’t get in the way and make harmful comments when clearly he doesn’t have any idea what’s going on."

The State Department distanced itself from Rodman and said it did not want to "dignify" his activities or comments in Pyongyang by commenting on them. But spokeswoman Jen Psaki said the department was open to speaking with Rodman on his return.

"We have not reached out to him. We've said before, if he wants to reach out to us, we're happy to hear from him and what he has to say," she told reporters.

Rodman dedicated the game to his "best friend" Kim, who along with his wife and other senior officials and their wives watched from a special seating area. The capacity crowd of about 14,000 at the Pyongyang Indoor Stadium clapped loudly as Rodman sang a verse from the birthday song.

Rodman said he was honored to be able to play the game in the North Korean capital and called the event "historic." Some members of the U.S. Congress, the NBA and human rights groups, however, say he has become a public relations tool for North Korea's government.

The government's poor human rights record and its threats to use nuclear weapons against rival South Korea and the United States have kept it a pariah state. Kim shocked the world in December by having his uncle, once considered his mentor, executed after being accused of a litany of crimes including corruption, womanizing, drug abuse and attempting to seize power.

The 52-year-old Rodman has refused to address those concerns while continuing to forge a relationship with Kim, whose age has never been officially disclosed. The government did not say how old he turned Wednesday but he is believed to be in his early 30s.

At the start of the game, Rodman sang "Happy Birthday" to Kim, who was seated above in the stands at the stadium, and then bowed deeply as North Korean players clapped.

To keep it friendly, the Americans played against the North Koreans in the first half, but split up and merged teams for the second half.

The North Korean team scored 47 points to 39 for the Americans before the teams were mixed. Rodman played only in the first half and then sat next to Kim during the second half.

"A lot of people have expressed different views about me and your leader, your marshal, and I take that as a compliment," Rodman told the crowd. "Yes, he is a great leader, he provides for his people here in this country and thank God the people here love the marshal."

Rodman is the highest-profile American to meet Kim. He has carefully avoided getting involved in overtly political activities, saying that he is not a statesman and instead is seeking only to build cultural connections with the North through basketball that may help improve relations between Pyongyang and Washington.

The game is a new milestone in Rodman's unusual relationship with Kim, who inherited power after the death of his father in late 2011 and rarely meets with foreigners. He remains a mystery to much of the outside world and until recently, his birthday was also not widely known, though it was quietly observed elsewhere around the capital Wednesday.