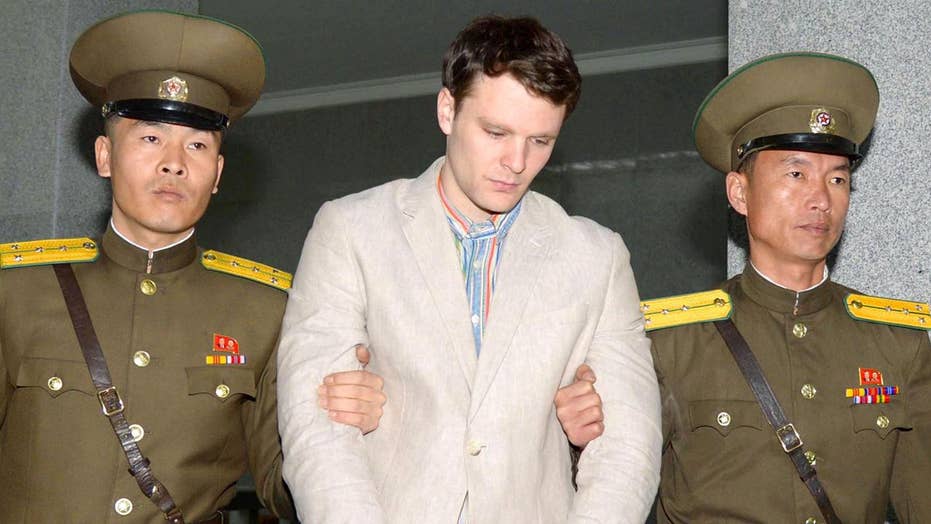 The abuse North Korea inflicted on Otto Warmbier, the American student who died this week after returning home to the U.S. following more than a year of imprisonment, is something up to 120,000 North Koreans – and three Americans -- regularly experience in the country’s concentration camps, according to defectors and analysts.

Jun Heo, who was just a teenager when he was sent to one of the country’s concentration camps, said to Fox News that being beaten black and blue and tortured within an inch of your life was routine. There were about 20 people stuffed into each small cell, he said. The men and women were separated, unless a woman had a baby son. Everyone over the age of 17 was forced to work hard labor in farms from 6:30 a.m. until at least 8 p.m. Cries and screams became the soundtrack of life, but it was after nightfall when the most excruciating howls could be heard, Heo said.

Hapless prisoners, trying to sleep, would wail in pain as their bony bodies broke down from starvation, while at midnight the “secret police” came to take women to be raped.

“We could hear them screaming,” Heo said. “What you can only imagine as the cruelest of things is normal in there.”

His crime? He had fled to China for a chance at a better life. It was November 2005 and Heo -- plus 12 other defectors -- crossed into China and was staying in a “broker’s house” in Beijing. The broker ordered the North Koreans to not leave the house, citing safety reasons. But on Dec. 6, the day before he turned 14, a barrage of Chinese policemen -- armed with guns and electric batons -- knocked down the door and rounded up the terrified defectors.

“The broker also had a gun and an electric bat. He was a spy,” Heo remembered. “I was two days in a Chinese jail and then sent back to the Sinuiju concentration camp in North Korea.”

After several months, he was let go. But in 2008, at the age of 17, a determined Heo defected again – this time for good. Now a 26-year-old political science major at Seoul National University and studying English at the Teach North Korean Refugees center, he wakes up every day with a self-inflicted pinch.

For the vast majority of the 25 million North Koreans, life outside a concentration camp is far from heaven, even if slightly better than what Heo experienced.

From forced abortion and extermination to enslavement, to the sudden disappearance of people in what is termed the “forcible transfer of populations,” life is grim. These forcible transfers can happen to anyone at any time. Soldiers have been known to enter homes and extract entire families, who are never heard from again.

Food is scarce. The United Nations reports that 70 percent of the population -- around 18 million -- goes hungry, with the stunting of children’s growth a “rampant phenomenon” due to the lack of nutrition. Almost 9 million have no health care, and more than 5 million live in squalor because they lack clean running water.

While food may be scarce, distrust is not. From childhood, North Koreans are instructed to report anyone being even mildly nonconformist or speaking of their leadership without over-the-top praise, even in private conversation. Tom Fowdy, founder of the analysis group Young DPRK Watchers, noted that compulsory community meetings are held for singing songs about their leaders and to goad each other into confessing minor crimes.

“There are no decisions people can make by themselves. From the moment you are born, everything about your life is determined,” Heo said. “Every scene, every speech, even the songs of the birds around you, are controlled.”

NORTH KOREA TRAVEL RULE BOOK: HOW TO BE AN OBEDIENT TOURIST IN THE HOSTILE NATION

A caste system means North Koreans often remain in the social rank into which they were born, something determined by a family’s reputation. Sometimes a citizen can move up the ladder to a more privileged caste, depending on one’s perceived support of the leadership, or move down the ladder, depending on one’s links to criminals, defectors or South Koreans.

“Those with a poor songbun (caste ranking) will have poor prospects. But those with good songbun, and especially from families with excellent political and military connections, can expect access to far more privilege and opportunity,” said Chad O’Carroll, managing director of Korea Risk Group, which produces analyses on North Korea. “But regardless of one’s background, most young North Koreans should never expect to leave their country, officially consume foreign-produced information unapproved by the government or show respect to anyone beyond a leader to the Kim family tree.”

Photos of North Korea's leaders must be hung inside every house and kept perfectly clean. (AP)

A North Korean is required to hang in their homes portraits of Kim il Sung and Kim Jong-il, the grandfather and father, respectively, of the current leader. There are routine checks by authorities to ensure these are kept immaculately clean. It is mostly prohibited for one to communicate with others in the world outside. The haircuts are state sanctioned. Pirated modern movies and music occasionally make their way into homes but, if caught, violators can be punished with death.

From a young age, North Koreans are indoctrinated that America is the “cruel enemy that interrupted North and South Korean unification.”