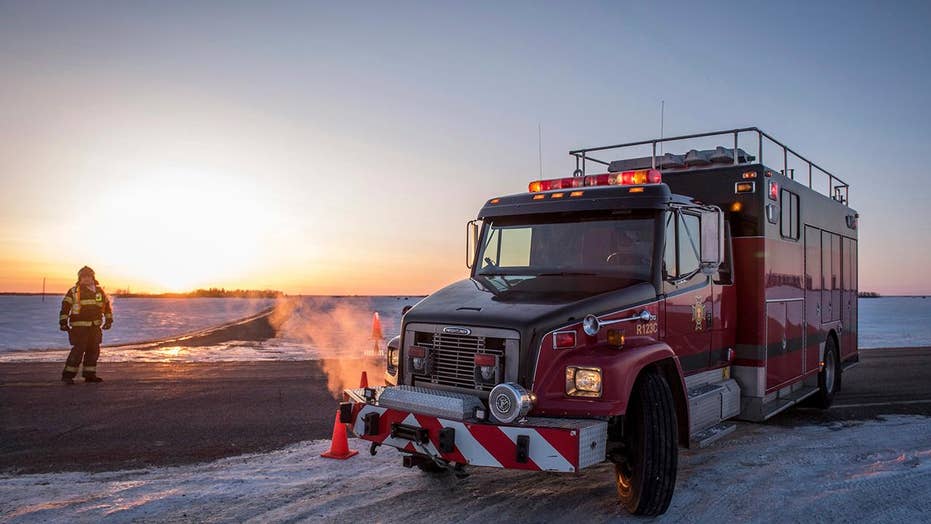 A western Canadian town of about 6,000 people was left devastated after learning that a bus carrying the town's junior hockey team had collided with a semi-truck while traveling to a playoff game, resulting in at least 15 deaths.

At least 14 others on the bus were injured in the Friday crash, police confirmed.

The Broncos of Humboldt, Saskatchewan, were on their way to a game when their team bus crashed, killing at least 15 people, authorities said. (Twitter)

Most of those killed were likely the players on the Humboldt Broncos hockey team, who were between 16 and 20 years old -- though the Royal Canadian Mounted Police [RCMP] would not specify how many of the fatalities were players.

CBC News reported the team’s head coach, Darcy Haugan, was one of the people killed in the incident. Haugan’s wife, Christina, confirmed his death to reporters.

Police did not immediately release the names of the deceased and there was no mention of the truck driver.

President Trump tweeted Saturday that he spoke to Canadian Prime Minister Justin Trudeau and sent his condolences to the victims of the crash.

"Just spoke to Justin Trudeau to pay my highest respect and condolences to the families of the terrible Humboldt team tragedy. May God be with them all!" Trump tweeted.

The team's president said he was "shocked" and devastated by the crash.

"We are just in utter disbelief and shock at the loss that's fallen upon us," Kevin Garinger, president of the Humboldt Broncos team, told CBC. He said he first learned of the accident through a phone call from a fan.

"Our organization will never be the same," Garinger told the Saskatoon Star Phoenix.

People pay their respects at the Elgar Petersen Arena, home of the Humboldt Broncos. (AP)

Police said overnight that the bus had been carrying 29 occupants, including the driver.

Authorities said the crash occurred on Highway 35 in Tisdale, Saskatchewan, about 5 p.m. local time. The town is about 1,300 miles from San Francisco.

The Broncos were on their way to Game 5 of the semi-finals against the Nipawin Hawks. Nipawin is about 164 miles from Saskatoon. After receiving word of the crash, the Hawks announced on Facebook that the game had been canceled.

Myles Shumlanski, father of Broncos player Nick Shumlanski, told the Saskatoon Star Phoenix he went to the scene after getting a call from his son.

Derek Patter, one of the players who survived the crash, was photographed holding hands with two other players in the hospital. Patter’s father shared the image on social media.

Tom Straschnitzki told CBC News his son, Ryan, was injured in the crash.

"He's alive and breathing, and from what we know he has a broken back, and as of now, can't feel anything from his waist down,” Straschnitzki said.

A sign honored the members of the Humboldt Broncos hockey team. (AP)

Trudeau expressed his sympathy to the Humboldt community in a tweet, saying he was "unable to imagine" what the team's parents must be going through.

"It's going to hit the community hard,” he said. “It's not a good day for Humboldt."

Saskatchewan Premier Scott Moe tweeted that there were no words to describe the loss.

"To the City of Humboldt, the entire Broncos organization, and the families impacted by this tragedy, please know you are in Saskatchewan's hearts," he wrote. “Tonight we must pray for these families.”

A photo of the arena where the Humboldt Broncos play in Saskatchewan, Canada. (AP)

The Nipawin Apostolic Church was serving as gathering place for families to receive more information as it became available, the RCMP said.

“We just opened our building here with food and drinks … they can come if they need somewhere to go or someone to talk to,” Nipawin Apostolic Church Pastor Jordan Gadsby told the Star Phoenix. “There’s not a lot of confirmed information at this point. Families are just waiting to hear from their kids.

Penn Lee, the spokeswoman for the town of Humboldt, said grief counselors are available.

"Everybody is just so devastated. These poor young boys," Lee said.

Much of the hockey world issued messages of condolences, including National Hockey League Commissioner Gary Bettman.

"The NHL mourns the passing of those who perished and offers strength and comfort to those injured while traveling to play and be part of a game they all love," Bettman said in a statement.